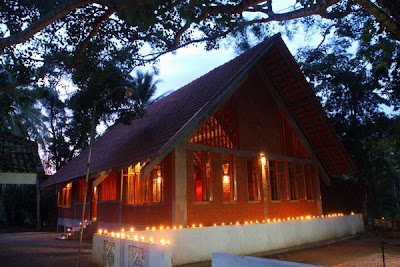 During the 7 year-long tsunami recovery operation I have been at the inauguration of hundreds of buildings funded by the Red Cross and  today I was  thrilled to have cut the ribbon to a community centre which won a very prestigous architectural award for the Thalalla community centre in Matara, Sri Lanka.

Continuing an ancient Buddhist temple building tradition, architect Chinthaka Wickramage drew inspiration from ‘Tam pita viharas’ (building on pillars) for the community centre in Thalalla, Matara. A robust concrete frame has been structured to hold infill panels of exposed red brick and support a clay-tiled roof, blending in with the surrounding temple.

“This is an effort to continue the ‘Tam pita vihara’ building tradition” said the architect. He added that old examples of these buildings consisted of a timber floor on stone pillars, an effective method for keeping dampness and termites away from the timber. “This contemporary interpretation is intended to withstand flooding” explained Archt Wickramage. 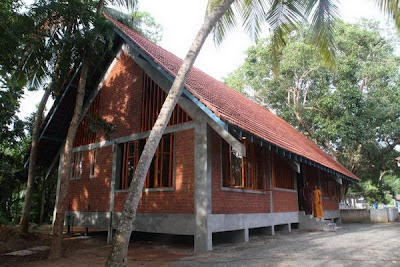 With limited space allocated and budget constraints made allowance for only a one storey building in the space intended for two storeys. Thus the Architect introduced a steeply sloping roof at a 45 degree angle, leaving room for possible later expansion through an additional mezzanine floor. Accordingly, a timber deck or a pre cast concrete slab could easily facilitate expansion across the community centre’s main hall.

The community centre stands three feet above ground level, supported by twelve concrete stilt columns. Pre-cast NERD concrete slabs have been laid to create the floor for the building while concrete pillars and angular roof beams make up its structural skeleton. Six inch bricks were used for the walls with vertically pivoting timber for the windows and doors. Exposed timber rafters can be seen supporting the ceiling-less roof, which is covered with clay Calicut tiles and ridge tiles. (see photo below) 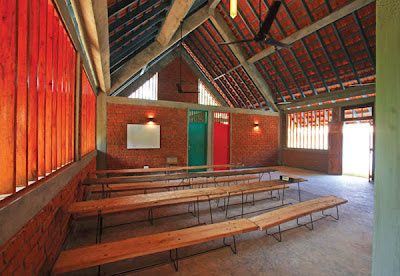 The decision to leave all material in its raw form was taken on site and was unplanned. “I initially wanted to paint the building, and not to have exposed brickwork. Once the contractor started the laying the bricks, it took on a natural beauty,” added Archt Wickramage. The concrete skeleton and roof tiles are left exposed in their raw form. The brickwork and timber have been sealed with a coat of paint and clear varnish. The earthy colours and textured tactile quality left by the exposed material have been contrasted with bright red, blue and green doors and turquoise blue rafters create cheerfulness with splashes of brilliant colour.

Shaded by the branches of the temple’s sacred Bo tree, the community centre blends in with the surrounding temple buildings, while reaching to the same height as the Budu Madura (image house). The windows on either side and the spaciousness of the main hall allow penetration of natural daylight into the centre’s interior leaving room for ample cross ventilation. Additionally, artificial lighting has been supplemented in the tradition of ‘vesak lanterns’ in the spacious double height multi-purpose hall. 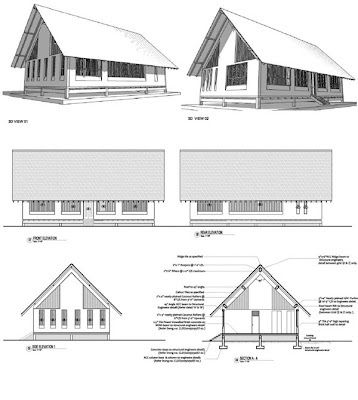 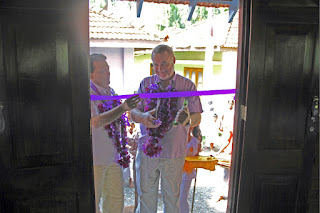 I was with the President of the Sri Lanka Red Cross Jagath Abeysinghe when we inaugurated the Thalalla Community Centre in Matara district. Photo left

We spoke to people from the three surrounding villages who will be using the community centre and all made similar comments is they "love the look of the outside and the inside of the building" and the village chief said they were so pleased to have a place to meet and run community projects.

So the sun is finally setting on a seven year and a quarter year Red Cross tsunami recovery operation in Sri Lanka as we finally finish our last two projects.

Our last tsunami project will be opened on 20 April 2012. This is an American Red Cross funded/IFRC/Sri Lanka Red Cross water supply for the southern city of Galle. This pipeline will bring quality safe water to 20,000 households which is approximately 100,000 people.

I suppose the logical question to ask is why has it taken so long. Many of these projects were not conceived until three years after the tsunami struck when the needs became apparent as affected people were re-located from coastal areas, and it was found some facilities were lacking. Using TRIAMS - the tsunami recovery impact assessment and monitoring system - many gaps in community facilities were identified.

With so much money having been so generously given by ordinary people from around the world, transparency. quality and accountability were  essential elements and this is where Governments in tsunami affected countries  put strong anti-corruption mechanism in place to ensure that all funding was correctly spent. We have supported this through approaches such as TRIAMS—the tsunami recovery impact assessment and monitoring system. The purpose of the TRIAMS initiative was to assist governments, aid agencies and affected populations in assessing and monitoring the rate and direction of the post-tsunami recovery throughout its duration. During the process, the system helps governments, aid agencies and donors to be accountable for the end results of their efforts. Is the recovery effort achieving the desired results? Are the results distributed equitably? Where are the priority gaps? These are some of the questions TRIAMS sought to answer.

In January this year (2012) John Ekelund from the Finnish Red Cross visited Sri Lanka, I knew he had worked in Sri Lanka for almost four years on the tsunami recovery operation so I took the opportunity to get his opinion on a number of issues as I respect him immensely for the work he had done.


" It was the commitment of Red Cross volunteers and staff that gave us the edge," he said. "We also displayed vision, we thought ahead when planning for schools or hospitals and tried to visualise the expanding needs in ten years. So we built for the present and the future and this approach has really paid off."

John was somewhat scornful of organisations that came in and with poor planning, and little liaison with community or local authorities, rushed through construction, took photographs and left, often leaning many liabilities and defects for other to manage.
" The Red Cross built quality houses, hospitals,water systems, schools and clinics and took a holistic approach and when working with communities, we built not only houses but toilets, clean water to each house, livelihoods and even playgrounds for the children." he said.

Since the tsunami struck over seven years ago, I have been working on the tsunami recovery operations in India, Sri Lanka, Maldives and Indonesia where I spent four years.

For each of the seven solemn years I have been at a commemoration ceremonies in India, Indonesia, Thailand and last year on 26 December, in southern Sri Lanka. .I can recall the grief, emotions, wailing, the blank look on faces as famiies floated candles out to sea on rafts, or tied minature lanterns to kites and sent into the night sky in Phuket.

I can repeat what I have said and written hundreds of times in praising the Red Cross volunteers, staff, engineers, day labourers, the affected communities in displaying unpreceedented solidarity and commitment in responding and building back better.

Lessons were captured from the tsunami and the best publication by far is the Tsunami Legacy, and another cracker, A Ripple In Development. Although good, these two publications did not drill in deep enough to where recovery really goes off the rails, and that is in the poor or weak governance at local, regional and national level. We saw poor governance after the huge tsunami in Japan and the earthquake in Christchurch. It is something I plan to write about when I get time. So after 7 years and 4 months, I can safely say the tsunami recovery operation is finished in Sri Lanka and I feel it so fitting that the IFRC and Sri Lanka Red Cross have won an architectual award for its vision and desire to build back better.

Hmmm... on the QT, I'd be interested to know the names of organizations that came in, built shoddily, took photos and left. Donors to those orgs should be made aware of what was done with their money, no?..... just sayin' ...

There were quite a few John. I do not want to get into naming and shaming here, but I know back donors know who they are and they will be struggling as a result of shoddy work.

Claim free bitcoins from CLAIM BTC. Up to 57 satoshis every 20 mins.