Pakistan's army chief calls for the demilitarisation of Siachen Glacier 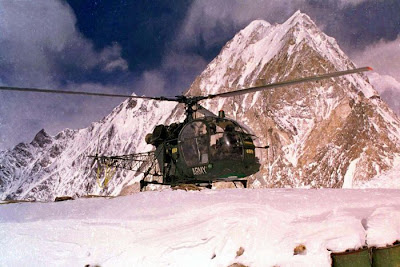 Pakistan's army chief has made a rare call for the demilitarisation of the world's highest battlefield after touring the site of an avalanche that buried 129 Pakistani soldiers near the border with rival India.

General Ashfaq Kayani was speaking 11 days after a Pakistani army battalion headquarters near the Siachen Glacier in the disputed Kashmir region was engulfed.

The tragedy has revived criticism of the 28-year conflict over the glacier, which critics say is futile.

General Kayani, arguably the most powerful man in Pakistan, said the stand-off has been costly in many ways, from defence spending to the environmental impact of deployments in the area.

"I think this is one good enough reason that this area should not be militarised," he told reporters in the northern town of Skardu after viewing the avalanche site with Pakistani president Asif Ali Zardari from a helicopter. 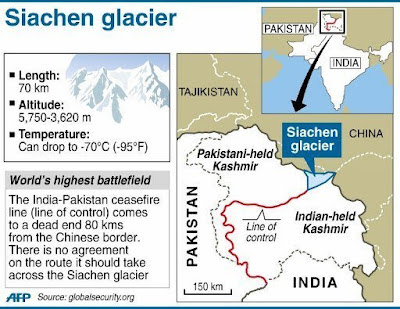 Rescue efforts are still under way for the buried soldiers and civilians near Siachen, with workers pushing through snow, mud and boulders using heavy machinery, life-detection equipment or even their gloved hands.

Highlighting the constant dangers of operating in the forbidding expanse, he instructed reporters to drop their equipment and run to a safe spot if avalanche warning whistles are heard.

The army has listed the names of the missing soldiers and civilians on its public relations website.

There have been no death announcements and the military says it will not abandon the search and rescue effort.

"We will continue to make all efforts. Whether it takes 10 days or 10 months or if it takes three years, we are not going to give up on this," General Kayani said.

"If we have to dig out this mountain, we'll dig it out." 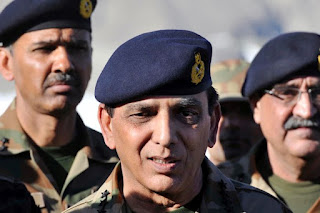 General Kayani says the stand-off has been costly in many ways. (AFP: Aamir Qureshi)

Siachen is in the northern part of the Himalayan region of Kashmir. The no-man's-land is 6,000 metres above sea level. 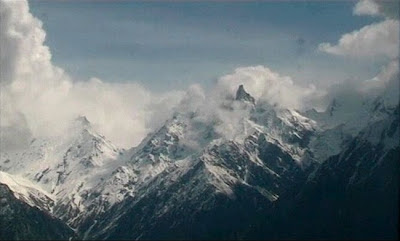 Indian and Pakistani troops in Siachen have fought at altitudes of over 20,000 feet in temperatures of minus-60 degrees Celsius.

Between 10,000 and 20,000 Indian and Pakistani troops are stationed in the mountains above the glacier.

Although General Kayani stressed that it was the duty of Pakistani soldiers to defend their country no matter how harsh the conditions, he also said a political solution was needed to end disputes like Siachen.

"It is for the leadership of both countries to find a solution," he said.

"We hope and we wish that the issue is resolved, so that both countries do not have to pay this cost, pay this price."

Generals have ruled Pakistan for more than half of its 64-year history, through coups or from behind the scenes.

They set security and foreign policy, even when civilian governments are in power, as is the case now. Military spending consumes just over 17 per cent of the state budget.

A tentative peace process is under way and ties between Islamabad and New Delhi are at their warmest in years, with recent high-level meetings.
Posted by Bob McKerrow - Wayfarer at 07:44

Kia ora Bob,
Let us hope General Kayani's thoughts are heeded by both countries. That men of two generations have lived and fought over such inhospitable terrain is just a brutal reality, as is all war.
Cheers,
Robb

I too am hopeful Gen. Kayani can build a dialogue with his colleagues across the border, as no one can win this futile conflict in such an inhospitable region. The money saved could go towards poverty alleviation.

I do not know if it's just me or if everybody else encountering problems with your website. It seems like some of the text on your posts are running off the screen. Can someone else please comment and let me know if this is happening to them as well? This may be a problem with my internet browser because I've
had this happen before. Appreciate it

I've been surfing online more than three hours today, but I never discovered any attention-grabbing article like yours. It is pretty worth enough for me. Personally, if all website owners and bloggers made excellent content material as you probably did, the net will probably be a lot more helpful than ever before.

I was suggested this web site by my cousin.
I am not sure whether this post is written by him as nobody else know such detailed about my problem.
You're wonderful! Thanks!

It's an awesome post designed for all the web viewers; they will get benefit from it I am sure.

Fantastic blog! Do you have any recommendations for aspiring writers?
I'm planning to start my own website soon but I'm a little lost on everything.

Would you suggest starting with a free platform like Wordpress or go for a paid option?
There are so many choices out there that I'm completely confused .. Any tips? Cheers!

Feel free to surf to my homepage: workouts to improve vertical

I know this website provides quality based articles or
reviews and extra data, is there any other website
which presents such information in quality?

Write more, thats all I have to say. Literally, it
seems as though you relied on the video to make your point.

You obviously know what youre talking about, why throw away your intelligence on
just posting videos to your site when you could
be giving us something informative to read?