DAMAGED: Gardiner Hut on Mt Cook was hit by an avalance.

Gardiner Hut was one I stayed in a number of times  and was saddened to see if hit by an avalanches. With the top falling off Aoraki Mount Cook in 1991, nowhere is really safe in our alps. 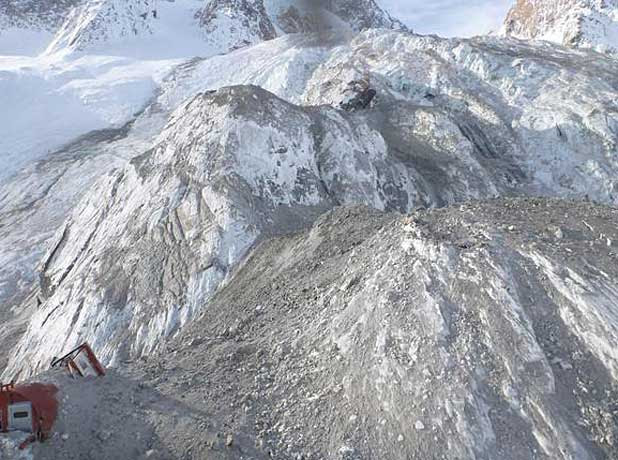 AVALANCHE TRAIL: The Gardiner Hut has nearly disappeared under the debris.
A large and "very rare" avalanche has engulfed a climber's hut on Mount Cook Aoraki.
New Zealand Alpine Club general manager Sam Newton said it appeared that no one was injured in the large rockfall, which may have happened at night.
"The rockfall covers a very, very big area,'' he said. "Rockfalls like this are very rare and hardly ever approach this size. This one is big.''
The rockfall happened on the South Ridge, or Hillary Ridge, of the mountain and swept down Noeline Glacier and over Pudding Rock, where the Gardiner Hut sits. It was reported by a pilot yesterday.
Photographs show the tin hut, which can sleep about eight people, engulfed in small rocks and moved off its foundations.
The rockfall is the third to strike the area in the last 18 months.
There was one on the other side of South Ridge near Ball Pass and another near Mount Haast.
DOC said there were no records of visitors to the area at the time of the avalanche and aerial investigations did not indicate anyone had been caught in the incident.
The hut was in a remote spot, used only by experienced alpine climbers.
DOC services manager Mike Davies said following a helicopter inspection it was working with GNS Science to assess the stability of the area before a more detailed investigation of damage.
Until then, people were asked to keep out of the Noeline Glacier region of the upper Hooker valley.
The Hooker Track is unaffected.
Posted by Bob McKerrow - Wayfarer at 15:48