This article challenges the work that many humanitarian organizations are doing and it is incumbent upon us to scrutinize these allegation very seriously. Please read this article recently written by Mark Anderson in The Guardian and leave your comments if you wish. At the end of the article I have included feedback from two leading humanitarian analysts, Bill Nicol and Liliane Fan. Bill is the author of Tsunami Chronicles, a superb book for disaster managers. 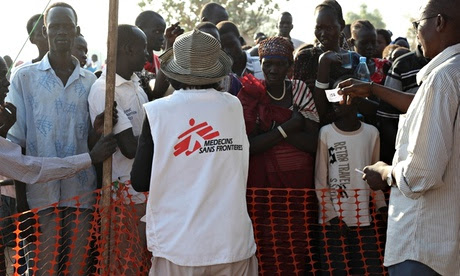 A Médecins Sans Frontières nurse in Juba, South Sudan, performs triage on people waiting to be seen by the NGO's medical team. Photograph: Kim Clausen/MSF
The UN and international NGOs are failing to respond to humanitarian emergencies despite having more resources at their disposal than ever before, a medical charity has warned.
In a damning report that criticises crisis management in urgent situations such as conflict and mass displacement, Médecins Sans Frontières (MSF) says many organisations are more concerned with risk aversion and securing funding than providing a serious relief effort.
"While it is core business for the humanitarian system, emergency response capacity has been undervalued and under-prioritised," the report says. A lack of technical capacity plagues current responses to humanitarian emergencies, it adds.
In recent years, many NGOs have rebranded as more generalist development agencies, and there are fewer focusing on specific aspects of emergency response. This has compounded the problem, the report adds. "In some cases, we found that technical capacities were not as they should be, for example, in health, water and sanitation, or assistance to victims of sexual violence," MSF says.
The report is based on interviews with 116 humanitarian workers, and analyses the international response to conflicts in the Democratic Republic of the Congo, South Sudan and Syria, all of which have caused mass displacement and required an urgent humanitarian response.
Relief efforts in these countries have been marred by logistical constraints, which limited assistance to rural communities, the report says. "There's a bias towards what we call easier projects: accessible areas, places you can get to by road, camp populations with registered refugees, anything near the capital, and in conflict zones, anything that's government controlled," said Sandrine Tiller, co-author of the report.
MSF is especially critical of the UN, which the report claims is at the core of many of the system's dysfunctions. "The current UN system inhibits good decision-making, in particular in displacement crises where a number of UN agencies have a responsibility to respond," said MSF's international president, Joanne Liu.
Tiller says subcontracting is drawing resources away from the ground and diverting them to western offices. "It's just a chain of subcontracts," she said of the current response system. "It goes from the donors to the UN agencies to an implementing NGO to another local NGO, and at the end, there's no one in the field. There's a dearth of attention to those difficult areas."
Part of the problem was that relief operations have shifted to offices in Geneva, London and New York, Tiller says. "If you go to any bar in Juba or in Kinshasa and talk to the real humanitarians in the field, this is what they're complaining about," she said. "They would say their headquarters have become too bloated, it's become a massive bureaucracy, that they constantly have to feed the headquarters beast with information. They feel they don't have enough time to talk to refugees, they have to spend more of their time doing reports. Human contact is kind of lost."
Tiller points out that MSF "is not immune" from the issues outlined in its report. "The system under-capacitated – we can just work from nine to five," Tiller said. "So who's going to do the night shift?"
Adrian Edwards, spokesman for the UN refugee agency, UNHCR, said: "Anyone who has been in a full-blown humanitarian emergency will know that they can indeed be chaotic and dangerous, especially in the initial phases. It is, nonetheless, vital that people in acute need get the help they need. UNHCR constantly looks at ways to improve the way we work, and we are viewing MSF's criticisms in that light."

Thanks to Mark Anderson for permission to run this article he wrote for the Guardian on Monday 7 July.