Story of a typhoon Haiyan survivor. 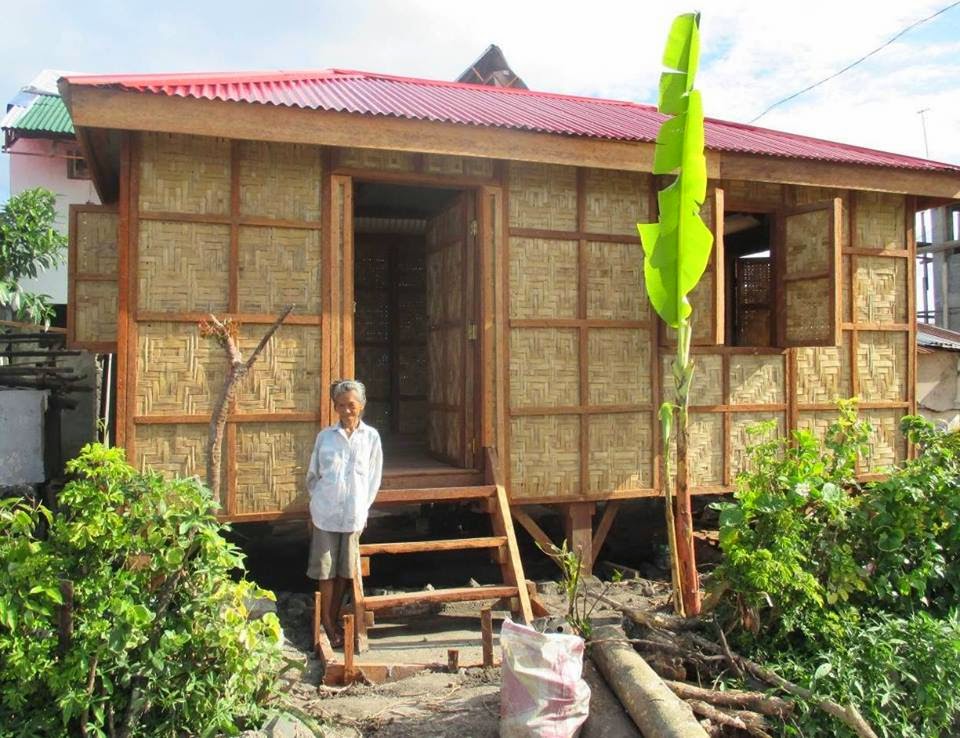 Her name is Anatalia M. Cabrera, 68 years old, singled-female household who was born on December 1, 1945 in Brgy. Poblacion, Tolosa, Leyte. She is popularly known as “Mana Tayang” in the locals and has been a resident of Tolosa for most of her existence. She is the 3rd child amongst 4 children of a farmer, Mr. Eleuterio and housewife, Mrs. Angela Cabrera.  Growing up to them was not that much easy, Anatalia was not born with a silver platter or a golden spoon instead came from humble beginnings and had her fair share with hurdles in life. She came from a poor family, “there are days that we are broke and something to eat was scarce”, as she recalls.
Anatalia had troubles in schooling. She admits she was not on top of the class and don’t have much interest in getting an education which entirely affected by financial capability of her family.
At the age of 18, her mother got sick and was diagnosed with tuberculosis which needs a continuous medication for 6 months. It was one of the turning point where they had to work extra hard to earn for a living. As to his father, he tries to make both ends meet. By the age of 24 which Anatalia was still on her secondary education, her mother died. Three years later, her father died because of beriberi disease which left them as orphans. Anatalia had gone through everyday struggles to survive since all her siblings have built their own families thereafter.
At the age of 27, she was forced to work away from Tolosa to look for a better source of living. She worked in Manila as a residential cook for 3 years and at the same time sends herself to College. Portion of her salary goes for expenses of schooling and some became her savings. She was a self supporting student but was not able to finish College due to financial constraints.
After working in Manila, she went back to Tolosa to settle. All her savings was spent for the improvement of the house left by her parents which she happily accomplished the construction of her latrine and kitchen. She started to put up a small variety store which sells cooked and raw vegetables. Sometimes she also sells candies and other goodies outside a primary school. It was her typical activities of everyday living. On the year 2012, Anatalia joined an organization called Bayanihan which was composed of 12 members and their main objective was to generate livelihood for their members through buy and sell of rice grains.
Anatalia is also a devout and been active in Church activities such as Catechism, in fact she is part of a Church group called Catechumenate which conducts religious and values education in some schools.
To date, she is now an elderly living alone and her neighbors became the major support systems in times of hardships or needing help like during disasters.

TYPHOON HAIYAN:
Few days prior to the disaster, news started to emerge regarding the birth of Typhoon Haiyan or locally named as Typhoon Yolanda. At first, Anatalia did not felt any urgency and threat to the typhoon because Philippines had been through such a lot though can’t help to sense a containable mild level of anxiety. Additionally, she recalled, “There was still a fine weather, mostly sunny and seldom raindrops. No hints the typhoon can be bad as it was”
On November 6, 2013, news started to be more serious and persistent in advisory for the forecast strength and foreseeable devastation that the typhoon can bring. At this point, Anatalia has thought of the potential grievous effect of the upcoming typhoon.
On November 7, 2013, Anatalia visited the Church, asked for guidance and protection from the Typhoon Haiyan. Did confession and prayed the rosary fervently. She also prepared clothes, foods and other necessary things she might need during any emergency situations.
On November 8, 2013, at around 1am in the morning, strong winds start to blow in until 5am and Anatalia had still prepared to go to Church. By 6am, winds became stronger and zero visibility on the area. She knew that the worse has now started, thus she was helpless and all she did was pray. At the height of typhoon, Anatalia was asked to evacuate her house and went to her distant neighbor’s house. She went out of the house with a blanket overhead and carrying the emergency bag that she prepared. Unfortunately, the house also was wrecked by the typhoon. Anatalia was even hit by a stone on the head from the raging wrath of the typhoon. They had to hide underneath the sink until the typhoon pass. Afterwards, they transferred to another house. Anatalia was not able to take breakfast and lunch but was not also feeling any gist of hunger. By noon, she went to see her house and found that it was severely destroyed. All she could find was torn parts of her house and broken bricks. It was a heartbreaking moment for her, she was left with nothing. Nevertheless, she never loses hopes. She prayed for wisdom that she may be able to accept the aftermath situation.
She stayed in her distant relative for a week. At that time, no electricity, no source of communication and no open stores to buy for foods. They were all dependent to given reliefs from different organizations for her to survive everyday. Fortunately, there was assistance provided to her like tarpaulin and construction materials that helped in building a makeshift room for her to stay. A week after, she started cleaning her area.
She joined a cash-for-work program, where they had to clean particular areas of the town. Activities include sweeping roads and disposing garbage. Her earnings were spent in the labor cost of making a better room for living. The room built was not enough to protect her from the cold weather and heavy rains.
By the month of April 2014, the Red Cross started its shelter project intervention in the Municipality of Tolosa. She underwent the process of house assessment, interviews, revalidation and others. Fortunately, she was picked to be the very first core shelter beneficiary of the shelter project. For her, it is a huge blessing and an ultimate gift that she couldn’t ask for more. It has far exceeded her expectations on the help she could get. Provided by Spanish Red Cross who worked with the Philippine Red Cross in building this home.