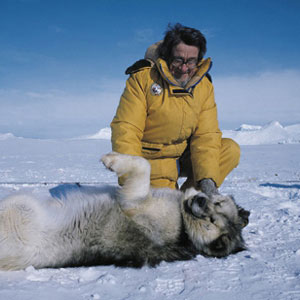 NORMAN HARDIE - OBITUARY by Colin Monteath
I first met Christchurch mountaineer Norman Hardie in May 1983 outside my favourite old bookshop in New Regent Street. At the time I was Field Operations Officer for the New Zealand Antarctic Research Programme so I introduced myself and asked Norman if he fancied a 5-month stint as leader of Scott Base. I knew that Norman had been to Antarctica before as a survival instructor in the early 1960s and, in 1967, as a surveyor with Sir Edmund Hillary’s New Zealand expedition that went on to make the first ascent of the elegant Mt Herschel in North Victoria Land.
I felt sure that Norman's mana as an internationally-recognised mountaineer and his reputation as a skilled, no-nonsense civil engineer would be the perfect skill-set to take charge of not only the Scott Base staff but to solve the complex logistic puzzle that is New Zealand's summer science programme. Sure enough, a few weeks later, Norman sat beside me to start his indoctrination into how some 300 people would meld together into a cohesive team. A friendship started here at my desk and carried on during that summer at Scott Base has endured and deepened over the years.
Norman David Hardie was born in Timaru on 28th December 1924, one of three sons and five daughters of George and Mabel Hardie. He was educated at Timaru Boys’ High School then at The University of Otago and The University of Canterbury, graduating with BE in Civil Engineering. His first job, in 1948, was with the Ministry of works at Lake Pukaki. In 1950 he moved to the Wellington Hydro office. By 1951 Norman was in London and for the next four years he worked for a consulting engineering company on structural and water scheme designs. While there, in 1951, Norman married University of Canterbury friend Enid Hurst, daughter of Colonel H.C Hurst.
After his first expedition to Nepal in 1954 Norman returned to Christchurch to work for EGS Powell as a consulting engineer. From 1958 to1963 Norman was a partner in Stock & Hardie consulting engineers, then Hardie & Anderson, structural engineering consultants (1963-83). Norman was a site engineer for Baigent’s timber mill (1984-85) before retiring to work as a private consultant working from homes in Halswell and Cashmere.
Norman was the Chairman of the Canterbury Branch of the Institution of Engineers (1969-71) and a Director of Farrier Waimak Ltd., (1971-84) Norman was made a Distinguished Fellow of the Institution of Professional Engineers. 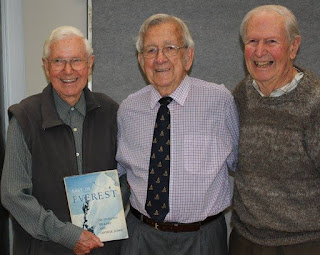 Norman Hardie ( centre)...with Geoff Harrow ( left) & Bill Beaven...members of the 1954 NZAC 'East of Everest' Himalayan expedition.
Norman’s mountain life started during the late 1930s as a government deer culler mainly in the Canterbury high country, work he continued during his years at university. On one hunting venture, after cycling from Timaru to Bealey, he shot four deer in the Waimakariri river basin. Tired out, he broke into Cora Lyn farmhouse to sleep the night, leaving a note about his actions upon leaving in the morning. Twenty four years later, he and Enid bought that house, owning it for 22 happy years.
During his final university years Norman’s interest in hunting led him to join the Canterbury University Tramping Club and this soon fostered a desire to take up mountaineering. Climbs at the head of the Rakaia followed in 1946, as did ventures into the Landsborough river catchment, a region that held a life-long fascination where he completed numerous new routes on peaks such as Mts Dechen, Strachan, Fettes and Elliot. During Norman’s time at university he fostered enduring friendships with climbers Jim McFarlane, Bill Beaven, Bill Packard and Earle Riddiford who all went on to join the New Zealand Alpine Club. As fresh graduates bound for employment at the end of the 1947 summer, Bill Beaven, Earle, Jim and Norman completed the first ascent of the still-rarely climbed South ridge of Sefton, approaching it from Fyfe Pass, the Landsborough and Harper’s Rock.
Based at Pukaki in 1948 as an engineer Norman was awakened one night by Bill Beaven to tell him he was needed to help rescue Ruth Adams who lay badly injured close to the summit of La Perouse. Adams had fallen during a climb with Ed Hillary and guides Mick Sullivan and Harry Ayres. Ruth's subsequent lower down the West Ridge of La Perouse and epic stretcher-carry down the Cook River to Fox has entered New Zealand mountain folklore, with Norman’s role being written up in his autobiography On my Own Two Feet (2006). Norman told me in recent years that he felt the rescue became a pivotal point in New Zealand mountaineering whereby amateur climbers like Ed Hillary who had always climbed with a guide saw what other amateur climbers were capable of; in turn, the amateurs learning much from the professionals. The bushmen who cut the track up the Cook river taught much also. Norman and his mates realised that the time was right for them to tackle bigger objectives, with luck overseas. As one, their dreams turned to climbing in the Himalaya. Engineering work and marriage in London followed, interspersed with climbs in the European Alps. While in England he befriended famous English climbers Eric Shipton, Bill Tilman, Charles Evans and John Hunt. Lacking Himalayan expedition experience, his application to join John Hunt’s 1953 Everest team was turned down. However, as a mountaineer based in London, he was asked by John Hunt to volunteer his time and expertise to co-facilitate the ground work for the 1953 Everest expedition that was sponsored by the Royal Geographical Society.
Norman finally got his break to climb in the Nepal Himalaya by sailing out to Bombay to join the 1954 New Zealand Alpine Club Barun valley expedition led by Ed Hillary. Some 20 new climbs were completed in what is now the Makalu-Barun National Park, including the 7000 metre plum Baruntse. I always envied Norman’s first ascent of Pethangtse, an elegant outlier of Lhotse that straddles the Nepal-Tibet border. He used the summit as a survey station as part of his expedition mapping programme. Charles Evans was invited on this highly mobile Kiwi trip, in part as repayment for New Zealanders being invited on British expeditions starting with Dan Bryant in 1935.
Norman’s friendship with Charles Evans deepened and this led to him being asked to be deputy leader of the 1955 British expedition to Kangchenjunga, the world’s third highest mountain. Norman helped to refine the oxygen equipment for this venture that was ostensibly a reconnaissance though it quickly turned into a full-blown assault on the summit. Joe Brown and George Band reached the summit first with Norman and Tony Streather summiting the following day; all four climbers avoided treading on the actual summit in deference to local beliefs. I always liked Norman’s tale from base camp of Evans asking him to take two of the climbers who eventually summited aside to teach them how to use crampons. 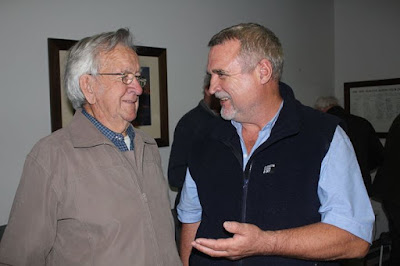 Norm Hardie (left) talking to Bob McKerrow at the the talk Norm gave to celebrate the 60th anniversary of his ascent of Kanchenjunga.
After the Kangchenjunga climb Norman and some Sherpas set out to walk all the way to the Khumbu where he met Enid. This journey forms the basis of Norman’s first book In Highest Nepal (1957) that was later translated into German and Japanese. Following Norman’s participation in Ed Hillary’s 1960-61 Himalayan Scientific and Mountaineering (Silver hut) Expedition that wintered under Ama Dablam, the Khumbu became central to Norman’s life for several decades. In 1963 he developed and constructed an improved water supply from a spring above Khumjung village. He played a key role in the functioning of the Himalayan Trust, remaining on its board from 1966-88. During this period Norman and Enid made 14 visits to Nepal for school building, national park work and re-afforestation programmes. In 1986, sponsored by the New Zealand Government, Norman went to the Khumbu to report on the state of their forests and to make recommendations for their future care, which eventuated in the establishment of the Sagarmatha National Park.
Norman served for 21 years on various New Zealand Alpine Club committees and was NZAC President from 1973-75. He also served on the Arthur’s Pass National Park Board from 1967-79 and on the Craigieburn Forest Park Committee 1980-87, being Chairman for two years. He was a member of the Christchurch Civic Trust Board 1988-92 and The College House Board 1971-97. In 1992, Norman was awarded the Queen’s Service Order for services to mountaineering and conservation. He was an Honorary Life Member of The Alpine Club (UK) and The Himalayan Club and Life Member of the New Zealand Antarctic Society and the New Zealand Alpine Club.
Norman retained a deep interest in engineering and mountaineering throughout his life, attending and giving lectures and offering advice to younger climbers who found their way to his door. He helped innumerable authors get Nepalese facts straight as well as offering editorial advice to draft manuscripts and journal articles. Many of New Zealand’s top climbers owe a debt of gratitude to Norman’s mentoring and instruction during their formative years.
While living in a semi-rural property in Halswell, Norman and his ‘ Last of the summer wine’ enthusiasts bottled their own wine. It’s time to raise a glass to Norman Hardie, one of New Zealand’s outstanding mountaineers.

Hello Bob. My 2nd great grandfather was William McKerrow, brother of James McKerrow. One of William's daughters, Elizabeth, married John Huxtable and that was my maiden name.
I've followed your blog for a couple of years and have enjoyed reading about James. He and his brothers were a tough lot of Scotsmen.
I left NZ a few years ago and now live in the US.
I'm very interested in the book you quoted from, "Your Folk And Mine--A History Of The McKerrows"
The only copy I know of is in the National Library of Scotland, and my attempts to find the author have yielded nothing. Would you have any idea where a copy of this book may be purchased. I have McKerrow relatives, my grandfather's cousins, who are also interested in purchasing a copy.
Best Regards,
Shayne Sawyer

thank you very much

If you must contact any firm with reference to securing a loan online with low interest rate of 3% and better repayment plans/schedule. You can contact them via email on { certifiedloanservice@gmail . com } or whatsapp @ +15754148400