The death of the King of Afghanistan 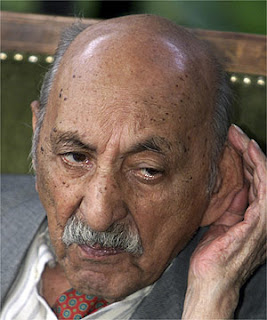 Today King Zahir Shah died. For 40 years he ruled Afghanistan and there was peace and stability during his reign.

I would like to tell a personal story about the King as told to me my old friend Masoud Khalili, the then Ambassador to India.

On Wednesday I visited the Afghan Ambassador to India, Masoud Khalili.

I visited him at his residence. He warmly greeted me after talking poetry and matters of regional interest, he mentioned that King Zahir Shah is here at the moment in Delhi getting medical treatment. "He comes round almost every evening and sits outside, enjoying the garden, the crescent moon and the sky and stars. He speaks so highly of my father who was his advisor." (a court poet he would be called in the old days.)

Masoud went on to say "He kept praising my Father and asked me to tell him a sufi story. So I told him the story of a rich man, a ruler coming to a Sufi and telling him I have all the gold, silver and diamonds I want, hundred of palaces, as many wives as I want and I own half the world. I count my treasures and property regularly and I am a rich man. What else do I need ?

The Sufi asked him, "are you going to die ?" to which the Rich Ruler replied, "Yes !"

The Sufi replied " Then why count the belongings of a dead man ? "

Sitting outside under a beautiful night sky with the King last week, Ambassador Masoud Khalili went on to tell the story the King told him of a major crisis he faced as a young King in 1946. " My old Uncle was the Prime Minister and my adviser and he came to me saying that it is important we hang (take the life) of the young Poet Khalili because his poetry is controversial. The King said "I don't agree."

However, the next day, the Prime Minister sent a written order, stating that Khalili, the poet should be killed. " I refused to agree, but wrote on the PM's paper in French, I won't agree to this and if you persist in Khalili being hanged, I will resign."

"So my father Khalili was spared," said the Ambassador. "I thanked the King not only for saving one, but two, as I was born the following year."

Then he went back to the many evenings he had spent in the last week with the King of Afghanistan, sitting on the grand lawns, on simple plastic chairs which I saw in the garden. No thrones, no carpets, no musicians, just the King and the son of a poet who he spared the life of.

"What more to life is there" said the King as he looked to the heavens. "The sky, the crescent moon and this beautiful garden."

The ambassador said to me "yet again the King spoke of my father's poetry and he asked me to quote some of them. " I could see the tears in his eyes as he praised my father."

All the time I was thinking said Masoud, " Is it not the poet who praises the King, but here tonight the King is praising the poet ?"
Posted by Bob McKerrow - Wayfarer at 05:34

Email ThisBlogThis!Share to TwitterShare to FacebookShare to Pinterest
Labels: Afghanistan - Death of a King

United Guard Force In India is Well Reputed Security Guard Agency In Mumbai. We are having clients who are happy with our Security Guard Services. We We offer our services for Hotels, Banks, Residential areas, Mall, Events, etc..