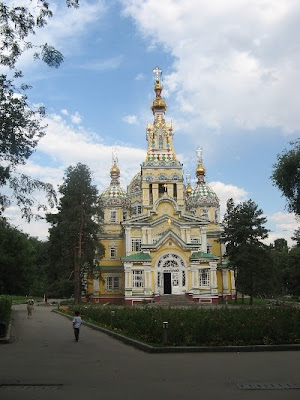 At Calcutta railway station in 2004 I remember splitting my sides with laughter when I read the afternoon paper which had a banner on the front page;

"Pak Couple Loves Delhi Prick Trick" see page four, and on page four the headline it was even better.

The story was s about a Delhi acupuncturist who cured two Pakistani diplomats.

I am writing this at 5 a.m watching the first light kiss the Teinshan mountains from my room in Almaty. Almaty seems so far away from Calcutta, but it is linked by a common thread of networks - the Silk Route.

So I have finally made it to Kazakhstan to make a pilgrimage to Turkestan and Otrar and being trained for the journey by my brother-in-law and guide, Erlan. He is also bringing our other brother-in-law, Suin. We have married three beautiful daughters of Bolat and Raiza, a wonderful Kazakh couple.

On 28 th and 29th June evenings, we got into serious training for our journey to Turkestan. Erlan, is making sure I build up my strength with platefuls of horse meat, shanks of beef, Balsak, (bread deep fried in fat) Bisbarmak. All traditonal Kazakh food. Yes he would be my guide along the silk route from Almaty but judiciously reminded me I needed be respectful of Kazakh culture and its Islamic religion, by ensuring I was prepared for this holy place.

This promises to be an historiv journey.

Erlan started instructions: “ We will need to buy a sheep and sacrifice it, and then share it with as many poor people as possible to get Allah’s blessings before we venture to the Mausoleum of Khoja Ahmed Yasavi and later the tomb of Ablai Khan, who my eldest boy in named after.

As we tucked into another plate of horse meat, Erlan told another haunting story of Turkestan and why we need to be prepared. With his handsome Kazakh face taking on a serious look, he told of a body guard to the Prophet Mohammed who was so alert, so tough, that he was never killed by a man. Later when living in Turkestan he came to prayers and as he was praying was killed by a women. Opponents put his head on a spear, and tried to desecrate it, but it fell down a well and they were never able, or possibly too afraid, to retrieve it. Today, at Turkestan, if you put a bucket down this well, what water comes up is a reflection of you. The lesser the water, the lesser a person you are, If its full, it shows you are a good person. Erlan added, “if there is no water or dirty water in the bucket, then you are a sinful person. #

I prepare in awe.

Each city or village on the great Silk Route network I have had a soul wrenching experiencing. I have visited over 200.

In unravelling cultural layers and geographical knots along the Silk route during the past 30 years has been a barrel of laughs, tears and awesome discovery.

I have been stuck for days on snow bound passes at almost 5,000 metres in the Pamirs, nearly dying of heat exhaustion in Balkh, the Mother of all Cities, at 49 oC and just a spit away from the Oxus river. jailed in a locked container by a zealous Mujahadeen for 12 hours in the Hindu Kush, and sleeping in a Yurta with Kara Kyrghis herders in The Heavenly mountains (Tienshan), In Delhi I was threatened by Eunichs,, propositioned by gay men in Lahore, ridden on camels to Agra and by Elephant to the Amber Fort in Jaipur, and by horse as I accompanied Kuchi nomads in Afghanistan, stripped searched by a stunning female blond jack-booted, mini-skirted border guard at Termez as just after crossing the Oxus River from Afghanistan into Uzbekistan, entertained by mystical boul singers in Dhaka, healed at the tombs of Sufi saints in Bokhara, and discovered the meaning of love in Ashgabad and Agra.

As I prepare for Turkestan I think of having to sacrifice a sheep and worry if will be any water in the bucket at Turkestan well, and if so, what colour ?

More in a few days time.

Earning money online never been this easy and transparent. You would find great tips on how to make that dream amount every month. So go ahead and click here for more details and open floodgates to your online income. All the best.