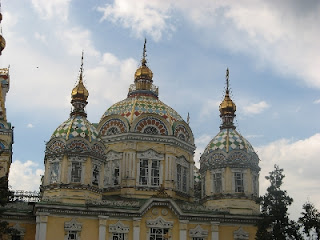 Nazira is a fascinating woman. She was born on the Silk Route at Shymkent, Kazakhstan, close to the Kazakh – Uzbek border. Shymkent is close to Turkestan and as a child and teenager, Naziri frequently visited the Mausoleum of Khoja Ahmed Yasavi and the tomb of Ablai Khan at Turkestan. It was at this holy site that a Mullah in the Mosque regocnised her gifts for healing and seeing the past and future.

So Naziri was born and lived her younger days on the route the Chinese pilgrims took on their way to India via Samarkand, via Termez and Balkh before visiting Bamiyan, Gandhara, Jalalabad and Taxilla. She is a strong featured and pretty women her late 40’s and once worked with Mother Teressa, in Calcutta and now runs an Ashram in Pupathi, Andhra Pradesh in India close to the guru Sai Baba. People from all over the world come to be healed by Naziri. She married Jagadesh, who was born in Agra, another great city on the Silk Route. Sai Baba arranged the marriage. Jagadesh was brought from Agra to Pupathi as a dead child by his Mother. It took her 48 hours travelling in a third class carriage on a train to reach Sai Baba, Although clinically proved dead two days earlier by doctors in Agra, Sai Baba bought Jagadesh back to life. The couple stayed in my house many times during the six years we lived in India. I modestly heard these and many stories as we chatted over Chai. These are just a few of the thousands of stories I have heard in my travels.

Nazira told me one night, “in your last life you were a Tibetan Holy Man and when I look into your past I see you in Chapan, wandering the mountainous regions of what looks like Tibet and Northern India.” She went on to tell me that I was completing unfinished work.

Do I believe this sage woman ? When you think of the millions of people who have travelled the Silk Route with storehouses of knowledge, wisdom and spiritual gifts, it is hard to disbelieve.
Posted by Bob McKerrow - Wayfarer at 02:05

Hi there just wanted to give you a quick heads up.
The text in your post seem to be running off the screen in Opera.
I'm not sure if this is a formatting issue or something to do with internet browser compatibility but I thought I'd post
to let you know. The layout look great though!
Hope you get the problem solved soon. Cheers