Rugby - what does in mean to a New Zealander ? 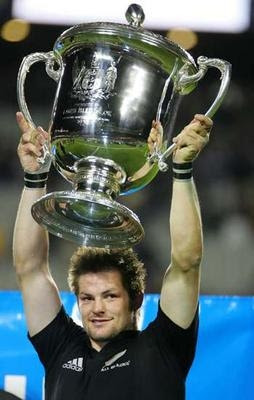 Caption: Richie McCaw holding the Tri-Nations cup aloft after New Zealand cleaned up the series against South Africa and Australia

Although my rugby playing are over long ago, never a day goes by without checking a website or newspaper about Rugby. There were 3 million people living in New Zealand when I was playing rugby as a teenager - Sunday morning church and the rest of the six and a half days rugby at school, club, street, backyard or the local park. I even slept with my first football, nestled next to be and my pillow as a 10 year old.

Then country people usually played in the forwards because they were big and strong and did real work, and the city people usually played in the backs as they were the more frail university types, or worked in offices and hardly saw the sunshine. Colin Meads was the sterotype we loved as he was a farmer and carried a sheep under one arm, four heavy fence posts under the other and a coil of fencing wire round his neck. There were exceptions, like Captain Wilson Whineray, who went to University, but played in the forwards. In a country where social mobility was possible, playing good rugby could see you shoot from a working class lad to a nation-wide super star such as my two old team mates, Keith Murdoch and Duncan Robertson who I played with at Zingari Richmond and school and later played for Otago and then the All Blacks. Good old Murdoch he was my hero. I was 17 and he must have been 23 ish. To the British media he later became a villian when he punched a security guard on an All Black tour of the UK.

I remember the day in a cold Otago winter of 1966, when we had just played at a froist covered ground against Eastern at Waikouwai-iti, in the Senior B grade (we'd both been demoted for not turning up to practices) After consuming huge quantieis of beer, Keith offered to drive me home in his Mini Minor. Imagine a 130 kg hulk of muscle getting into a small mini. I thought of covering him with olive oil and prising him in with a crow bar. He finally managed to get in the car and about 30 mins later, he didn't quite make a corner and the car slid off the road into a grassy ditch. Being an inside worker, a technician, I offered to help Keith manhandle the car back onto the road. He glared at me with disdain. "Leave it alone boy" he said, "I'll do it myself." With that said, Murdoch lifted, bounced, wrenched and slid the mini up a 3 metre side of a ditch, skewed it onto the road, straightened the car up like a city slicker straightening his tie, and wiped his hand on the back of his tight shorts.

We stopped at the Ravensborne pub for a few more jugs and Murdoch gave me a man-to-boy talk about how to play rugby. Murdoch later became a mystery man and I will tell this story later. Got to go shopping.

Shortly after I finished this, Nev Cleveland who played rugby with Duncan Robertson at High School,told mr about being neighbours to the Murdock family in Ravensbourne. Nev was the milk boy and remembers delivering 12 pints of milk to Keith's home. He told me that one Sunday morning about 7 am, he met Keith 'as pissed as a fart' crawling home with a hangover. We both recalled Keith's older brother Bruce, a bricklayer, who was also a great rugby player.
Posted by Bob McKerrow - Wayfarer at 19:59

Email ThisBlogThis!Share to TwitterShare to FacebookShare to Pinterest
Labels: born into rugby in NZ, New Zealand Rugby, rugby is religion in New Zealand, Rugby World Cup New Zealand, what does it mean to be a New Zealander?

Howdy! I know this is kinda off topic nevertheless I'd figured I'd ask.

Would you be interested in exchanging links or maybe
guest writing a blog post or vice-versa? My site addresses a lot of the same subjects as yours and I feel we could greatly benefit from
each other. If you happen to be interested feel free
to send me an e-mail. I look forward to hearing from you!

Great blog by the way!

Stop by my site ... http://leanmuscleformulablog.com

I feel this is among the so much vital information for me.
And i am glad reading your article. However wanna observation on some general things,
The site taste is wonderful, the articles is truly excellent : D.
Just right process, cheers

Can I just say what a comfort to uncover someone who truly understands what they're discussing on the net. You definitely realize how to bring an issue to light and make it important. More people have to read this and understand this side of the story. I was surprised that you're not more popular because you surely possess the gift.


Here is my blog - http://slimlipoplusdiet.com

Heya are using Wordpress for your site platform? I'm new to the blog world but I'm trying
to get started and set up my own. Do you need any coding expertise to make your own blog?

Any help would be greatly appreciated!

Hi there! This post could not be written any better!
Reading this post reminds me of my previous room mate!
He always kept chatting about this. I will forward this article to
him. Fairly certain he will have a good read. Thanks for
sharing!

Take a look at my web site bmr calculator