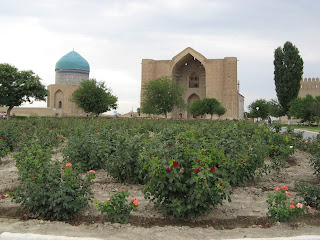 Some make pilgrimages to Mecca, Jerusalem, soldiers to battle fields where they fought. For me me this journey has been a pilgrimage to Otrar and Turkestan. The last two places for me to visit on the Silk Route in Central Asia, Pakistan and India. The last posting was on our trip to Otrar, the spiritual capital of Kazakhstan and cradle of Kazakh civilization.

After being so impressed by the Otrar civilization it was with a sense of excitement that we crept north on the true right the Syr Darya River, with a freshly butchered sheep in the back of our car It was 43.5 o C but the dry heat was quite tolerable.

I had travelled extensively along the banks of the other great Central Asian River, the Amu Darya (Oxus) in Tajikistan, Afghanistan, Uzbekistan, Turmenistan and almost reached its source in Afghanistan’s Wakhan corridor. So it was a delight to be driving alongside the Syr Darya (Jaxartes) for some time. The reason I labour on about these two rivers as some of the most notable cities on the Silk Route are situated on these two rivers,

The road from Otrar to Turkestan is quite rough and took us an hour and a half. This is an ancient land and people here use horse and carts, camels, donkeys/mules and tractor for transport. Unlike Almaty that boasts the most modern cars in the world, old Soviet Volgas and Ladas ply the route with bales of hay in their trunks or on a roof racks. This is a back-water and occasionally you see families living in Yurts. Time has stood still here. Camel and mares milk is plentiful and I never saw a Coca Cola sign for more than an hour, a modern day expression of remoteness. Suin and Erlan were quiet. We swung into Turkestan via a dusty side road and suddenly saw the impressive Turkestan University that still produces scholars of a high calibre, carrying on the learning tradition of Al-Farabi the scientist and Abbas Zhaukhari mathematician and astronomer who were born in Otrar in the 9th century.

Soon we could see the Mausoleum of Khoja Ahmed Yasavi, dominating the skyline.

This structure was commissioned in 1389 by Tamerlane to replace a smaller 12th Century mausoleum of the Sufi master, Khoja Ahmed Yasavi,(1103-66)

It was every bit of what it was cracked up to be.
In the West and in New Zealand and Australia we learn rather negatively of Tamerlane, Timur- the-lame as a bit of a Barbarian, something of a butcher, but how many have seen the works his dynasty, that brought us the history the splendour, the knowledge of the Timurid Empire ? Architecture, art, calligraphy, astronomy, mathematics, philospophy. When Oxford and Cambridge were fledging, universities they used the astronomical charts of Ulig beg, the grandson of Timur

We sat and marvelled at what was before us. But with Suin and Erlan having limited English and my Russian even more rudimentary, the architecture, the man, the satellites needed detailed answers. And then Aisulu appeared. Trained in English at the University of Turkestan, she had not only impeccable English, but a training and knowledge of this historic site and the Silk Route.

Aisulu explained how the great architect from Persia, Kwaja Hosseiin Shirazi, erected a 39 metre high rectangular building in ganch, i.e., fired bricks mixed with mortar and clay, and crowned with the largest dome ever built in Central Asia. This double dome, she said, “measures 18.2 metres diameter and 28 metres in height.”

I walked about stunned by the beauty and sense of history. She showed me the tomb of Khoja Ahmed Yasavi and told me how the dark jade tiles that cover his tomb, came from northern India. Aisulu and I soon found we had something in common. I told her I needed to see the vault where Ablai Khan was buried. She enquired as to why this was so important and I said my eldest boy is named after him as I believed Ablai Khan was one of Central Asia’s most outstanding statesmen and warrior. Taken by surprise, she said, “ So is my husband.”. She said Ablai Khan’s burial chamber is being restored and is locked. However, she quietly took me to the door and prised the chain ajar enough, so I could see the tomb. This man was Kazakhstan greatest leader. He lived from 1711 to 1781 and had the combined qualities of an astute diplomat, organiser of the liberation struggle of the Kazakh people against the oppressive Jungarian trrops and was also known as a far-sighted and wise politician, who united the three hordes in Kazakhstan into a one country. With astute diplomacy, he kept Russia from colonising Kazakhstan by having Chinese diplomats at his court.

After viewing the interior, we went outside and Aisulu explained how the other impressive Mausoleum in the complex was built for the daughter of Uligh Beg, ruler of Samarkand and probably the world’s best astronomer.

The last place to visit as the sun begin to dip in the dusty west, was to see the underground house that Khoja Ahmed Yasavi lived his final days. With such respect for the Prophet Mohammed, PBUH, Yasavi did not want to outlive the prophet. So he decided that the day before he reached the age of the Prophet’s death on earth, he would go underground and live in darkness, thereby not outliving him above ground in the sunshine. You can still see the original place he spent his last days.

We lingered by the rose garden in front of the Mausoleum as we watched a Kazakh gardener, lovingly plucking dead roses and leaves from the bushes. The symbolism hit me. From the first Mogul Emperor Babur, and throughout the Timurid and Mogul dynasties, rose gardens were an ascetic part of the landscape.

Finally, we had a sheep to give away. Erlan and Suin sought the poorest part of Turkestan city, and found a poor family. The head of the house accepted the sheep with dignity and in return gave us a large circular piece of nan.
Our final duty completed, we drove back to Shymkent nibbling on the home baked bread.

At night we dined in a replica of an ancient caravan serai, named Afriasiab, the ancient name for Samarkand, and were served by a Kazakh woman and an Uzbek man dressed in thousand year old dress. As we lay tired at the tapchan, we reflected on our journey thus far to Otrar and Turkestan. What would tomorrow bring ?