Caravan must move on. 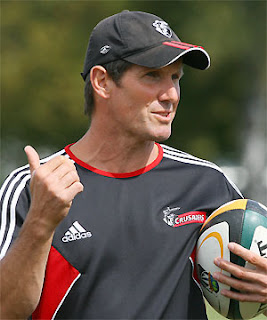 Like most New Zealanders, I was gutted by the All Black's failure in the recent Rugby World Cup final. I have expressed my views publicy that it was a leadership failure on the field. It was clear to me that the All Blacks were not used to being in a losing position, and no strong leader stepped forward in this sudden-death crisis situation. There was no Ernest Shackleton to lead and rescue the team. In the article posted below, Spiro Zavos calls for the resignation of Graham Henry to resign and for Robbie Deans (pictured above) to replace him. This is sound logic and at this point I rest my case and close on the debate for the 2007 RWC.

Caravan must move on - so must Henry
By SPIRO ZAVOS - The Dominion Post | Friday, 26 October 2007

When Alan Jones coached the Wallabies and his team was beaten he would say: "The dogs are barking but the caravan moves on." It's a useful mantra for New Zealand rugby.


First, the barking. I supported Graham Henry from the time of his appointment as All Blacks coach. So these thoughts about the 2007 RWC failure are hindsight reflections.

It is clear the reconditioning programme failed. The All Blacks were not noticeably bigger or faster than their opponents in the World Cup. Players were injured, like Jerry Collins, who rarely get injured.

I was told by someone who knew what he was saying that players complained of being tired after their reconditioning. Also, by taking them out of the Super 14 for six matches, Henry ensured that they played too few matches in 2007. Senior players were lucky if they played 12 matches this year. They were underdone for the quarterfinal against France.

The rotation policy was fine, up to the end of 2006. Henry promised it would not be put in place in 2007. But even in the tournament it was maintained. Henry should have played his main side three times in the pool rounds, as the Springboks did. J P Pietersen played every minute of the tournament. Most of the Springboks played all their matches.

This is all hindsight, of course. While journalists are expected to be prophets of the past, coaches are paid to get it right. Graham Henry did not. Jake White, probably an inferior coach, did.

Enough of the barking. Now for the caravan moving on.

Those of us who endured the last two weeks in Paris without a New Zealand or Australian side to support cannot understand the polls that show Kiwis want Henry to continue. Those grumpy All Blacks fans stranded in Paris, if my chats to them are any indication, would vote to move Henry on, say to a director of coaching job for the NZRU.

It is so obvious that the next All Blacks coach should be Robbie Deans that John O'Neill, the perceptive boss of the ARU, has been trying to get in first and snatch him away from New Zealand rugby. Players who excelled under Deans have played poorly this year for the All Blacks. Daniel Carter is a case in point. Deans has created a winning style of play. He has the knack of getting his teams up for must-win games as the Crusaders' success shows.

The best-qualified New Zealand coach, in terms of success in his coaching career, should be All Blacks coach. That was Graham Henry in 2004. It is Robbie Deans in 2008.
Posted by Bob McKerrow - Wayfarer at 20:41

I really like your approach of blogging. I bookmarked it to my bookmark website record and shall be checking back soon. Pls check out my site as properly and let me know what you think. No one of your Insta stalker will ever recognize that you are using ... a lot more data about who might view your profile, but not Instagram.