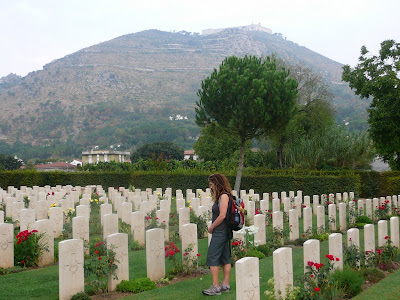 Recently my brother and his wife visited Monte Cassino and laid five roses there, one each on behalf of his five children. Private James William Godfrey McKerrow fought gallantly on Monte Cassino and saw a huge number of his friends die around him. He was wounded, but able to continue fighting. Dad spoke little of the war, but would often get nostalgic at Christmas time as he remembered the Christmas he spent in a trench on Monte cassino. He told me how there was a half day cease fire and he and his comrades crossed the frontline to celebrate Christmas with the German soldiers they had been trying to kill for the past few months. Dad said. " they were good men like our soldiers, fathers and sons like us. " He said rather sadly to me, " I wondered then and still do now, why we were fighting ? "

I have worked for the Red Cross for 35 years and have seen first hand the Vietnam War, the war that created Bangladesh, wars in Ethiopia, India/Pakistan, Nepal, Afghanistan, Sri Lanka and Tajikistan. My Dad's words turn over in my head, " Why were we fighting ? "
Posted by Bob McKerrow - Wayfarer at 18:16

Superbly written article, if only all bloggers offered the same content as you, the internet would be a far better place. Celebrity net worth is a website which reports estimates of the total assets and financial activities of celebrities. Read it for more information.