Our Gods fell to earth 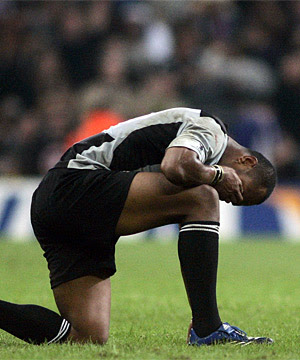 Joe Rokocoko's worst fears are realised at the World Cup.

I was stunned this morning. How did an invincible team like the All Blacks get beaten ? I have been crowing on my blog and to friends about how the All Blacks would win the rugby world cup this year.

Our Gods fell to earth in Cardiff. They are men after all.

The best rugby writer of all, David Kirk explains the hurt, the pain many of us are going through but asks us to spare a thought for the players and management.:

The All Blacks didn't play badly, but they didn't play well enough. For long periods of this test match they played better rugby than any other team in the competition is remotely possible of playing.

Their ball retention, their pace and audacity was often a joy. That they couldn't turn this into points and a comfortable victory was a testament to the sustained intensity of the French defence and their own inability to stop trying to create the perfect form of rugby and just win the match.

It is unbelievably frustrating to sit here in Cardiff and review this match.

If you look at the All Black scrum it was clearly superior to the French scrum. The lineout functioned well and the continuity play was excellent.

Kelleher played as well as I have seen him play. Carter in the first half was all class, making the right decisions, kicking well, firing out his flat passes, putting McAllister into the gap for his try.

Collins, McCaw and Soalio clearly outplayed their opposite numbers and while they had few real opportunities the outside backs did all that was asked of them.

No one played badly. If no one plays badly in a great All Black team they should win. But they didn't.

The glory of sport. The despair of not knowing what more you could have done.

It is not fair to quibble about selections after a match like this. Who knows what other players would have done in the same circumstances?

It is to my mind true to say however that the rotation policy has not worked the way the coaches and selectors would have liked.

For all the endless hours of training and honing of different combinations so they work on the field, some combinations simply work better than others. Some players simply gell in a way that means the pass sticks or the gap is found or the better decision is made.

With the margin of error so fine at World Cups it is the team management's responsibility to find those combinations and stick with them. I am old-fashioned I know, and really a long way from the intensity and nuances of professional rugby, but I think playing the best team regularly is important. It is possible to have too much talent.

The brought a simple game plan to Cardiff and a lot of heart.

They picked a fullback who could kick the ball back and a forward pack that would compete everywhere. They were particularly effective on their feet driving lineouts and mauls and in stifling the All Black midfield.

Perhaps most impressive of all was their lack of mistakes. They were under the hammer time and time again in the second half and they held their nerve. No penalties, no cheap points.

It is a shame that the match turned on refereeing decisions. Wayne Barne's decision to show McAllister a yellow card and his missing of the clear forward pass which led to France's final try determined the outcome of the match.

The players deserve better than to have refereeing decisions determine the outcome of matches.

But the All Blacks always knew they would be refereed more closely than other teams at the World Cup.

It comes from setting the pace. If you are doing things faster and better than other teams, referees will always be looking to see if there is some judgement they can make on this seemingly superior ability.

Did the All Blacks adapt effectively to the circumstances of the match? Could they have done more?

The answer is yes but there is no one area of the game, no easy, obvious lack of quality or technique to put our fingers on.

All perfectly clever in hindsight but all counting for nothing.

In my view this group of young men deserved better.

They did the work, they thought the thoughts. They were ready but when their hour came round at last it was not to be.

Many will not get a chance to play in a World Cup again. So if you think you are in pain, frustrated and sad, think about what this All Black team and management must be going through.

In the end their only failure was in their collective lack of capacity to kill a match stone dead when ahead.

No doubt this is a lot harder under modern laws than it used to be.

The answer is no for gods and yes for men.

Unfortunately in Cardiff our gods became men.
Posted by Bob McKerrow - Wayfarer at 19:30