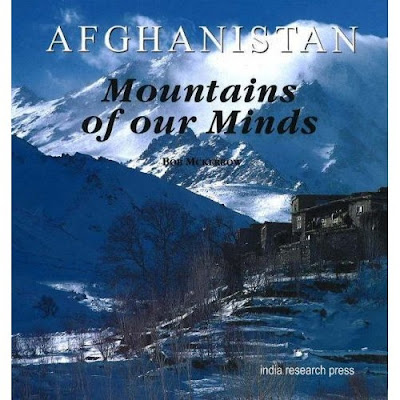 Here is a poem from my book on Afghanistan about a mountain roadman. I met this man at about 3,800 metres in the Hindu Kush mountain building a high mountain road with an old and worn shovel. It moved me greatly. Bob

His reward but a sear of flour a day
Received humbly in callused hands
As he prays, "Allah O Akbar"
His reward can't be in this land

It is published in my book, Mountains of our Mind - Afghanistan, published by tara press, New Delhi. The book can be purchased through the website www.indiaresearchpress
Posted by Bob McKerrow - Wayfarer at 18:55

I am regular reader, how are you everybody? This post posted at this web site is
truly nice.

Hey there! This is kind of off topic but I need some
advice from an established blog. Is it hard to
set up your own blog? I'm not very techincal but I can figure things out pretty quick. I'm thinking
about making my own but I'm not sure where to begin. Do you have any points or suggestions? Appreciate it

My site - check this out

You should be a part of a contest for one of the highest quality sites on the net.
I most certainly will recommend this web site!

Hello, after reading this amazing post i am also delighted to share my know-how
here with mates.

What's up, yes this post is really good and I have learned lot of things from it concerning blogging. thanks.

Hi there to every body, it's my first pay a visit of this blog; this blog includes remarkable and in fact fine material designed for visitors.

You really make it seem so easy with your presentation but I find
this matter to be really something which I think I would
never understand. It seems too complicated and extremely broad for me.
I'm looking forward for your next post, I will try to get the hang of it!

Hey There. I found your blog using msn. This is an extremely well written article.
I will make sure to bookmark it and return to read more
of your useful information. Thanks for the post.
I'll certainly comeback.

It's amazing to visit this website and reading the views of all mates concerning this post, while I am also keen of getting familiarity.

Have a look at my web site: Sac Louis Vuitton Pas Cher :: nysacpr.org ::

I would like to thank you for the efforts you have made in writing this article. I am hoping the same best work from you in the future as well. With best Pictame2, you can stalk any users and stories highlights, Anonymously Online Instagram User Posts and Highlights Story web ...

The Collection Marts is platform where you can view latest designs about home décor and bedding. We have large range in different categories with finest fabric in cotton and silk. You can view not only present trends but also view huge collection with reasonable price. bedsheets buy online , premium bed sheets , queen size fitted bed sheets , bridal bed covers , cotton duvet sets , vicky razai factory address , sofa cover sofa cover , velvet duvet cover The Collection Marts can provide fast service about delivery as well as customer support too. Our products are not only self-made but also, well connected with markets to ensure for possibility of available designs if client want to purchase. The Collection Marts customer support open 24/7 to guide their customers about material or product stuff.