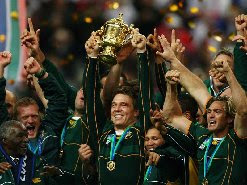 I got up just before 2 a.m. Jakarta time to watch the match. In some respects, I wish I had of stayed in bed. No tries, and an old style kicking game. Not the type of match that will have children round the world asking Santa Claus fof rugby balls instead of the latest video game or Barbie doll.

I enjoyed the closing ceremony and the presentation the most.
There were long banners in South Africa's colours and scintillating fireworks. The Springboks lifted President Mbeki up onto their shoulders where he gleefully brandished the cup aloft. And then they went skipping about Stade de France, showing off the Webb Ellis Cup while South Africans cheered in Paris and many other cities and dorps about the world.

Throughout the length and breadth of South Africa shouts resounded that were part joy and part relief because, heavens, it was close. Car horns blared, toasts were drunk, cheering and laughter broke out, revelry was on the cards - it was the biggest national party since 26 June 1995.


Congratulations South Africa. You have the William Webb Ellis trophy for four years.

I thought Victor Mafield was the most outstanding player on the field and deserved man-of-match.

I wonder what thoughts ran through All Black coach Graham Henry's head as he watched the final early moning in New Zealand. I hope he learned that rugby is about doing the basics well and moulding a group of talented players into a team, a strong, cohesive unit. Henry to my mind put too much emphasis on the sizzle of the game, and not enough on the basic ingredients.

Ah, well I think I will watch Lewis Hamilton win the world Formula One title this eveing and give rugby a break for a while.
Posted by Bob McKerrow - Wayfarer at 19:09

i am so so so so happy that i dindent watch the match it was boring!!!!!!!!!!!! you would pefer staing in be insterd of waching the match