"I and my stories are completely banned by the BBC as far as children are concerned - not one story has ever been broadcast," writes Enid Blyton.

As a young boy in remote New Zealand I was brought up on milk, rugby and Enid Blyton, and every night read Noddy and Big Ears, and later, the Famous Five or the Secret Seven. Today I discovered the BBC deprived me as a boy of Enid's great stories on air. Is this something I should be consulting my lawyers about ?

Now let's be honest, most of our life and work is about Pinky-winky-Doodle-doodle Dum-dumm and the BBC deprived us from life's preparedness ! 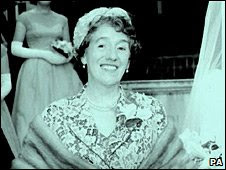 Head of the BBC schools department Jean Sutcliffe said in an internal memo dated 1938: "My impression of her (Enid Blyton left) stories is that they might do for Children's Hour but certainly not for Schools Dept, they haven't much literary value."There is rather a lot of the Pinky-winky-Doodle-doodle Dum-dumm type of name - and lots of pixies - in the original tales."

She added that they were "competently written". 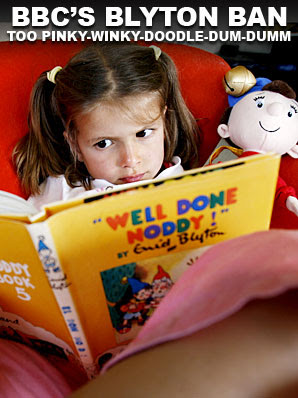 In August 1940, the BBC's radio show Children's Hour rejected her play The Monkey and the Barrel Organ, saying it was "stilted and long winded".

In 1950 programme head Derek McCulloch, known as Uncle Mac, confirmed the existence of the ban in a "strictly confidential and urgent" memo.

Ms Blyton was also clearly aware of it. In a memo to a BBC producer she wrote: "I and my stories are completely banned by the BBC as far as children are concerned - not one story has ever been broadcast, and, so it is said, not one ever will be." 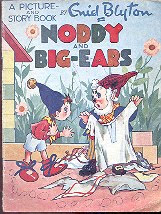 In 1954, responding to a query from the Woman's Hour editor as to whether Blyton could be interviewed, Ms Sutcliffe said she was concerned that the BBC would become "just another victim of the amazing advertising campaign which has raised this competent and tenacious second-rater to such astronomical heights of success."

The corporation eventually decided her material was fit for broadcast and she appeared on Woman's Hour in 1963.

A new drama telling the life story of the author, starring Helena Bonham Carter, is to be broadcast on BBC Four at 2100 GMT on Monday.
Posted by Bob McKerrow - Wayfarer at 03:39

Email ThisBlogThis!Share to TwitterShare to FacebookShare to Pinterest
Labels: BBC robbed me of part of my childhood, Enid Blyton, Pinky-winky-Doodle-doodle Dum-dumm

I don't know the books but lots of adult commotion here where it shouldn't be. Children read what they like to read and anything written for them what makes them read is great in my eyes.
Ka kite ano

You are right Marja, as children we read what we like and what we want. I find it bizzare that the BBC refused to use the great works of Enid Blyton because of the judgement of one woman. So the BBC had its Hitlers too ?

this is too much ! Love Enid Blyton and her books.. she is been important part of our growing up years :-)

Me too ! I loved Enid Blyton as a young boy and got so much joy out of reading them to my children.

" Make way for Noddy!" he is my best friend.

Same Bob. I grew up with her writings and loved them.

However as a more recent father of a boy now nearly 17 it was most Harry P. books although a favourite of a different type was my friend Ken's book on the hunt for moose in Fiordland. My son loved the gentleness of this story - perhaps akin to the feeling down there in Wet Jacket Arm of a soft rain!

Still the BBC did bring us the Goon Show and the Archers!

Greate pieces. Keep posting such kind of info on your blog.
Im really impressed by your blog.
Hey there, You have done a fantastic job.
I'll definitely digg it and for my part recommend to my friends. I'm sure they'll be benefited from this site.