You can judge a country by the way it looks after its most vulnerable people and on Tuesday I saw this adage in action when I was at the inauguration of a large mental hospital in Banda Aceh, Indonesia. I got back last night from a trip to Aceh and West Sumatra provinces. 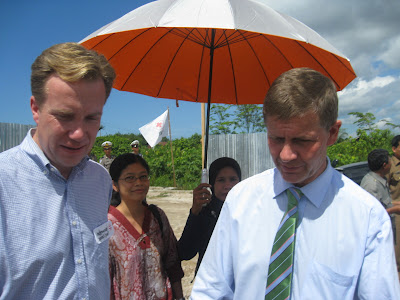 Berge Brende Secretary General Norwegian Red Cross (right above) and Erik Solheim Minister for Humanitarian Affairs and Environment, Government of Norway (left)were the guests of honour and I had the privilege of spending two days with them in Aceh and Padang, West Sumatra. The Norwegian Red Cross and its Government have given generously to the Tsunami operation in Indonesia and has done some outstanding work in supporting programmes of the Indonesian Red Cross (PMI).
What I found interesting was that Berge was the former Minister for Humanitarian Affairs and Environment, and was travelling with his successor Erik, from different parties at opposite ends of the political spectrum in Norway. They seemed close friends with a high respect for each other. 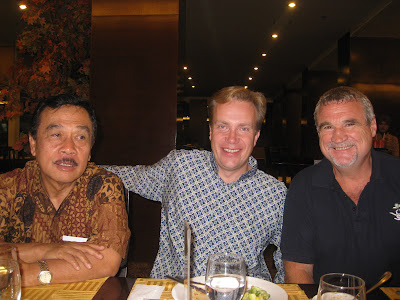 Iyang Sukandar, Berge Brende and Bob McKerrow having dinner in Aceh. Iyang and Berge were enjoyable travelling companions as you see and feel their commitment and passion for their work. They also have a great sense of fun and we were laughing a lot. 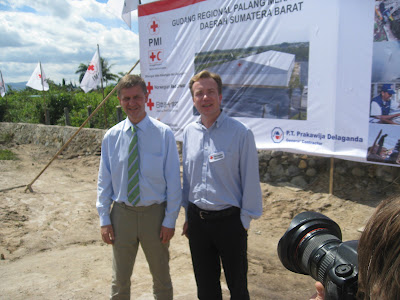 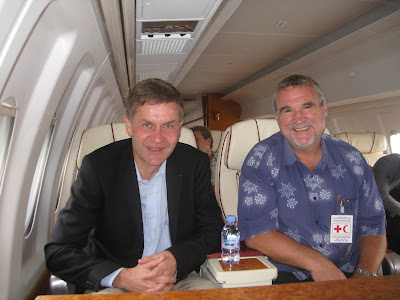 I travelled with Erik Solheim Minister for Humanitarian Affairs and Environment from Banda Aceh to Padang and he invited me and Berge to brief him on the humanitarian situation in Aceh and West Sumatra, where we are running a large earthquake relief and recovery operation.

Work this week was a real joy, travelling with two youngish leaders from Norway who hold responsible positions and could rise higher on the international political, humanitarian or environmental stages. I was impressed with their breadth and depth of knowledge and willingness to learn. Their open mindedness was refreshing amongst today's leaders.
They are following in the footsteps other great Norwegian leaders such as Fridtjof Nansen, Thorvald Stoltenberg and Dr. Monika Christensen. 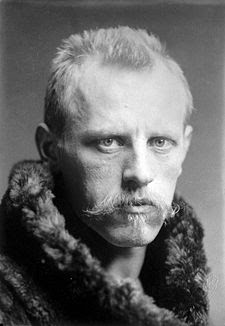 Nansen, left, (10 October 1861 – 13 May 1930) a Norwegian explorer, scientist and diplomat. Nansen was awarded the Nobel Peace Prize in 1922 for his work as a League of Nations High Commissioner, who founded the United Nations Refugee organisation,

Thorvald Stoltenberg, who I spent time with in 2007 when he came to Jakarta to look at the Norwegian Red Cross Tsunami projects, is an amazing man. His son is currently Prime Minister of Norway. 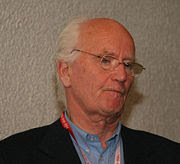 In his youth Thorvald Stoltenberg became heavily involved in the organization of Hungarian refugees fleeing the invading Soviet Army in 1956. In one particular situation, evacuating refugees by boat in the middle of the night, he jumped into the strong currents, risking his own life to save one of the boats. One of the other rescuers, future famous American journalist Barry Farber called this the greatest act of courage he has ever seen in his life. Stoltenberg himself kept the story a secret, until Farber in December 2006 revealed it on the Norwegian talk-show Først & sist. Monika Christensen is another great Norwegian leader, a glaciologist who almost reached the South Pole via the Axel Heiberg Glacier, in 1987, using Greenland huskies and a sledge. A fine leader with courage, vision and amazing knowledge of environmental issues.

Why am I going on about great leaders ? It is a subject I have written a number of articles on and would like to put a few thoughts down while I have your attention, and while the inspiration I got travelling with Erik and Berge. is still percolating.

Are you a leader or a manager ?.

As Dwight Eisenhower once said: "Leadership is the art of getting someone else to do something you want done because he wants to do it".

Having had a mixed bag of leaders and managers over the years I try to jot down my observations. So many of us work for companies or organisations that are management driven, and neither promote leadership or recognise it. With B replacing B in the US of A, we are able to compare George Bush's style with Barack's.
Chalk and Cheese and Night and Day are a bit hackneyed: Barack Obama is resuscitating a nation and a world. God, if ever we needed the kiss of life in leadership, that in the last five years has been like Friday's hot meal served up cold and stale on Monday, the time is nigh.

Distinctions between Manager and Leader:

The manager administers; the leader innovates.

The manager is a copy; the leader is an original.

The manager maintains; the leader develops.

The manager accepts reality; the leader investigates it.

The manager relies on control; the leader inspires trust.

The manager has a short-range view; the leader has a long-range perspective.

The manager asks how and when; the leader asks what and why.

The manager imitates; the leader originates.

The manager accepts the status quo; the leader challenges it.

The manager is the classic good soldier; the leader is his or her own person.

The manager does things right; the leader does the right thing.

Leadership is also about:

Not Just function but design

Not just argument but story

Not just focus but also empathy

Not just logic but empathy

Not just seriousness but also play

Not just accumulation but meaning
Posted by Bob McKerrow - Wayfarer at 06:21

Ah Norwegen I think they have a really good health and education system which is foremost important. Great country. About leadership I've been lucky to work with great leaders. What I love most about them is that they give me the freedom and responsibility (especially at the moment) to execute my own ideas and work them out

The Norwegians can be proud not only of their health and education system, but the are doing outstanding work on climate change in many parts of the world, including Indonesia.

An Original recording of a Lady GaGa Hit was Discovered this morning with no traces of where it was found.
Some say that it was discovered in GaGa's Record Label's headquarters.

Amiable brief and this fill someone in on helped me alot in my college assignement. Gratefulness you on your information.