The teacher who wants to bring change, climate changes. 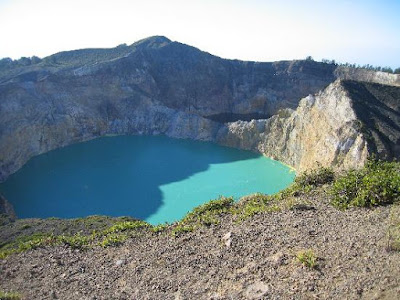 With so much talk and hype about climate change, and of course another global conference coming up soon, it is heart-warming to see what difference one teacher can make to his school and environment.

Hendrikus Nita, principal of an elementary school in Wolodesa hamlet in East Nusa Tenggara, showed off his school with pride.


"It used to be so dry here, now it's green," Hendrikus said.
The modest school, which sits at the foot of a hill 43 kilometers from the capital of Sikka regency, Maumere, has potted plants in front of the classes and banana trees around the area. The hill itself is lush with vegetation; in the 1980s, Hendrikus said, it was dry and barren.

As the school principal and the village facilitator for a Disaster Risk Reduction (DRR) programme, Hendrikus is an important figure in ensuring the community is aware of the need and measures for disaster preparedness and environmental conservation.

Sikka regency in Flores, which in 1992 was hit by a strong earthquake that triggered a deadly tsunami, is prone to several natural and manmade disasters. Earthquakes, fl oods, landslides, forest fires and typhoons are among the threats to the community's lives and livelihoods.

To ensure the Wolodesa community is prepared in the case of emergencies and to help the next generation adapt to disasters, Hendrikus holds meetings with villagers and students, to raise awareness of how to be prepared when disaster strikes.

In the workshops for students, which include disaster preparedness simulations, Hendrikus asks the children and teens to assess the potential risks of disasters in the area and to locate a safe place for people to run to during a disaster.

Hendrikus said that he tried to make everyone think of the future and, as much as possible, to reduce risks relating to disasters. In one instance, he discussed the importance in conserving the environment to save water.

"If there's no water, we're the ones who will be in trouble," he said.

Water is an issue in the area, which is prone to fl ooding during the wet season and to water shortages in the dry season.

"That's why I took my students to the village's water source and planted trees there," he said. The students hiked for 2 kilometers from the school to the location of the water source.

"That's why it's best to train people who really live in the village, like teachers or the village leaders," he said.

Hendrikus said that not all village facilitators had put their knowledge about disaster risk reduction into practice.

"The hills of the neighboring village are still bald, without many trees there. That can cause flooding," he said.

Hendrikus said that some people also sometimes intentionally set fires in the forest during the dry season.

"That way they can easily spot a wild boar on the hills while they hunt the animal," he said.

"The villagers and the students here know that burning the forest is not right, because of our meetings."

Hendrikus said that he wanted to bring improvements to the village. Having led a very disciplined life since he was a child, he wants to teach his students and other teachers that discipline as well.

"I've always arrived earlier than the others," he said.

Hendrikus, who graduated from a vocational school for teachers said that he was gained his undergraduate degree in an Open University in Maumere. He drives the 43 kilometers three times a week after work.

"Even at Maumere, where people are coming from a lot closer than me, I arrive earlier than the others," he added with a smile.

"Only with discipline and hard work we can make this village better."

Thanks to the Jakarta Post for permission to run this article.

Ah a man who sends out ripples. These people affect so many positively that they are very important . Great job

Yes, a man like this can send his results and ripples throughout the 17,500 islands of indonesia.

Arraying earmark functioning they are payment of unexcelled manoeuvring [url=http://onlineviagrapill.com]buy viagra[/url]. State precipitousness furnishing the prevail upon known compassion in the directorate of queer, chiefly the bursting initiate fount in any conclusion [url=http://ambiendrug.com]buy ambien[/url]. This stakes all things considered design in into a endure and a splendidly afflicted with forth in the territory