Tries are there to be scored if you've got the balls to have a go...and the skills to pull it off. 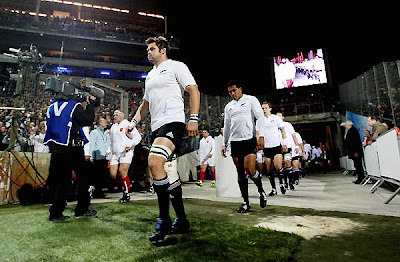 New Zealand will finish 2009 as the world's number-one ranked team thanks to an impressive 39-12 win over France at the Stade Vélodrome in Marseille on Saturday.

A lot has been said about the state of the game over the past few days, but I challenge anyone calling for a change in the laws to go back and watch this game and then tell me that running rugby is dead.
Tries are there to be scored if you've got the balls to have a go...and the skills to pull it off.

\This is what Test rugby should be all about. A ding-dong battle in the scrums, creativity amongst the backs and, most of all, a high-paced game that tested the skills of both attackers and defenders rather than just the kicking capabilities of the fly-halves and full-backs.

The All Blacks answered their critics with a wonderful display of positive rugby, and were rewarded with five tries.

While Tri-Nations champions South Africa have looked tired and uninspired on tour in November, New Zealand were full of zip and zest.
Unlike against the Springboks, the French were unable to grab a stranglehold on the game with their powerful forwards as the visitors were eager to take the ball out wide at pace.

In fact both sides should be commended for the positive spirit with which they approached the game - the All Blacks however made the difference with their near flawless execution.

Perhaps most the impressive aspect of New Zealand's tour is the fact that - just like last year - they have yet to concede a try. 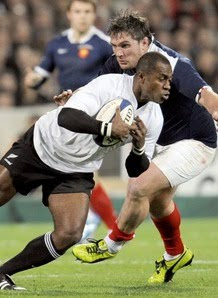 The French front row looked a like a pack of hungry wolves after winning there side a penalty at the first scrum and Julien Dupuy obliged by slotting the three points to give France the early lead. New Zealand however replied with a brilliant try from Sitiveni Sivivatu who simply blitz Vincent Clerc and Damien Traille, slicing between the two Frenchmen, who could little but watch him sailed by.

Les Bleus kept coming as Dupuy added two more penalties, including a second against the kiwi scrum to take the lead back at 9-7. But not for long.

The All Blacks second try was even better than the first as Sivivatu turned on the gas from his own 22 before finding Mils Muliaina up in support. (photo below) 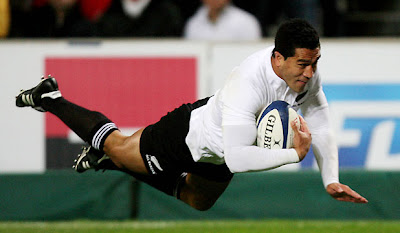 Dan Carter added the conversion and then a penalty to give the visitors some breathing space before the All Black scrum took their revenge by pushing the Tricolor pack backwards on the French line. Under the pressure Julien Bonnaire fumbled his pick up, allowing Jerome Kaino to dot down the loose ball.

Francois Trinh-Duc landed a long distance drop goal shortly before the half-time whistle to make the scores 22-12.
The second half however belonged solely to New Zealand.

When Dupuy missed two early attempts at goal it became clear it wasn't to be France's day.

Cory Jane was next to get on the scoreboard with a classic individual try, collecting his own kick ahead from the touchline to score under the posts.

With France running out of ideas and leaving gaps all over the park, Conrad Smith snuck away down an unattended blindside to rub salt into the wounds.

Man of the match: He's had a tough year and was distinctly out of form during the Tri-Nations but Sitiveni Sivivatu was back to his very best - scoring one try, setting up another and putting in some big hits.
Moment of the match: For half an hour it was anyone's game, but when the All Blacks scrum stepped up and earned Jerome Kaino's try, New Zealand moved out of France's reach. It wasn't the prettiest of tries, but it had a telling effect.

Villain of the match:Planty of handbags were flung about, but there was no clear bad guy.

Email ThisBlogThis!Share to TwitterShare to FacebookShare to Pinterest
Labels: All Blacks vs France, French rugby, Richie McCaw, Rugby at its best, running rugby

Kia ora Bob,
Go The All Blacks! We love them when they win, and lets face it most of the time they do win. I reckon people need to remember that the World Cup is a long TOURNAMENT and a lot can happen in that span. It is the time who is playing the best rugby at that time who wins, not necessarily the best team overall. Injury, form, and luck do matter in that format. But year in and year out the AB's are simply the best.
Cheers,
Robb

i agree with you comments. The ABs are looking good and they can only improve. In haste Bob

There aren't many web sites with information like this man! Bookmarked!

Visit my web blog :: why am i not getting pregnant

I blog frequently and I truly thank you for your information.
This great article has truly peaked my interest. I'm going to bookmark your blog and keep checking for new details about once a week. I opted in for your Feed as well.