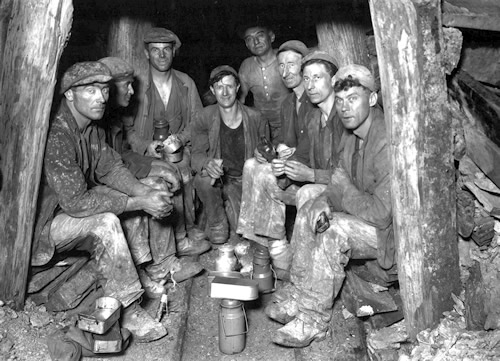 ‘Crib time’ in a mine drive in 1934, where the sandwiches were washed down with tea, pre-heated by hanging the enamel flask over a candle on one of the roof supports. How Divis managed to get to the back of the group before the shutter timer went off is a bit of a mystery. Perhaps he set everything up, then entrusted the job of tripping the shutter to somebody else.

In the early 1990's while working for the Department of Conservation in Hokitika, New Zealand, I visited the gold-mining ghost town of Waiuta a number of times. As manager of advocacy and historic resources I had an archaelogist, and two historians working for me and they were experts on Waiuta. My boss Bruce Watson also had a great love for Waiuta's colourful past, and another of my team, Ian Davidson was an actor, and when school groups or tourists visited Waiuta, he could play many of the old goldmining characters of the past. Therefore it was with great joy yesterday I received a book from the author Simon Nathan called through the eyes of a miner.

I couldn't put the book down and looked at every photo, and read every word. 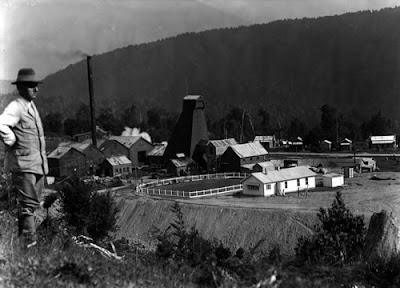 Joseph Divis in his characteristic safari suit, with the Blackwater mine poppet head and the prominent mullock (waste) heap in the centre. Its surface had been levelled to provide a bowling green. As with so many of his photographs, Divis was up before anybody else to catch the clear early morning light.


Today Waiuta is a remote West Coast ghost town, at the end of a winding road up the Blackwater River, south of Reefton. But from 1906 to 1951 it was the company town for the South Island's largest gold mine, exploiting one of the most regular and persistent gold reefs found anywhere in the world. More than 600 people lived there in its heyday, when the town had its own pub, shops, community facilities and sports clubs.

One of the locals was Joseph Divis (1885-1967), who was born near Prague (now in the Czech Republic) and migrated to New Zealand in 1909. He worked as a miner, and spent much of his adult life at Waiuta. An experienced photographer, Divis used a shutter time-release and often darted out from behind the camera to appear in his own shots. Photographs taken in the mine show him wearing working clothes, but above ground he was almost always dressed in a distinctive safari suit. His carefully composed glass negatives provide a fascinating record of the mine, the town and its people in the 1920s and 1930s. 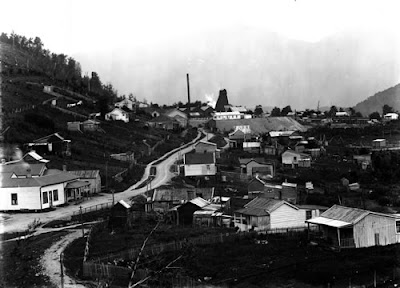 Banked-up fires in the hotel at left and the mine in the distance are about the only signs of life in this early morning photograph. Although Waiuta had been established for 20 years when this picture was taken, it still had the look of a frontier settlement constructed of wood and corrugated iron.

Simon Nathan is an old friend of mine who helped proof read my book on another West Coaster of foreign origin, Ebenezer Teichelmann. Simon Nathan has collated an album of Divis’s works in Through The Eyes Of A Miner: The Photography Of Joseph Divis (Steele Roberts, NZ$40), which also doubles as a biography of this immigrant photographer.

Arriving in New Zealand in 1909, Divis immediately headed for Blackball on the West Coast and started working in the mines there and taking photos. A couple of years later he moved to Waiutu, a once thriving mining town now abandoned. Divis recorded the places, the people, and the production equipment until he apparently suddenly ceased photographing in the mid-1930s.

Divis was not, it seems, interested in photography as a fine art. Many of his contemporaries, most notably George Chance, were in thrall to the Pictorialists and one would imagine Divis must have been aware of their work. What Divis was, was a documentary photographer, although the term wasn’t used in relation to photography/film practice until the late-1920s. He concentrated his camera on the utilitarian, the vernacular, and the every day. We see landscapes, architecture, and primarily portraiture. The images are formally constructed, with the portrait work in particular being very formal; the staid poses no doubt due to his use of the glass plate negative, even long after more practical technology existed.

Divis is an odd man of mystery. There is very little biographical information about him, as Nathan’s text makes clear, yet one of the fascinating aspects of his photography (or at least of this collection) is that he is in many of them. They are essentially self-portraits, a visual diary even, an autobiography for the semi-literate. As his photography suggests a need to record his own life I find the fact that there are no existing journals or other writings somewhat curious. I find Divis to be one of Service's 'The breed of men who don't fit in'. Somehow I found some of his photographs haunting as those lively people of the past slowly, but steadily left this thriving gold town, leaving Divis alone. He sounds at times a very lonely man, and a sad figure who had a lot of bad luck. Divis was naturalised in 1936. On his application he recorded, evidently with some satisfaction, that:

I own my own house at Waiuta, it is a four roomed wooden cottage. I am a shareholder in a gold mining enterprise on the West Coast and I am in comfortable circumstances financially.

In March 1939 Divis suffered head injuries in an accident at the Blackwater mine, and spent a considerable period in Reefton hospital. After some time convalescing in a Hanmer sanatorium, in 1940 he was interned as an enemy alien on Somes Island in Wellington Harbour. The reasons for his internment are unclear, as it is hard to see what threat he posed: he had a blameless record, was a naturalised British subject, had not been interned during the First World War, and had still not fully recovered from his head injuries. He was released in 1943 and returned to Waiuta. 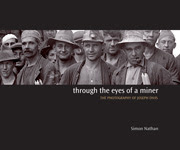 Most gripping, however, are his studies of his fellow miners. They are pictured above ground, waiting for the next shift, and below ground, creeping into crannies with their candles, to hunker down by boxes of dynamite, and enjoy a mug of tea. Through Divis, you participate in their social activities, too -- parties, school concerts, weddings, even the occasional hangi. 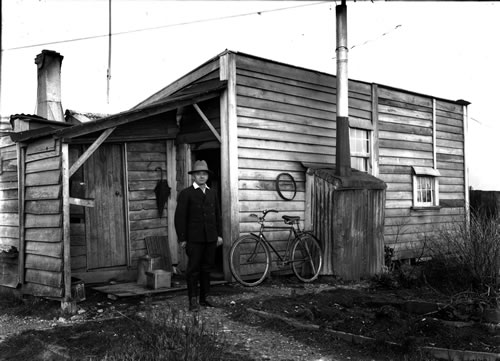 Joe Divis outside his Waiuta house

I can thoroughly recommend this book to anyone interested in West Coast history, gold mining and the way of life that was. And thanks to Simon Nathan for sending me a copy.

Thanks to a few websites that I borrowed some facts from.
Posted by Bob McKerrow - Wayfarer at 06:21

Thanks for your enthusiastic review, Bob. If any of your readers want to get a copy of the book, they can download an order form:
http://tinyurl.com/2flo8kf
P&P free in NZ
Also, you can see more about Jos Divis at this website:http://tinyurl.com/2f5n45v

Always interesting to read about NZ history and to see it preserved in pictures and a book. Mining was and is an enormous economic force on the West coast. It is not an easy way of living and there is a lot going on at the moment how new mines will impact on nature.
We spend a weekend in the Formerly Blackball Hilton. Lol they had to add the word formerly because they were sued by the Hilton in England.
They must have been a big threat.
Anyway we explored this nice town and walked along the chimneys of the old mine and drove towards a stil working one and learned heaps about mining there.
Arohanui marja

I greatly enjoyed the book and it was fun seeing these superb photos. I often wonder whether he and Teichelmann met. Tiechelmann cared for David Zimmar when he was sick and I would love to know if he every consulted Teichy ?

I noted that Divis stayed in the Zimman ward. These names keep appearing.

Pleased to learn you stayed at the Blackbvall Hilton.

Just loved your site and the photos are awesome.

Glad you dropped by. I am now in delhi examining a lot of the Moghul gardens then tolorrow off to the Himalaya. Pleased you enjoyed Joe Divi's photos.
bob

Very interesting as Bill Houghton is my grandfather.He bought his family out by boat from England. His wife May and his first three born,one being my mum she is now 86
and living in NZ.
Sharren Davis
New Zealand

Hello! Do you know if they make any plugins to protect against
hackers? I'm kinda paranoid about losing everything I've worked
hard on. Any suggestions?

This article is nicely written. A very well written guide to take care of your furnace.
https://www.lcrenovation.co.uk/house-extensions/
House Renovations in Clapham