Friends in the Himalaya 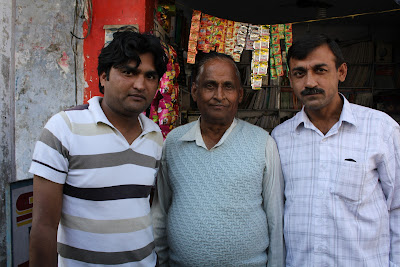 I feel I am becoming part of the fabric of the Sidhbari. The hiill people of higher Himachal, are hospitalable but it takes time to be accepted.

Sitting on a warm rock with Anuj today, our feet in an icy river draining the Himalayan glaciers, I begann to realise how my friendship with Rikhi Ram Rana and his family has grown. . When we arrived in Sidhbari, after a long trip from Delhi, the night before, we first called on Rikhi Ram. We were warmly embraced by Rikhi and his two sons Dharninder and Mitul. In the typical gesture of welcome and respect, they touched out feet, and then brought tea and snacks. Then they soaked, washed. massaged our feet in hot water 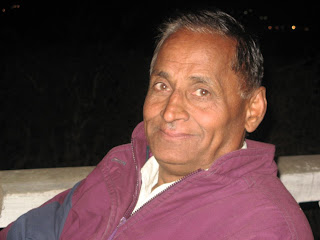 Rikhi, (left) at 78, still averages 15 kms a day, tending his 12 acre plot of land, grazing the cows and walking to see friends or on basic business matters. Last night he walked about 8 km with Dharminder across narrow dirts tracks in the dark to join us for dinner, and a tot or two of the hard stuff, before retracing his steps home. For a man who knows the mountains of Bhutan, India, Sikkim and Pakistan, accumulated during his years in the Indian Army intelligence service, Rikhi is a living legend. I feel privliged to be called my friend 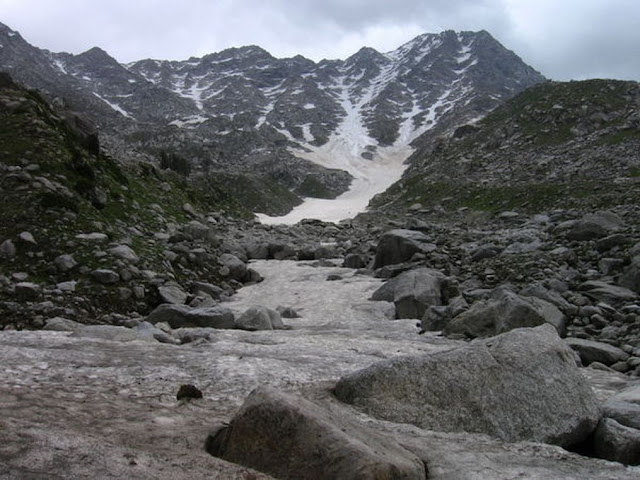 A glacier in the central Dhaular Dar one of the many places that Rikhi and I have visited. In 2008 we visited the remote Chamba and Parvati valleys. 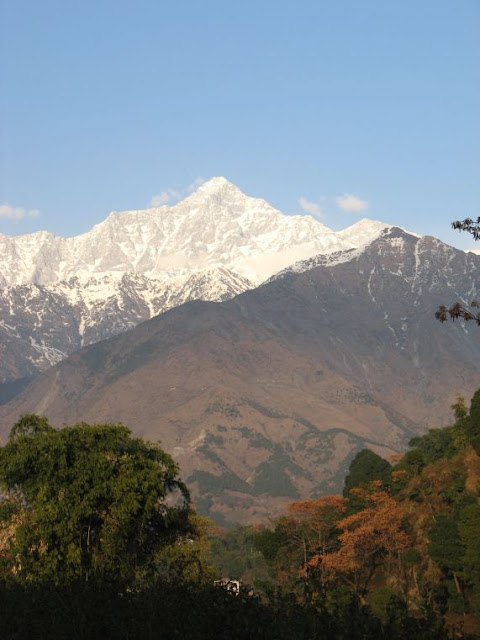 The view of the Dhaula Dar not far from Anuj's house. Photo: Bob McKerrow

Our journey commenced from Delhi on Sunday at 6.45 am and we travelled through many historic places such as Panipat, Umbella (Ambella) Chandigarh, Anandpur Shaihab, Una and Kangra. We got snarled up in heavy traffic around Una and then entering Himachal we struck deteriorating roads.   A 13 hour journey.  During the journey we crossed many of the mighty rivers from which the Punjab got its name, Punj (panch) Ab (water), meaning the five rivers. 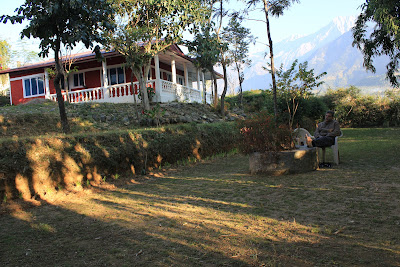 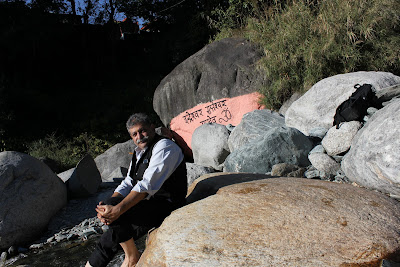 Anuj and I are close friends, and enjoy our pilgrimages into the hills and mountains every years or so. This is our sixth trip since we got to know each other in 2001, when we met in his bookshop, Bahrisons, in Khan market in Delhi. Anuj is the city slicker, businessman, successful international publisher, owner of three large bookshops in Delhi, and litrary critc. In 2000 when he felt the pressure of life in the fast lane in Delhi, he started building a house  (photo left)in one of the then remotest parts of the Himalaya, within a 15 hour drive from Delhi .He found a site in Sidhbari, nestled in the middle of a hill village in the foothills of the mighty Dhaula Dar range, an outlyer of the main Himalaya. So with friends like Rikhi and his family, and Anuj, I know this journey will be another classic.

From here over a period of almost ten years, I have used Sidhbari as a base for treks,, exploration and a traquil place for writing. With Dharamsala and Mcleodganj, the home of the Dalai Lama only30 minutes away by car and the famous Norbulinka Buddhist Institute and the Chinmaya Hindu instiute within walking distance, I have got to understand these two ancient philosophies/religions better.

As I type on the grass in from of the house, my foot is a matter of inches away from the skin that a snake has recently shed. Snow leopards, mountain goats and bears roam the hills, and birds of every description visit our garden every day.

At 78, Rikhi is so strong and its amazing he walks 15 kms a day. Real India stays in the villages...the villagers are real epitome of strength and vigour. These days I too want to go back to our SANSKRUTI....which has so great wealth of wisdom and RTE' (As described by Robert Pirsig in the art of motorcycle maintenance).

If you have more time after you complete your expedition....try to visit Patanjali Yogpeeth at Haridwar....famous for its Yog, Pranayama, Ayurveda and also for its worlds largest food park- a model for creating good business opportunities for the farmers.

I am curious to find out what blog platform
you happen to be utilizing? I'm experiencing some minor security issues with my latest site and I'd like to find something more safeguarded.

Do you have any recommendations?