She wrote: 'I was the first unmarried woman to climb in New Zealand, and in consequence I received all the hard knocks until one day when I awoke more or less famous in the mountaineering world, after which I could and did do exactly as seemed to me best.'

That was a hundred years ago today. Let's clebrate this wonderful feat.

During a 15 year period while researching and writing the book I eventually published on Ebenezer Teiuchelmann, who was a climbing contemporary of Freda du Faur, I  interviewed countless people who knew Peter and Alec Graham, and others who has heard second hand from Darby Thomson, who all climbed with Freda de Faur. I also came across many notes, snippets and photos of Freda du Faur, and my respect grew for her courage and ability. Although I have no written evidence of Dr. Teichelmann opinions of her, those who knew Teichelmann and the Graham brothers well,  believed he would have been one of the few male climbers who would have supported her whole-heartedly. They did meet twice, but more on that later.Here is one of his classic photographs of Aoraki Mount Cook taken in 1905. 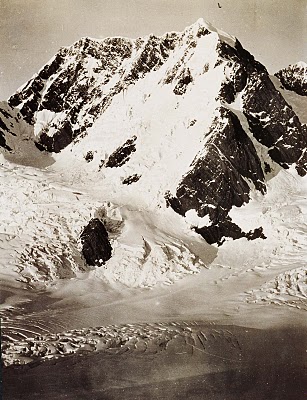 Aoraki Mount Cook taken by Ebenezer Teichelmann in 1905 from around Glacier Dome. The East ridge on the left, East Face in the centre and Zurbriggen's ridge at the immediate right of the east face.

Emmeline Freda Du Faur was born 16 September 1882 in Sydney Australia, but lived and grew up 25 kilometres north near the Ku-ring-gai Chase National Park. Much of her youth was spent exploring the diverse terrain of the park, ranging from wetlands to sand stone cliffs, a perfect introduction to the world of rock climbing. 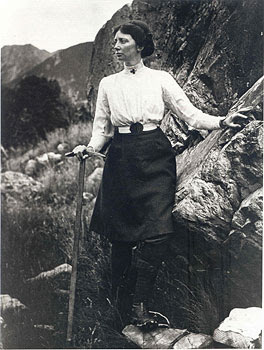 Upon completing her education at Sydney Church of England Grammar School for Girls Freda started training as a nurse. This did not work out and there is some suggestion that she was suffering from bi polar disorder.

Freda spent the next few years traveling and in 1906 made her first visit to New Zealand’s South Island to gaze upon Mount Cook. Photos of the mountains inspired her to go and see it for herself. She stayed at the Hermitage Lodge with its views of snow-covered peaks.

On her second visit to Hermitage in 1908 she met local guide Peter Graham. Under his influence and guidance she progressed from youthful rock climbing to full fledged mountain climbing. By this time she had already decided that she was going to climb all of the major peaks of the Southern Alps of the South Island.

Freda first ascended Mount Sealy within the Southern Alps on 19 December 1909. At the Hermitage, she fell afoul of other women, who insisted she should not spend a night alone with a guide, not even Peter Graham. It is unknown whether Freda was aware of her attraction to other women at this point, and how she privately responded to these concerns about morality. Unfortunately for Du Faur, the designated chaperon proved to be an encumberance. Her well-learnt ropework expertise saved his life when he slipped.

Given the rigour of the alpine environment, Freda dressed practically. She wore a skirt to just below the knee over knickerbockers and long puttees while she climbed. Du Faur wore it on all her subsequent mountaineering expeditions. She contradicted gender expectations after some of her major climbs. Her femininity disconcerted male critics and upset stereotypes about female athletes. She was a practical woman, however, and felt sunburn, dirt and discomfort were minimal discomforts when it came to the excitement of climbing.

Freda Du Faur proved to be a trendsetter in her chosen vocation, not only for similarly motivated women, but for other guided climbers of the Edwardian era. She was celebrated for her rock-climbing expertise, perseverance, and athleticism. Muriel Cadogan trained her for three months at the Dupain Institute of Physical Education in Sydney, before she travelled to New Zealand in November 1910. 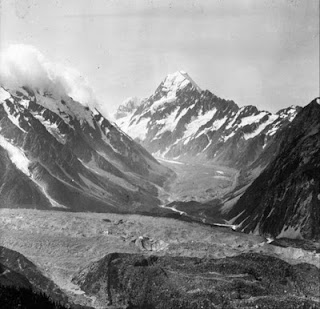 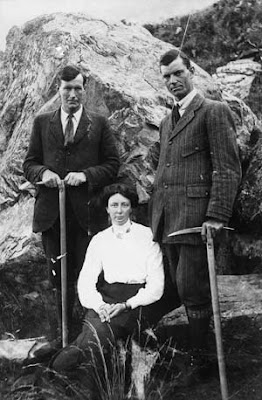 For 40 years from the mid-1890s alpine climbing was dominated by professional guides. Alec (left) was based at Franz Josef Glacier and Peter (right) became chief guide at the Hermitage in 1906. Guides like the Grahams would take clients on expeditions through the central Southern Alps. The Australian Freda Du Faur (centre) was often guided by the Grahams. Alec and Peter were with her when she became the first woman to climb Aoraki/Mt Cook in 1910. Peter also guided her on the first traverse of Aoraki/Mt Cook’s three peaks in 1913.


Freda's rigorous preparation for the coming onslaught enabled her to climb Mount Cook soon after her arrival in New Zealand. On 3 December 1910, Peter and Alexander (Alec) Graham accompanied her to the summit. Her expedition was the first female ascent of the mountain, as well as the fastest to that date. She shared her tent with the guides. After this expedition, chaperonage, dress, and convention proved to be irrelevant to her enjoyment of mountaineering.

She had great plans to climb other regions around the world including Canada, the Himalayas and the Alps. With Muriel she travelled to England in preparation, but World War 1 intervened. All her plans were set aside and Freda never climbed again.

Freda wrote her book The Conquest of Mount Cook while in London and it was published in 1915. In 1929 Muriel had a breakdown and her family came to take her home leaving Freda alone in England. Unfortunately, Muriel never reached Australia, dying at sea.
Freda returned to Sydney where she spent her time traipsing the nearby bushland. On 11 September 1935 Freda took her own life and was buried in an unmarked grave at Manly. It was not until 2006 that a proper headstone was erected commemorating her achievements.
Lendenfeld (l) Tasman (c) Mt. Cook Aoraki and dampier (l), all peaks climbed by Freda du Faur. Photo: Bob McKerrow

Earlier on in this article I spoke of my knowledge of the Freda du Faur era through my research on Ebenezer who climbed from 1897 to.1924. In her book The conquest of Mount Cook and other climbs : an account of four seasons’ mountaineering on the Southern Alps of New Zealand she refers to Dr. Teichelmann six times on pages., 21, 22, 80, 82, 137, 167 .

On page 81 she describes her first meeting with Teichelmann in 1910 at today's Franz Josef township, then Waiho. (photo left) "We strolled over to Batson's about 6.30, and there found Dr. Teichelmann, a well-known West Coast climber, and Mr. Linden, of Geelong. They had both been waiting page 81some days for a chance of crossing over Graham's Saddle to the Hermitage. They were starting the following morning under the guidance of Alex Graham for a bivouac up the Franz Josef. We decided to spend at least two days at Waiho Gorge and explore the glacier, and then, weather permitting, follow the others across Graham's Saddle."

On page 82 "The next day, Sunday, was wet, page 82and we amused ourselves as best we could; I sent most of the morning in the swimming hole. Just as we were finishing dinner there came a sound of heavy boots and weary voices in the passage. It was Dr. Teichelmann and Mr. Linden, who had been driven back from their bivouac for the third time that week by bad weather. The doctor was unfortunate enough to have a toe slightly frostbitten, so retired to his room and was not visible that night. Their account of the days spent in the bivouac so diminished our desire to do the Graham's Saddle trip that we decided to return as we had come, endeavouring to piece in the missing bits of the view, and, weather permitting, spend a few hours on the Fox Glacier."

On page 167 "We got some splendid photographs; Alex taking a special one of the great rock slabs of La Perouse for Dr. Teichelmann. I also got a beauty of the ridge between the three peaks of Mount Cook, our situation being the best possible view-point from which to study it. Then deciding that we would have to leave Mount Ruareka for another day, until it had put off its mantle of snow and ice, we made all speed for home. We managed some splendid standing glissades, the tracks of which were seen by Peter and his party, who crossed over the Ball Pass a few hours later. They concluded we had succeeded in gaining our peak."
Like the meeting of the founder of Red Cross, Henri Dunant, and Florence Nigthengale in Paris, we have very little information. As a biographer of Teichelmann,  I would love to know what they talked about when they met at least twice, , what they thought of each other, and did they have anything in common.

Let's join together and celebrate the wonderful achievement of Freda du Faur.

I just wish I could be back in New Zealand to celebrate this significant event for women's mountaineering, and mountaineering at large. What a programme is lined up at Mount Cook: The New Zealand Alpine Club, in conjunction with a small core of dedicated volunteers, is organising a day of celebration at Aoraki Mt Cook.

•Sally Irwin: "The Inconvenience of Being a Woman"
•Margaret Clark: "Women in Mountaineering in the 1960s and 70s"
•Afternoon tea
•Short topics: "Women in New Zealand Guiding", "Getting Started", "Kiwi Women on the World Stage."
•Open discussion
Tickets cost: $20.00

Kia ora Bob,
What a brave and inspirational woman, and quite a climber at that. I wonder how much all the negative stereo typing of her being a woman climber, and confused about her own sexuality in a man's world contributed to her own death? It is good to read there will be a celebration of her life and accomplishments. I am sure Lydia Bradey is aware of the doors opened by Freda long ago.
Cheers,
Robb

Freda was an inspiration to many people around the world. There has been a lot of speculation about her death, and it could be linked to many factors playing in her life. May she rest in peace.

Good on her I am always impressed that the woman in New Zealand doing very well in all areas of life.

Thanks Marja. She was an inspiration to many women in NZ, including my Mother. Bob

In my view one and all must glance at this.