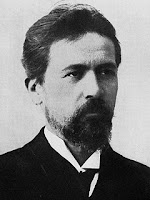 Anton Chekhov is quoted in a biography written of the famous author by his younger brother Mikhail Chekhov, the English translation of which has been just published in the United States, tells how he fell in love with a beautiful woman and made love to her under a coconut palm during a moonlit night on a brief visit to Sri Lanka.

In the book, ‘Anton Chekhov- A Brother’s Memoir’ the famous writer is quoted having said, “The island of Ceylon (Sri Lanka) , however made up for all the difficulties, he said. It was Paradise on Earth-an exotic fairy tale setting...”

In this biography the difficulties referred to are the terrible experiences Chekhov faces during a troublesome trip he made to Sachlin Island, a penal territory belonging to Russia in the Pacific Ocean. He came to Colombo during his return to Russia.

Anton Chekhov had unprecedented experiences while traveling by ship in the Indian Ocean. “In order for him to bathe, the crew would throw a line down the ship’s stern. Anton then had to dive off the bow, grab the line as it came past, and hold onto it while the ship kept moving.. As soon as he got into the water to wash off, he saw pilot fish and a shark swimming toward him (this episode made it into his story “Gusev”) . 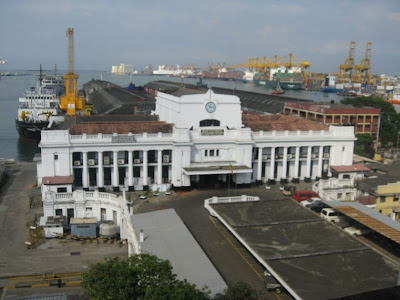 Chekhov would have stepped off his ship, cleared himself through British Immigration and Customs, and walked to the Grand Oriental Hotel across the road. Photo: Bob McKerrow

Anton Chekhoy arrived on a Russian ship, M.V.  St. Petersberg which tied up at the wharf, less than 200 metre walk from then famous Grand Oriental Hotel .how he fell in love with a beautiful woman and made love to her under a coconut palm during a moonlit night. Last week I visited the hotel and had a long talk to the General Manager about the history of the hotel. but alas, I never found the palm tree he so romantically referrred to. 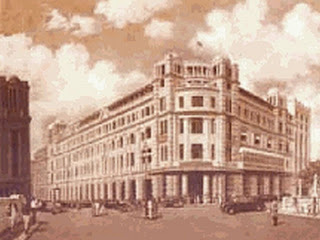 This is a photo taken of the Grand Oriental Hotel in Colombo. Sri Lanka, circa 1905.


When I went to work in Central Asia I really got to enjoy the short stories of Chekhov, each is so delicately scripted, sometimes humorous, sometimes serious, using a variety of literary techniques.

His interview with Maxim Gorrky in 1898 and 1899 helped me undestand Czarist Russia and the discontent that led to the USSR. " In Russian we have to create exceptional conditions for the village teacher..." and goes on to say that because teachers are treated so badly, and under valued, he predicted the collapse of Russia. Somewhere he observed "when the village butcher is treated like a King and the village school teacher like an outcast and put in the worst house in town, I dispair for Russia.".

Joe Lowry a good friend of mine in Budapest wrote, " The influence he had on Irish short story writing is incalculable, but I bet it was also a two-way street, and many Irish writers were writing similar stories about the magic in the banal at the same time and even before."  I'd rate him higher than Pushkin, which would cause Russians to be very angry.."..
Most friends of mine are both passionate and opinionated about Chekhov, as he had the ability to polarize the reader. 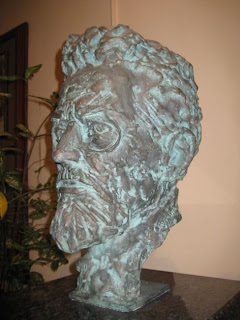 Today he is remembered as a playwright and one of the masters of the modern short story. He was the son of a grocer and the grandson of a serf who had bought his freedom, that and that his sons, 19 years earlier. Chekhov spent his early years under the shadow of his father's religious fanaticism while working long hours in his store.

Chekhov attended a school for Greek boys in his hometown from 1867-1868 and later he attended the local grammar school from 1868-1876 when his father went bankrupt and moved the family to Moscow. Chekhov, only 16 at the time, decided to remain in his hometown and supported himself by tutoring as he continued his schooling for 3 more years.

The bust of Chekhov in the foyer of the Grand Oriental Hotel: Photo: Bob Mckerrow

After he finished grammar school Chekhov enrolled in the Moscow University Medical School, where he would eventually become a doctor. Chekhov's medical and science experience is evident in much of his work as evidenced by the apathy many of his characters show towards tragic events.

While attending medical school Chekhov began to publish comic short stories and used the money to support himself and his family and by 1886 he had gained wide fame as a writer. Chekhov's works were published in various St. Petersburg papers, including Peterburskaia gazeta from 1885, and Novoe vremia from 1886. Chekhov also published 2 full-length novels during this time, one of which, "The Shooting Party," was translated into English in 1926. 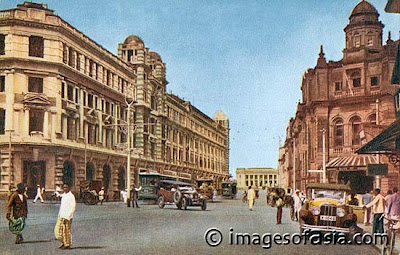 Looking down York Street looking towards the harbour the Grand Odriental, Colombo, Sri Lanka . Taken in 1910. York Street is most famous for being the address of the Grand Oriental Hotel (GOH) which was built in 1837 and converted into a hotel in 1875. One of the hotel's most famous guests was Anton Chekhov who stayed there in 1890 while still an unknown Russian author. 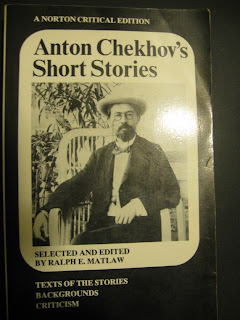 .
Chekhov graduated from medical school in 1884 and he practiced medicine until 1892. While practicing medicine in 1886 he became a regular contributor to St. Petersburg daily Novoe vremya and it was during this time that he developed his style of the dispassionate, non-judgmental author. The lack of critical social commentary in Chekhov's works netted him some detractors, but it gained him the praise of such authors as Leo Tolstoy and Nikolai Leskov.

My favourite book written by Chekhov, and I love the story he wrote about his meetings with Maxim Gorkhy. Photo: Bob McKerrow


Chekhov was awarded the Pushkin Prize in 1888. The next year he was elected a member of the Society of Lovers of Russian Literature. However after the failure of his play The Wood Demon (1889) he withdrew from literature for a while. Instead he turned back to medicine and science in his trip to the penal colony of Sakhalin, north of Siberia. While there he surveyed 10,000 convicts sentenced to life on the island as part of his doctoral research. After finished on the island he traveled all over, including to such places as South East Asia, the Indian Subcontinent, and the Middle East.. The place that took his heart was modern day Sri Lanka.

In 1901 Chekhov finally married to an actress, Olga Knipper, who had performed in his plays. But their bliss would be short lived, Chekhov died on July 15, 1904, in Badenweiler, Germany. He is buried in the cemetery of the Novodeviche Monastery in Moscow.

Though a celebrated figure by the Russian literary public at the time of his death, Chekhov remained rather unknown internationally until the years after World War I, when his works were translated into English. As a writer Chekhov was extremely fast, often producing a short story in an hour or less, overall during his career he authored several hundred stories. He didn't have as much success with his plays - the early ones were failures and it wasn't until The Seagull was revised in 1898 by Stanislavsky at the Moscow Art Theatre that he gained popularity as a playwright 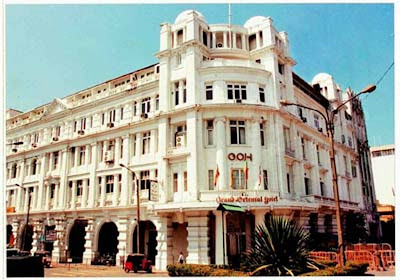 Anton Chekhov is immortalised by Sri Lankan readers as there has always been a close relationship between Russia, the  USSR, and to think that this great writer visited their country and had so many positive things about Ceylon, is testimony to the love he had for the country.

“The island of Ceylon (Sri Lanka) , however made up for all the difficulties, he said. It was Paradise on Earth-an exotic fairy tale setting...”


The Grand Oriental Today, January 2011, which is being renovated. It still has amazing grandeur, romance and a plaque on the wall and a statue in the Chekhov suite, at an affordable price.
Posted by Bob McKerrow - Wayfarer at 04:44

Thanks info 4 all. Chekhov was a remarkable short story writer and I felt a need to highlight his connections, and the influence, Sri lanka had on him.

It can't succeed in fact, that is what I think.

Great Post Bob. He was such an engaging writer and its still so fresh and distinctive 100 and something years on. Thanks for the post. Could it have been an imaginary palm tree?

Heya i am for the first time here. I came across this board and
I find It really useful & it helped me out a lot. I hope to give something back and
aid others like you helped me.

Hi! Do you know if they make any plugins to assist with SEO?
I'm trying to get my blog to rank for some targeted keywords but I'm not
seeing very good success. If you know of any please share.
Appreciate it!