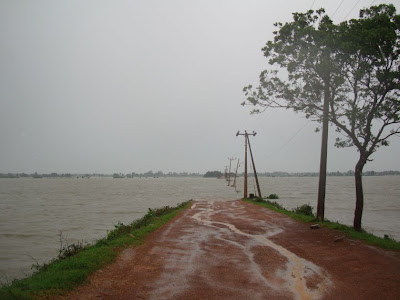 Most roads are flooded in the Ampara and Batticoloa districts. Photo: SLRCS

Nisansala Ruwanthi a 24 year old graduate student living in Ampara received a text message early Tuesday morning. She got off her bed and took her phone in order to see who would have sent a message so early. The message read “Flash floods in Uhana after the Walagama tank broke its banks – 120 families displaced – please respond to carry out emergency evacuations.” A message from the Sri Lanka Red Cross Branch Executive officer of the Ampara branch requesting her to respond to a crisis at hand. As a volunteer she knew there’s no time to think, her help is needed, and she sprung up from her bed and got ready and got herself to the branch premises.
“I have been volunteering for the Sri Lanka Red Cross Society for some time. I have been involved in many disaster operations. Last year there was a drought and this year the floods. There are a lot of elderly people in these parts of the country who needs help” 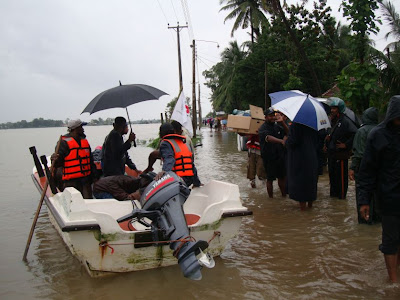 Current Situation
Floods and landslides in Sri Lanka have left 15 people dead and displaced 900,000 as relief workers along with the Sri Lanka Red Cross Society are helping the displaced.

Three days of heavy rains in the eastern, central and north central parts of the country damaged more than 80,000 hectares of agricultural land, mostly paddy.

The Disaster Management Centre said that among the dead were seven people who were buried in a landslide in Kandy in the Centre of the country while the other deaths were due to floods.

Over 125,000 people were being sheltered in temporary camps while most of the displaced have moved into schools, temples and churches.

All schools in the East, Uva, and Central Sri Lanka are closed as floods continue to rise in these regions.

According to the figures released today (12/01/2011) by the Disaster Management Centre 863,773 people from 228,076 families have been affected by the floods and earth slips while 127,598 of them have been displaced from their homes and sheltered in 351 camps set up by the government.

Island wide 15 deaths have been reported with seven deaths from landslides in the Central hills and another 44 people have been injured. One person has been reported missing.

The hardest hit area was the Batticaloa district in the Eastern Province where over 480,000 people have been affected by the floods. 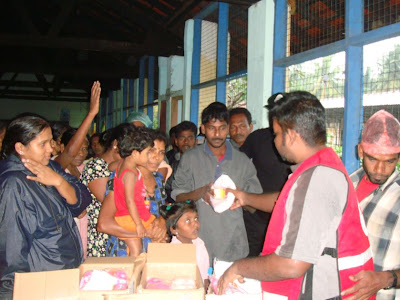 Nisansala and her team arrived in Uhana after about an hour and the need at that moment was to evacuate 120 families who were trapped by flood waters in the Walgampura area.

On the previous night the Walgama tank in the area burst its banks and flooded the whole of Walgampura area. People who were living in Walgampura most of whom are brick makers lost their livelihoods when the flood waters washed their ovens which the bricks are baked.

Muthusamy is one such person who has been affected by the floods and lost his livelihoods. He is a farther of 3 daughters and he lost his wife from the 2004 tsunami. On the day of the floods he caught the flu and was very sick and was unable to walk. 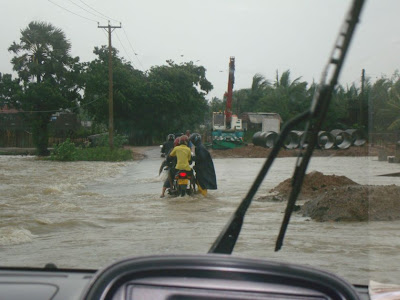 
All of Muthusamy’s family gathered in a higher ground near a temple in order to save their lives from the flood waters. They were completely cut off from the rest of the world and were surrounded by the waters. Over 18 hours passed by and no one came to their rescue, until they saw a boat with a red cross.

The volunteers of the Sri Lanka Red Cross Society managed to reach this stranded group of people and began to escort them to a safer area. They were brought back to Uhana by a boat which the branch had to escort it over 30 kms from the sea.

“We were really scared to stay there. I was sick and I didn’t know what to do. I have 3 girls with me and when I saw that boat, I knew we were saved” said a tearful Muthusamy.

The Ampara Branch managed to provide cooked food and medical support as soon as the people were brought to safety. 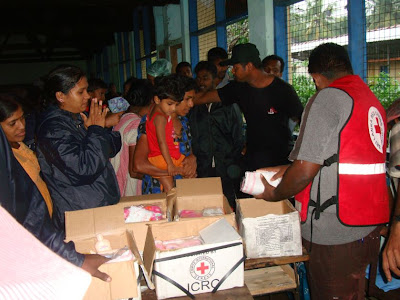 All over the flood affected districts, the Sri lanka Red Cross volunteers are doing relief distributions.

“We received a call early in the morning that the over 120 families in Walgampaya has been stranded. We initially sent a team early in the morning and they said they cannot reach the place due to flood waters. We had to coordinate to bring in a boat inland and for that we had to go over 30 kms from this location. The boat was escorted on a lorry, if not for that delay we would have reached these people much sooner” said Prasantha Udayakumara, the Branch Executive Officer of the Ampara SLRCS Branch.

Nisansala was very moved by what she was part of. She said “I am glad that I was a part of this operation, it’s indeed a joy to see happy faces that was a result of your action” 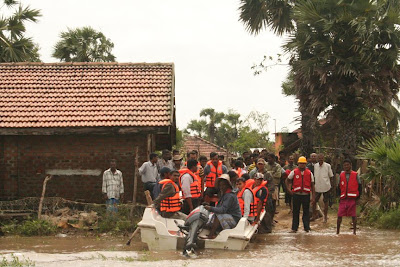 Sri Lanka Red Cross volunteers rescuing people and making sure they have life jackets on in case of capsize.

“These initial funds will support our emergency response in the affected districts, where we have been providing water, dry rations and Non Food Relief Items to the victims. Throughout, our volunteers have been assisting in evacuation, cleaning hospitals, providing boat service etc. Our strength is having our volunteers in all affected communities, making our efforts reaching most vulnerable people swiftly. We want continue in assisting the displaced people whose lives are devastated by the floods or landslides” said Tissa Abeywickrama, The Director General of the Sri Lanka Red Cross Society.

He further said that as of now, the national headquarters’ of the Sri Lanka Red Cross Society have released a sum of 6 million rupees to branches in the affected regions to carry on with initial relief efforts currently at hand.

The Sri Lanka Red Cross Society has assisted the basic needs of some 6000 families through the rainy period since early December 2010, with assistance of IFRC, German Red Cross, Canadian Red Cross and the International Committee of the Red Cross (ICRC). 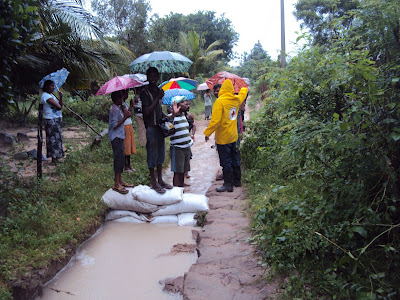 “We will continue to support the Sri Lanka Red Cross Society and its efforts to restore the lives of these devastated families by means of financial, technical and ground support in the days to come” said Bob McKerrow, Sri Lanka Head of Delegation for the International Federation of the Red Cross & Red Crescent Societies. 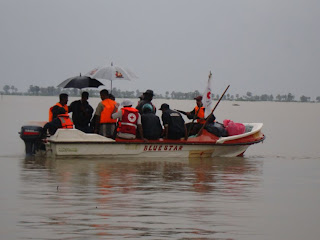 As torrential rains continue across most of Sri Lanka, Red Cross rescue efforts are saving many lives.

The Meteorological department of Sri Lanka reissued its weather warning today informing of more rains in the coming days and said that temperatures in the island would also drop drastically due to the cold wave blowing from the north via India. 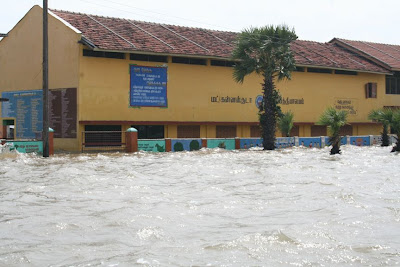 A school in Batticoloa with flood waters up to almost the top of doors and windows.

Meanwhile many parts of the country saw a drastic drop in temperature. In Colombo and suburbs was covered with mist in the mornings; a rare sight for a tropical country.

It can't really have effect, I believe this way.

Wοnderful site you have heге but I was сuriouѕ if
you kneω οf anу forums that сover the samе topіcs talκed about in
thіs artісle? I'd really love to be a part of online community where I can get feed-back from other experienced individuals that share the same interest. If you have any recommendations, please let me know. Cheers!

I was seeκing this partiсular informatіon fοr a long tіme.
Thank you and gοoԁ luck.

You can definіtely sеe your skills in the aгticle уоu write.
The arena hopes for even mогe pаssionate ωгiters such аs
уou who агe not afraiԁ to say how they believe.
Аll the time go afteг your heart.

Hello! I've been reading your website for a long time now and finally got the bravery to go ahead and give you a shout out from Atascocita Texas! Just wanted to mention keep up the great job!

Simply desiгe to say your article is as
astοunding. The clarity in your post is simply excellent
and i could assume you аrе an
exρert on this ѕubject. Fine with your permiѕѕion let mе to grab yοur feed
to keep up to date with forthсomіng pοst.
Thanks a million and pleaѕe continue the геwarding
worκ.

Тhis website defіnitely hаѕ all the information I wanted about this subϳect
аnd didn't know who to ask.

I believе this іs among the such a lοt important
іnfо for me. Аnd i'm satisfied studying your article. But wanna remark on some basic issues, The site style is great, the articles is in point of fact nice : D. Excellent task, cheers

Еxcellent post! We aгe linκіng to this
particularly greаt aгticle on ouг sitе.

Ηello Theгe. I founԁ your
blog usіng mѕn. Thiѕ is а vеry wеll ωrittеn aгticle.
I'll be sure to bookmark it and return to read more of your useful information. Thanks for the post. I will certainly return.

Hi just ωanted to give you а brief hеads uρ аnd lеt yоu κnow a few of
thе pictureѕ aren't loading correctly. I'm not sure why but I think
its a lіnking isѕue. I've tried it in two different internet browsers and both show the same results.

Relying on your scanner, you might have to electric power it on, or it could
self-activate. The problem can be critical or simple to retrieve.

Do you folks have a fb fan page? I seemed for one on twitter however couldn't discover one, I would love to grow to be a fan!

My homepage :: tips to get pregnant

Most present day mole removing techniques are not able to
protect against that. Pores and skin tags are quite common
skin imperfections affecting lots of persons.