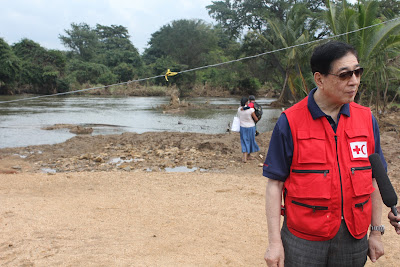 “What I saw there is huge devastation and losses. We are much concerned of the impact this floods have caused in the life of thousands of families. We have a moral contract to improve the life and restore hope for those people,” said Mr. Tadateru Konoe, President of IFRC..

Yesterday I travelled  with the IFRC President to Kilinochchi which was totally destroyed during the long 25 year war, and to the region that has been harshly affected by the floods four weeks ago. 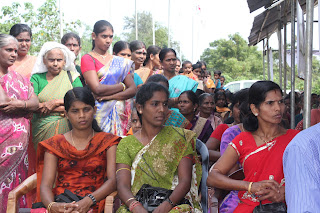 Mr. Konoé visited a village close to Kilinochchi where families have been resettled after the end of the civil war. “ I can feel your pain and dispair, and you can count on our constant support to help you overcome hardships” he stated at the occasion of a moving ceremony pictured above.. 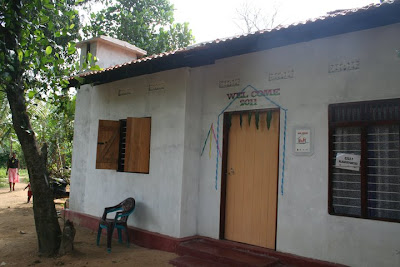 A view of the houses Red Cross have built in Kilinochchi. They are owner driven (or built by the owners and are able to add features they prefer) and each house cost approximately US$ 3200,

Along with the German Red Cross, the SLRCS and the ICRC, the IFRC runs a post-conflict recovery programme in this region to rebuild communities and to construct up to 2,000 houses with water and sanitation, access to health and livelihoods. The reason mostly women turned up to hear Mr. Konoe speak and received relief items, was that many lost their husbands and sons in the conflict.. 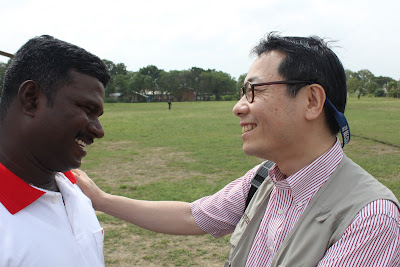 Yasuo Tanaka, adviser to the President of IFRC, hears the emotional story of a Red Cross volunteer in Kilinochchi who lived through 25 years of conflict and now counsels people still traumatised by the war. Photo: Bob McKerrow
The President of the International Federation of the Red Cross and Red Crescent Societies (IFRC), Tadateru Konoé, leader of the world largest humanitarian network, has visited Sri Lanka from 26 to 29 January.
Hosted by the Sri Lanka Red Cross Society (SLRCS), had interviews with the President of Sri Lanka, ministers as well as senior officials, the Director General and members of the SLRCS governing board as well as chairpersons from branches.
At a function honouring Sri Lanaka RC volunteers on Thursday evening Mr. Konoe said
“ II feel great satisfaction, and admiration, at seeing how committed and courageous the Sri Lanka Red Cross has been in re-organising itself, re-shaping its structure and policies with a view of increasing its efficiency to better address emergencies, to develop risk reduction programmes and, ultimately, to better serve the people in need.” says Mr. Konoé. 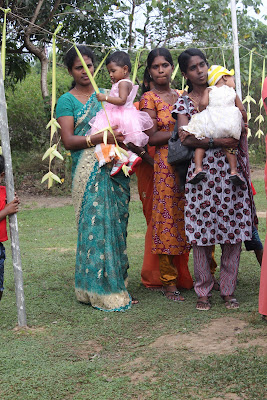 Village women dressed in their best saries, come to receive relief items for their families, including baby hygiene kits which are essential for keeping  children clean and healthy.  Many of the women who came are recepients of the first thousand houses built by the Red Cross for people who lost their houses in the 25 year long war. Photo: Bob McKerrow.
The International Federation of the Red Cross and Red Crescent Societies (IFRC) and the Sri Lanka Red Cross Society (SLRCS) have launched an appeal for 4.62 million Swiss francs (4.83 million US dollars or 3.55 million Euros) to provide continued emergency aid as well as longer-term recovery assistance to over 75,000 people over the next 12 months. 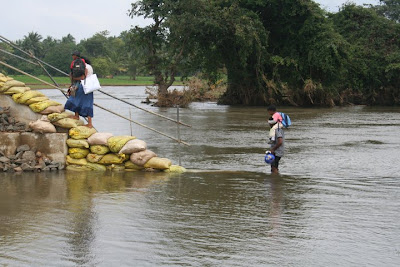 The President of the IFRC sees the hardships people are facing in Polonnawura.Just getting to their homes they have to cross flooded streams. Note the father carrying his chld on his shoulders.
“While responding to relief needs, we already have to prepare for a full recovery programme designed to better support the Sri Lanka Red Cross. In line with what has been done after the tsunami, and meet long-term needs of the people affected by the disaster,” Said Mr. Konoé.The revised appeal will focus on restoration of livelihoods, awareness raising initiatives to reduce the risk of waterborne and water related diseases; the provision of safe water; adequate sanitation and hygiene promotion for the affected families. 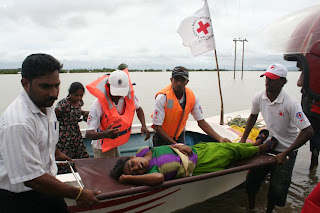 Jagath Abeysinghe, President of the Sri Lanka Red Cross Society has highlighted the importance of supporting the people affected by the floods. “We understand the plight of the people in these flood affected areas. That is why together, the Sri Lankan Red Cross and the IFRC are increasing our support to restore livelihoods as soon as possible.” 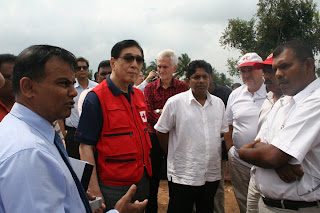 Mahesh Gunersekera, leader of the seven flood assessment teams on the far right, together with a district official on far left, explains the effects of the recent flooding on the spot in Polonawura.
DCurrent figures show that at least 43 people have lost their lives and over a million people have been affected by floods and landslides in various parts of Sri Lanka. Currently, rebuilding efforts are being carried out by volunteers and members of the Sri Lanka Red Cross Society with the support of the IFRC and partner National Societies across 24 districts of Sri Lanka. 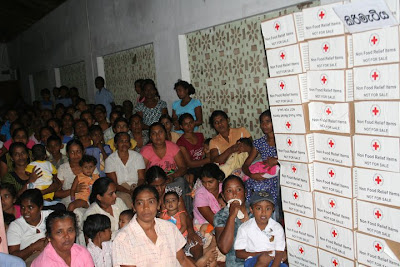 We got back from the field trip about 3.45 pm yesterday, Friday, and then had to rush off to meet the President of Sri :Lanka, Madinda Rajapaksa. It was a constructive meeting where the two presidents spoke of the importance of cash distributions to flood victims, the need to strengthen community resilience to disasters and he warmly congratulated the SLRCS and IFRC for its outstanding work in Sri Lanka. 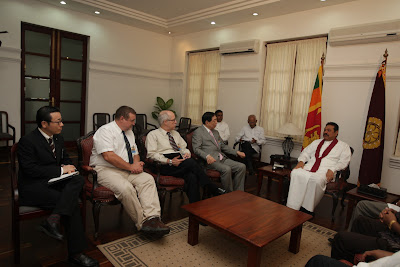 Both being concerned about wildlife, the subject of elephants and wild monkeys up and the President of Sri Lanka spoke about the importance of protecting wildlife.

It was a joy to see two men with great interest in the different spheres of politics and humanity, informally chatting about how to improve the lives of vulnerable people in Sri Lanka. 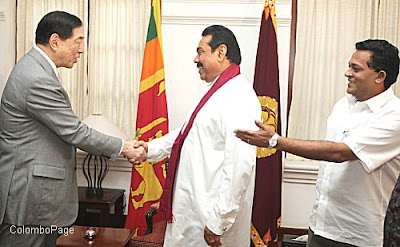 The President of the International Federation of the Red Cross and Red Crescent Societies (IFRC) Tadateru Konoe paid a courtesy call on President Mahinda Rajapaksa at Temple Trees Friday. President of the Sri Lanka Red Cross, Jagath Abeysinghe is on the right. 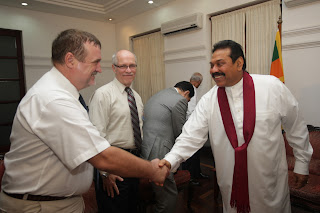 President Rajapaksa was in a very warm and friendly mood and I had the opportunity to exchange a few words and shake his hand, with Al Panico looking on. Photo: President's office.

The night was capped off with a dinner hosted by Ambassador for Japan, Mr.Takahashi and the ocassion was graced by Government ministers, the Head of UN, Ambassador of Switzerland, Head of ICRC, and President and DG of SLRCS. Ambassador Takahashi and Mr. Konoe are old friends who have worked together in the past in humanitarian operations so it was a night of celebration with excellent speeches, toasts and lively conversation. But throughout, discussion of how all seated round the table, can scale up to help the flood anf conflict victims. 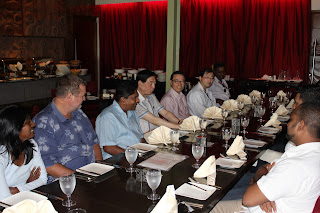 At the press conference, the President of IFRC and DG of SLRC fielded many questions. Photo. Mahieash

On this sunny Colombo Saturday at noon I was part of a press conference organised by Pierre Kremer, Head of Communications at the IFRC HQ in Geneva ,  which gave international and national media a chance to interview the President and his team.. I feel so proud to have such an outstanding President, and an old friend dating back to 1972 when we worked on the same relief operation in Bangladesh after the Indo-Pak war.
Posted by Bob McKerrow - Wayfarer at 19:42

>It was a joy to see two men with great interest in the different spheres of politics and humanity, informally chatting about how to improve the lives of vulnerable people in Sri Lanka.

Yes, this is wonderful to hear Bob. We need this to happen much more in so many countries!

I agree, we need more leaders with a commitment to humanity, sorting out the increasing needs of the world's poor and marginalised.

It amazes me that with disasters all around the world, with revolutions and riots changing the political landscape, and with poverty, hunger and social injustice rampant - all we see in the NZ press is Sonny Bill Bloody Williams.

Bob - maybe you could use SBBW in the Red Cross in some distant part of the world where the media won't go - so that the rest of us can have a break from him.

Kia ora Bob,
Agree with Donald, and Gollum. Sonny Boy has a fight with a fork lift driver who has 5 fights and lost 3 of them, and this "prizefight" and its potential implications on the world cup is all we hear about.
Cheers,
Robb

Thanks Gollum and Robb. There is too much on people like SBW and humanitarians like Tadateru Konoe and the millions of volunteers working out in difficult conditions saving lives, rarely fets a mention.

I am now in Delhi with Mr. Konoe where he is meeting leaders and volunteers from the wider region. A very inspirational man.

I am always greatfull for people like this and you. I always tell people about your work in my computer centre as we get people from all over the world, also from Sri Lanka.

Thanks very much for your comment. I have great admiration for my President as he is such a humble man and leads the way. Bob

We are a group of volunteers and opening a new scheme in our community.
Your website offered us with valuable information to work on.
You've done a formidable job and our whole community will be thankful to you.

My brother suggested I might like this blog. He was
once totally right. This post truly made my day. You
cann't imagine simply how so much time I had spent for this information! Thank you!

It's an amazing piece of writing in support of all the online visitors; they will obtain benefit from it I am sure.

Feel free to surf to my web page - solavei

It's actually a nice and useful piece of info. I am glad that you just shared this useful information with us. Please keep us up to date like this. Thanks for sharing.

I know this if off topic but I'm looking into starting my own blog and was curious what all is needed to get set up? I'm assuming having a
blog like yours would cost a pretty penny?

I'm not very web smart so I'm not 100% certain. Any recommendations or advice would be greatly appreciated. Many thanks

constantly i used to read smaller posts that as well
clear their motive, and that is also happening
with this paragraph which I am reading now.

Thanks for sharing your thoughts. I really appreciate your efforts and I am waiting for
your further post thanks once again.

With a 60 day maturity, turnips need to be in the ground by August 15.
Louis, a new delivery tradition has been created: the "Mulch Man. Grass clippings are full of nitrogen and break down quickly.

This makes the mixing phase a lot easier, just put in your concrete and water, and off you go by the wheelbarrow load.
Polished concrete floors come in different colours and types to suit the different decorative and functional requirements of
domestic or commercial customers. For faster setting concrete, use less water,
for more workability, use more water.

It's awesome in favour of me to have a web site, which is good for my knowledge. thanks admin

In order to provide quality custom research papers when client seek pre written research papers, we have hired professional custom writing services writers who can provide students with help in their business courses.