An earthquake in Sri Lanka 396 years ago today 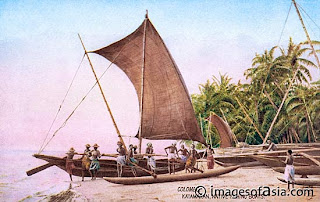 On the evening of April 14th, 1615, a strong earthquake struck Sri Lanka unleashing widespread damage and casualties in western sections of the island, most notably in Colombo. It is thought that 200 houses collapsed. A part of the western city wall of the Colombo Fort collapsed destroyed. A bastion also collapsed and destroyed a neighbouring house killing 4 persons. A stone bridge was also destroyed in the earthquake. Deep fissures opened in the earth. According to a historical text (reproduced below), flames and sulphur are said to have been emitted from these fissures. It is thought that 2000 persons were killed in and around Colombo as a result of this earthquake. If the description of the damage described in this text is to be believed, this earthquake would most likely have a maximum intensity (MMI) of VIII or perhaps even IX.

"A true relation of the Terrible Earthquake that in the past year of 1615 took place in the Isle of Ceylon in the East Indies: giving an account of the buildings that were destroyed, and the deaths of many persons, as also of the portents and signs that precede it for many days both in the heavens and on earth, with many other things on the same subject...Printed with permission at Lisbon by Jorge Rodriguez and sold in his shop, in the year 1616."

Sadly the writer does not give specific details but wraps the incident in a number of inane reflections and general statements. Reproduced herewith is text from that document, which appeared in an article in the Sri Lankan newspaper, the Sunday Observer, on 4th June 2000.

"The Isle of Ceylon is one of the best in the East, as well for the fertility of its soil as for the cinnamon it produces, which is the best that comes from those parts. It enjoyed for many years past the greatest prosperity both in health and abundance of harvest, with the result that the inhabitants became so proud that they almost forgot that those gifts were distributed by the hands of one who was able to turn to chastisement if they did not give him thanks for them.

"At last one day, which was the 7th of March 1615, soon after prayers there appeared in the air a terrible comet, which continued for many days to the great wonder of many but to the amazement of none. The comet had three tails, the end of which were like the heads of arrows, and so fiery and red that they seemed to be emitting rays of fire threatening therewith the total destruction of that Island. 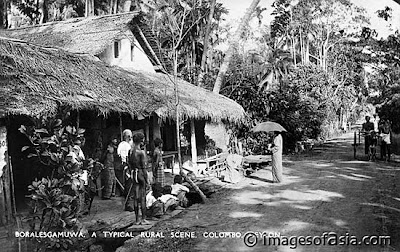 "This sign in the heavens ceased, God showed many others on land which being nearer to men might produce in them an effect which the other had not. There died animals on the fields and men in the city without any other cause of death than the infection of the atmosphere, without even time to confess their sins.


"There were thrown up from the sea numbers of dead fish, so poisonous that all who ate them died, which caused such terror to all that there was no one who ventured to the beach to give them burial: thus the putrefaction and bad odour so infected the air that not men but even the birds of the air fell dead.


"In this way the Island continued to be depopulated as some quitted it for fear and others gave themselves to the hands of death, but these signs and rigorous chastisements did not produce the amazement of those to whom they were sent. But God is a divine surgeon and as such he heals men who are sick in soul with mild remedies till, when a member is putrefied and cankered, he applies fire and the iron to amputate it, and so he acted with these folk for seeing that they were so hardened that they did not mend at sight of the signs in the heavens nor of the chastisements on land, he wished to cut them and destroy them by a terrible earthquake, which took place on the fourteenth of April in the following manner:

"On that day the sun set half an hour earlier than on other days, for it would seem that he even hastened the chastisement as if weary of the obstinacy of the inhabitants of the Island. It was seven in the evening when thunder shook the air with such force and the earth quaked so violently that, unable to remain in the houses people rushed out to the streets fearing to be buried under the falling ruins of the buildings. Then bolts of thunder fell from the heavens, whereupon the terrified people ran into the houses hoping to shelter themselves from the rigour and justice of God. The thunderbolts had their effect, destroying and laying low not only the most sumptuous edifices but also the meanest cottages levelling all, and the few that the fire had not consumed were destroyed by the earthquakes."

"Some of those who escaped declared that they heard many voices which sounded so terrible amidst the fire that when they reached the ears that they caused fear and panic in addition to that of imminent death in which they were, though the same seemed to others to be the cries of those who were perishing under the fire of heaven and the falling stones, which rolled from side to side like light feathers or as if some strong hand were moving and hurling them about. "This lasted till about morning, which dawned bright and serene, either to show that its Author had already received satisfaction for the offences of the inhabitants of that land or in order that the survivors may seem more clearly the calamities of the dead."

Fissures in the Earth "There were seen in many parts of the Island vast openings and fissures in the earth, some of which so deep that no one could find the bottom, nor were they closed up for a long time, from which there issued at certain times flames of fire as of sulphur, as terrible and awful that some people thought they were the mouths of hell and that God showed them open to engulf them if they did not reform. "The damage which this earthquake did was moreover general throughout the Island not only to fruits, trees and crops but also to cattle and other things necessary for human life. "Great grief was caused by the destruction of a large stone bridge, built at great cost and very necessary as it was the most important passage in that Island, the stones of which were afterwards found many leagues away. "They made up for it with boats and are already considering the re-erection of the bridge because of their need of it."

"There fell a good bit of the Western wall as well as the whole of the bastion, which was so strong that they thought that nothing could destroy it. "This building brought down with it a house which was near it and in which lived some of those Moors who lived in those parts in peace, killing four and there escaped only a boy of about six years of age, who was afterwards baptized for he said he was saved from death by a most beautiful lady, the same as the Christians have in their Churches, for so he called the Virgin Mary our Lady, for whom he had a great devotion."
Posted by Bob McKerrow - Wayfarer at 00:54

Email ThisBlogThis!Share to TwitterShare to FacebookShare to Pinterest
Labels: earthquake in Sri Lanka 396 years ago, earthquakes in Sri Lanka

I will be your frequent visitor, that's for sure. pain relief Read a useful article about tramadol tramadol

I would like to more know about it. asthma Read a useful article about tramadol tramadol

You have quite a good range of color choices for coastal houses, actually. You just need to check what you want, open your mind to the possibilities, and apply some creativity. It can stretch from the traditional to the ultra-modern hues.