The Passion in Port Talbot Wales, led by Michael Sheen 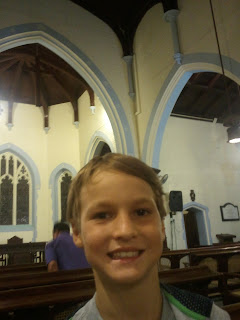 Last night I went to the Scottish Kirk in Colombo with my boy Mahdi (photo right) to the Good Friday service. Having read, heard and seen plays on the story of the trial, suffering and death of Jesus Christ many times before, I could not help be moved by hymns and the sermon given by the Minister the Rev. John Purves. But to think that a whole city in Wales, and leading actor Michael Sheen are putting on such a creative re-working of biblical passion plays, is quite remarkable. But then, think what other great actors came from Port Talbot? Richard Burton and Anthony Hopkins. Why has this sea-side city got so much talent ? 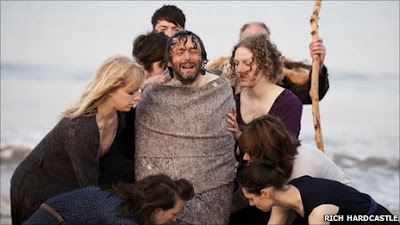 Michael Sheen in one of the opening scenes of the weekend-long Passion, which started at Aberavon beach on Friday. An open-air play with a cast of more than 1,000 and a Hollywood star in a leading role is taking to the streets of Port Talbot, Wales,  for the next three days.

The Passion, a re-working of biblical passion plays, stars Michael Sheen, who has returned to his home town to direct the National Theatre Wales project.

It is not just set in the south Wales town, it also involves hundreds of its residents as well as numerous groups.

The production started on Good Friday at Aberavon seafront and ends on Monday.

Hundreds watched from the promenade and the beach as the first elements in the drama unfolded.

Organisers say it will run for 72-hours non-stop, with a series of public performances on each of the three days.

Passion plays developed to tell the story of the trial suffering and death of Jesus Christ. 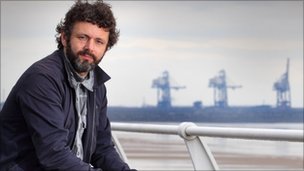 Sheen pictured left, said it was a "privilege and honour" to work in his home town of Port Talbot


Sheen, known for his portrayals of public figures such as Tony Blair and David Frost, has said he was inspired by the community spirit of the passion plays he watched at Margam Park as a youngster.

In addition to co-directing The Passion, Sheen is also starring in the production, which has a core cast of 15 professionals who are from the town.

He said rehearsals with Sheen included jogging on the beach and two hours' exercise to ensure the cast had the stamina for the three-day production.

He said: "It has been brilliant fun. In my 20 years' as an actor this is the best job ever.

"It's been a brilliant opportunity to work with him. But because he's so down to earth, it's not been that strange. You have got used to his genius in the room."

He added: "The hardest part is coming back and staying with your mum all the time. We've all turned back into teenagers - nobody's been allowed out too late and everyone's clothes are nice and clean." 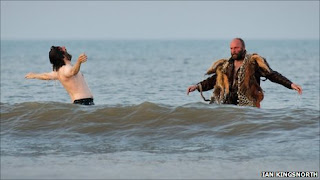 Sheen's character of a teacher is 'baptised' by a stranger, played by Nigel Barrett, as the sun rises over Port Talbot


But the bulk of the cast is made up of volunteers from Port Talbot itself, including choirs and youth theatres as well as voluntary groups.

More than 1,000 are set to take part in performances being held at locations including the seafront, Aberafan Shopping Centre, Seaside Social Club and the civic square.

The production, written by poet and novelist Owen Sheers, is the last and largest of a series of National Theatre Wales "moving productions" to promote its first year programme.

Artistic director John McGrath said: "About two years ago we asked Michael to be part of our launch year and he immediately came up with the idea reinventing the passion play in Port Talbot.

"It was one of his earliest theatrical memories.

"When he steps in to the role, the whole thing lights up because he has this extraordinary presence."


(NOTE: all day events start at the shopping centre)


THE PROCESSION From Station Road 1700

Special thanks to the BBC for permission to use some text and photos.
Posted by Bob McKerrow - Wayfarer at 03:46

Pretty effective material, much thanks for your article.

This is really interesting, You're a very skilled blogger. I have joined your feed and look forward to seeking more of your wonderful post. Also, I have shared your website in my social networks!

Also visit my web-site :: how much should you weigh