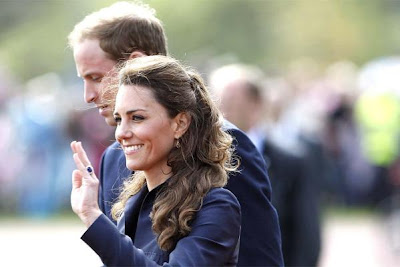 As the big day approaches final preparations are underway to ensure the smooth running of the royal wedding.

We are all so excited as the what the Royal Wedding will be like? Click on clip below to get a preview from the rehearsal.

The royal household is keen to emphasise that William and Kate have been the driving force behind the planning of the details of the ceremony.
But are the young couple really getting it all their own way, particularly with the guest list?  Read on!
As I great fan of Royal Weddings, this is a foretaste of what to expect. Click on this video below:

Apparently we have a problem back here in NZ as my cousin Deirdre just pointed out:

"What on earth am I going to watch on TV on Friday night? The Highlanders v the Blues, the Breakers, or the Royal wedding?".

Will reply to your email soon :)

i would think the priority would be watching the Highlanders, the Breakers, the wedding at half time, and the Blues merit a replay later.

This Royal Wedding of the 21st Century is a blessing in disguise in these all important ways. It comes at a time when the world is reeling from much pain and suffering - not a recipe for bringing optimism and sustainable smiles on faces of people. What is there to lift spirits when media of all sorts bombard our eyes and minds 24/7 with devastating images of every kind imaginable,natural and manmade (earthquakes worldwide, tsunamis, nuclear disasters, greed and lies everywhere and tyrants wantonly slaughtering their people whose only desire is for a better way of life) and on top of all this a global recession, mountains of debt at both the micro and macro levels. Tell me can these things bring on happy faces? Positive images and pursuits can, and that's what the world needs now.

Prince William, son of our dearly beloved Princess Diana in his wise judgment, no doubt, realized that his decision to get marry now and not later down the road could be the ace to help an economy in the doldrums and possibly bring joy and smiles once more on faces warped by so much sackcloth and ashes, for crying out loud. By golly, Prince William was right, people are happy and smiling worldwide. The euphoria for Princess Diana, the most beautiful, loving and down-to-earth member of the British Royal tree is back through Prince William her first son. This Royal wedding has brought back not only smiles on faces and media rejoice as well if you know what I mean. It is as though Princess Diana is speaking to the world from the grave through her most beloved and adorable sons, Prince William and Prince Harry. This Royal Wedding is a breath of fresh air for the sagging economy worldwide (the potential for jobs as a result; I don't have to tell you as if you don't know already). I can't wait to cozy up to my TV and watch the pomp and pageantry the hallmark of the Brits where an authentic British Monarchy rules, and I make no apology for saying that. Long live the British Monarchy, God bless the Queen and all her household. Congratulations to Prince William and Kate Middleton on this their Wedding Day and I wish them a happy and long married life. The next big celebration I wish for in the very near future is the coronation of Princess Diana's son, Prince William as King of England and the Commonwealth. I meant no disrespect to Her Royal Highness, Queen Elizabeth II, but Prince William has the characteristics for giving the British Monarchy its "new clothes" in this 21st Century. King George VI did just that supposedly at a time when threads in the British Monarchy began to fray, in my humble opinion. A new King of England and the Commonwealth sounds good to my ears.

Cheers
Shall be back soon

Good morning Paterika, I have just got back from an early morning round the lake, saw all the migratory birds, resting after long flights, and stopped at the temple, to watch the temple elephant having breakfast.

The Royal wedding is a breath of fresh air and is putting smiles back on people's faces. I agree, William is carrying on the great work and freshness his Mother brought into the Royal family. Kate is charming, wise and strong.

I'll be switching from rugby, to cricket and basketball as I watch the wedding. Enjoy the spectacle. I watched Chris Gayle last night. What a great player.

Hilarious video Couldn't stop laughing. Thanks needed that.
Kate will look great on friday as she is a very beautiful woman

Dear Marja, Yes kate will be stunning tomorrow. A real Fairytale Princess, and a charming Prince.

I am pleased you enjoyed the video.