Abbottabad, a place where Osama bin Laden was killed

I met Osama bin Laden in early 1996 in Laghman province in Afghanistan.

This tall, and quite handsome man seemed a serious and likeable man. As is the Afghan tradition, when a foreigner is in an area, he called me over to his table in a small, dirty tea shop to join him and his group for tea. He asked me what I had been doing and I told him that I had been into the mountains of Nuristan with my Afghan Red Crescent colleagues where we were building a clinic, two days walk from the road. I said women die in child birth because they don't even have basic facilities and now we have a trained doctor and nurse who run the recently-opened clinic.. He congratulated us. I didn't know much about this man, but he left an impression on me. Little was I to know his future doings.

But some years later I got to know more about this man.

I've just come back from a walk past soft yellow corn fields with the the Jura mountains as a backdrop and Mont Blanc on the other side of the path.

I'm hurting today because it seems Ahmed Shah Massoud is either dead or dying. Some say it could be the work of Osama bin Laden. I think of the times I met Massoud during my stay in Afghanistan between 93 and 96, and the hour interview I had with him before I left in August 1996. My friend Azem was killed too and Massood Khalili badly injured, the Ambassador to India and son of the great Afghan poet. 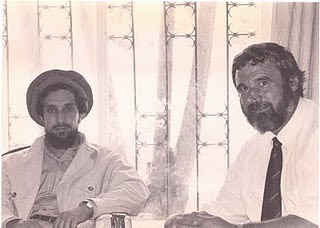 Meeting with Ahmed Shah Massoud in Kabul, in 1996.

My heart bleeds for you Afghanistan; the pain and hurt you've been through. Penalised by your geographic location and the pawn of superpowers.

During the day in the workshop in Ferney-Voltaire. my mind kept going back to Ahmed Shah Massoud and his senseless killing by hired killers posing as cameramen. Just before 4 pm, we broke for afternoon tea. As I picked up a cup of tea, the ,manager came running and shouting in French, something about a disaster in America. A group formed at the TV in the bar and watched an interviewer talking about a plane hitting the World Trade Tower, then seconds later we saw the most spine-chilling metal and human bomb plough into the second tower.

In my diary that night I wrote in capitals A DAY WHICH MAY CHANGE THE FACE OF THE EARTH AND THE NATURE OF TERRORISM. 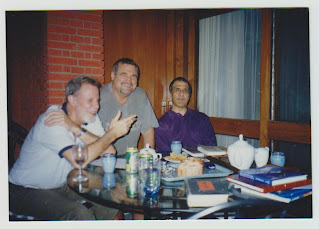 Right: Massood Khalili on the right, G.Whitney Azoy on the left and I in the centre, on the veranda in my house in New Delhi in early 2002, when Ambassador Khalili was recovering from the Al Qaeda attack that killed Ahmed Shah Massoud and left him badly injured.

Whitney is the author of that famous book 'Buzkashi - Game and Power in Afghanistan.'

I wrote on the day before b9/11, "Massoud gone, many thousands of lives lost in the four plane hijacks......"

The scenarios began to build up in my mind; retaliations on Afghanistan yet again. Alexander the Great, The Arabs, The Turks, Chengis Khan, Timur, Persians, The British x 3, Soviet Union and now a US led western coalition.  FINISH QUOTE FROM MY DIARY ON 9/11

Today Osama bin Laden was killed in Abbottabad, which I recall after many visits to this beautiful town beween 1994 and 2006, as a peaceful place. I visited there in May 2006 to run a disaster preparedness workshop with Irja Sandberg and Ilyas Khan, and then when the tragic earthquake struck in this region in October 2005, Abbottabad was badly affected. but the worse damage was to the north. I spent over a month in this region after the earthquak in 2005 which killed over 75,000 people. 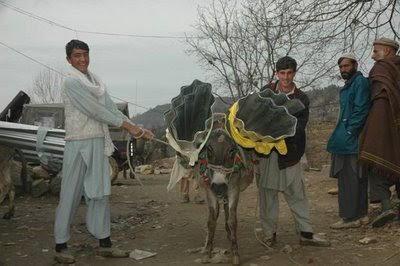 Villagers carry relief supplies during the 2005 earthquake near Abbottabad:

Abbottabad is home to at least one regiment of the Pakistani army, is dotted with military buildings and home to thousands of army personnel and many Universities and institutes. Surrounded by hills and with mountains in the distance, it is less than half a day's drive from the border region with Afghanistan. 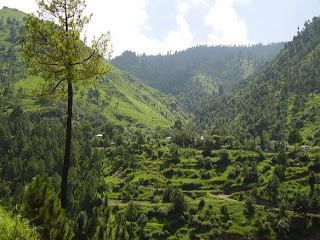 On the outskirts of Abbottabad, en route to the high Karakoram ranges

Where did the name Abbottabad come from?

Although, Abbottabad today is a thriving business and tourism city, it is traditionally a military city. Besides the prestigious Pakistan Military Academy (PMA) in a nearby village of Kakul, Abbottabad is home to three regimental centres of Pakistan Army and Army School of Music. The PMA provided fame to Abbottabad for many years, prior to the recent development of the city, from a non-industrial backward area, to a busy modern business, economic and academic centre. The city takes it roots from the British India, when Major James Abbott came this way in 1853 after the annexation of Punjab into the British dominion and laid the foundation of a military cantonment. He also became the first Deputy Commissioner of Hazara Division. By 1901 the population of the town and cantonment had grown to around 7,764, which today stands at 300,000. Abbottabad remained the dominating district till 1976, when one of its tehsils Mansehra was given the status of district, which now consist of Mansehra and Batagram Tehsils. Subsequently in July 1991, Haripur Tehsil was separated from Abbottabad and made district. Thus only the Tehsil Abbottabad remained, which was declared as district. Major Abbott was so mesmerized by the beauty of the area that when leaving Abbottabad with a nostalgia a, he wrote a poem expressing his love and affection for the place he founded.

What a quirk of fate.

If you want to read a more complete story on my meeting with Osama bin Laden check this link: http://bobmckerrow.blogspot.com/2008/05/late-morning-tea-with-osama-bin-laden.html 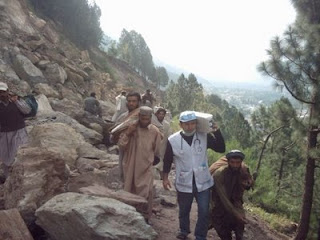 Pakistan Red Crescent medical team walking into remote earthquake villages  carrying medical supplies to treat people affected by the earthquake in October 2005, which killed over 75,000. This photo is taken in the hills north of Abbottabad.

Bob, you are a fantastic writer. Then again, we already knew that! Nina

Nina Hjelmgren. how I have missed you over the years for you are one of the few, who understands Afghanistan in the global contect. The killing of Massoud was the biggest mistake Al Qaeda made, and it will haunt and inhibit them for their life span.

Who would have picked Abbottabad, that beautiful village in the shadow of the Karakoram.

Send me an email for it will be great to catch up with your news.

Warm regards, and enormous respect for a great writer on Afghanistan.