Our last day canoeing on various lakes in the Boundary Waters north of Ely Minnesota was magnificent, and it drew to a close nine days of the 1986 North Pole expedition reunion which included getting together informally and canoeing and partying, four days of which were public exhibitions, displays and lectures. 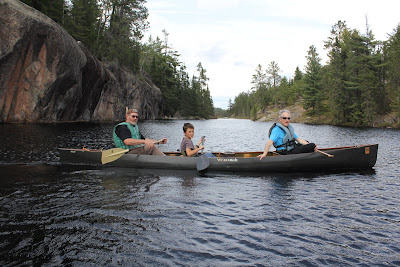 L to R: Geof Carroll, Ablai McKerrow and Jeff Blumenfeld on the lake where we found pictographs. Photo: Bob McKerrow

In the morning we headed into Ely to pick a second canoe and this turned into a trip down memory lane as we went to Jim Brandenberg's studio white wolf, Patty Steger's mukluk store,  and to Jason Zabokrtsky who owns Boundary Waters Guide service and The Ely Outfitting Company. We also egged Geoff on to buy a pair of men's underwear with a rather provocative slogan on them.  I am sure Maria, his lovely Innuit wife be in for a surprise when he returns to Point Barrow Alaska. 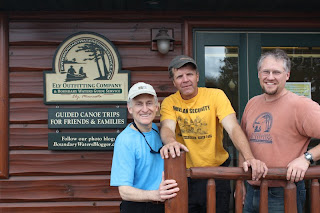 On the town with Jeff Blumenfeld, Paul Schurke, talking to  Jason Zabokrtsky, the leading outfitter in Ely. Photo: Bob McKerrow

Paul Schurke knows all the lakes, rivers, camping sites and places of historical and spiritual interest. On Friday he took us to one lake north of Ely, where we paddled to an amazing campsite with a spectacular view over the lake. There he told us of the political history of the region. In 1926, the Superior Roadless Area was designated by the U.S. Forest Service, offering some protection from mining, logging, and hydroelectric projects, although logging would not cease completely until 1979. The Wilderness Act of 1964 made the BWCAW legal wilderness as a unit of the National Wilderness Preservation System, while the 1978 Boundary Waters Canoe Area Wilderness Act established the Boundary Waters regulations much as they are today with motors allowed only on a few large entry point lakes.


Because this area was set aside to preserve its primitive character and made a part of the National Wilderness Preservation System, it allows visitors to canoe, portage and camp in the spirit of the French Voyageurs of 200 years ago. 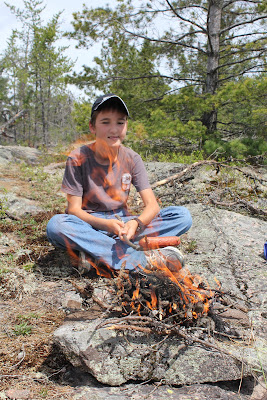 Left: Here Geoff, Jeff and Paul showed their skills by making a fire ready on a large flat rock they had placed on the ground, and gave Ablai the honour by lighting it.

Within the BWCAW are hundreds of prehistoric pictographs and petroglyphs on rock ledges and cliffs. The BWCAW is part of the historic homeland of the Ojibwe people, who traveled the waterways in canoes made of birch bark. Prior to Ojibwe settlement, the area was sparsely populated by the Sioux who dispersed westward following the arrival of the Ojibwe.

French explorers were first known to travel through the Boundary Waters area in the late 1600s. Later, during the 1730s, the region was opened to trade, mainly in beaver pelts. By the end of the 18th century, the fur trade had been organized into groups of canoe-paddling Voyageurs working for the competing North West and Hudson’s Bay Companies, with a North West Company fort located at Grand Portage on Lake Superior. The US-Canadian border, the northern border of most of the BWCAW follows one of the primary voyageur route 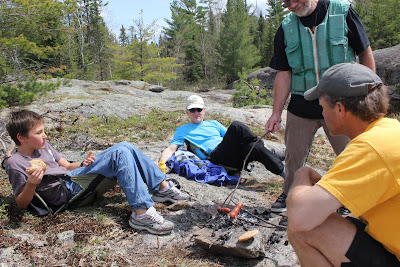 Ablai, Jeff Blumenfeld, Geoff Carroll and Paul Schurke reflect on life around the fire, as they cook lunch. Photo: Bob McKerrow
We canoed from our lunch site down to the end of the lake, and portaged our canoes onto Hegman Lake, I was paddling in the front of our canoe, and Paul, said, " Bob, paddle over to those rock walls to the side of the lake." As we got closer, I spied some paintings of the rock wall. I was entranced. 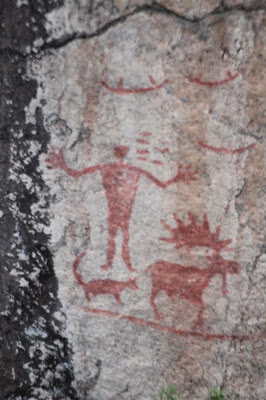 We were all stunned by the pictographs, the spirituality it generated, the sense of history and for me, trying to sense who these people were and how they lived. Paul, with over 40 years of local knowledge told us the history of an Indian chief who lived in the south, whose tribe was starving. He had a dream of a land with plenty of lakes full of fish, and forests where many types of animals lived. Like Mosses, he led his tribe to this part of the land. 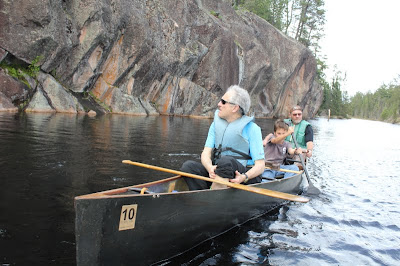 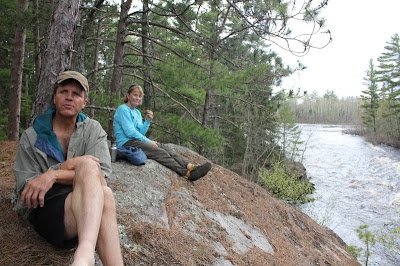 Paul (l) and Sue Schurke (r) sitting on a rocky promontory near White Iron Lake where they have their home, dogsledding lodge and 70 plus Greenland huskies. I first met Sue and Paul when they visited me at Anakiwa in NZ in 1983 and did two arctic expedition with Paul in 85 and 86. They opened their marvellous home and Wintergreen Dogsled Lodge to us and provided wonderful hospitality and nmemorable canoe trips.
The last night at Paul and Sue Schurke's home on the Boundary waters, was a memorable one where the remnants of our North Pole Expedition, together with Jeff Blumenfeld and Ablai, had the last supper for a while. The sunset from the balcony farwelled us. 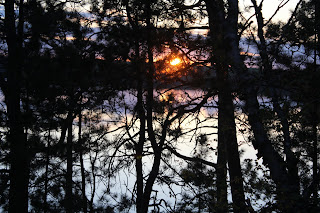 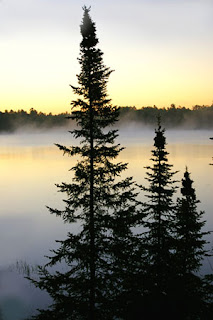 I left Minnesota yesterday with such feelings of camaraderie and amazed by the individual acheivements since our expedition in 1986, and with many new friends.  This group of eight explorers have neen to the North Pole over 30 times, to the South Pole four, and numerous trips to Greenland, Arctic Canada, he Russian Arctic and Himalayas. In their own way, and own time, they have become advocates for climate change, vulnerable peoples, promoting peace between nations and  in the words of Ann Bancroft "I believe that in honoring our women leaders, and by supporting a girl's ambition and hope, we are validating ourselves. "  Others are doing important wildlife biology and conservation in the Arctic regions, but above all, they are curious explorers of the remote regions of the world and preserving them.

Special thanks to Bill and Duffy Sauer, their daughter Lisa, for taking charge of airport pick-ups and accomodation.
To Will Steger's sisters and Ann Bancroft's family who were so kind and helpful, and to the Mother of them all, Lois Schurke at 90 years of age, who gave us laughter and inspiration. With deep appreciation to Gail & Marlin Olson for putting up Brent, to Bob & Lana Doolan for looking after Bob Mantell, and Wendy & Seth Webster for accomodating Geoff and Quinn. Thanks to Greg and the team at Wilderness Inquiry for the canoe trip down the Mississippi ad the BBQ.

And of course, to all the Minnesotans that backed our 1986 North Pole Expedition, and who are still backing us now, such as Tom, who gave us all a ride from Ely to St. Paul/Minneapolis airport. Thanks to you all. 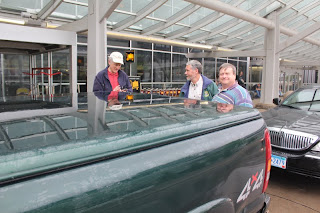 Tom (far right) and his amazing  twin cab pick up that took took five of us, and our gear to the airport. Thanks Tom. Thank you Minnesota. ! 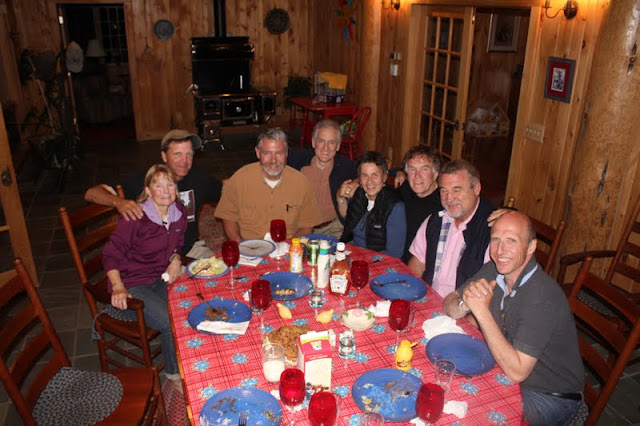 This photograph will be a lasting memory for me sitting round the table at Wintergreen on White Iron Lake: Left to right: Paul and Sue Schurke, Geoff Carrol, Jeff Blumenfeld, Ann Bancroft, Will Steger, Bob McKerrow and Richard Weber. Photo: Ablai McKerrow
Posted by Bob McKerrow - Wayfarer at 05:32