Exploring. From New Zealand to Antarctica and finally New York 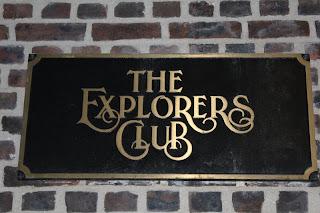 Walking into the Explorers Club in New York last night (Monday 23 May 11) was like walking back a hundred years in history. A club, when it was founded, drew polar explorers, mountaineers, scientists, big-game hunters, under water explorers and admitted members who competed against each other, often with a strong dislike for one another. It was a dream I had from my early twenties, to visit this famous institution.

I started exploring the forests around my neighbourhood in Dunedin, New Zealand when I was five or six. When we got our annual snowfall  I learned to sled down the hill on a portable signboard advertising bread, that I would borrow, or steal temporarily, from the grocery store at the top of the hill. By my early teens, exploring the hills of Otago consumed my spare time. 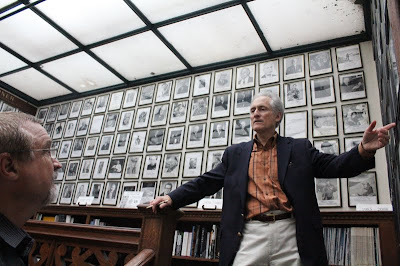 Jeff Blumenfeld a member of the Explorers Club showing me the collection of photographs of members who did oustanding exploration. Photo: Ablai McKerrow

By my late teens I had climbed many of New Zealand’s highest mountains and was wanting to explore other parts of a world I understood little about.

I was 19 years of age I left joined a New Zealand mountaining expedition to the high Andes of Peru  and we explored and scaled 13 unclimbed summits in these unmapped mountains.

I have been an explorer from a young age but what attracted me more than any part of the world, was the Antarctic. The post-war New Zealand baby-boomers were brought up on a diet of the Empire's greatest feats of exploration which was mainly Scott and Shackleton. Little was said about Amunsden the cheeky Norwegian that stole the prized South Pole that was rightfully thought of as part of the British Empire. 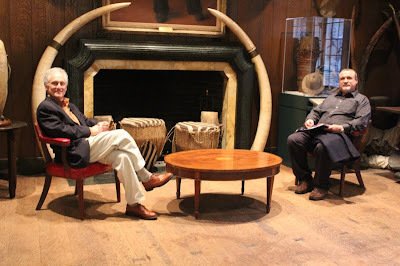 `
Jeff Blumrnfeld and myself in front of the renaissance-style marble fire place in the Clark room on the 2nd floor. Photo: Ablai McKerrow 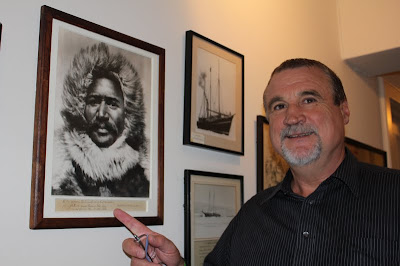 Left: With my most admired explorer, American Matt Henson, a highly successful afro-American polar explorer. He made the last attempt on the North Pole in with Admiral Robert Peary in 1909.
Our 1986 unsupported dog sled expedition to the North Pole followed much of his route. Photo: Ablai McKerrow

Having lived  in Antarctica for 13 months and had the privilege of staying in Scott's two huts and Shackelton's one at Cape Royd's, it was a privilege to hear Edward Larson's lecture at the Explorers Club on Monday night on the subject of:
Re-Inventing Scott: Science in the Heroic Age of Antarctic Exploration.
In summary Andrew Larson spoke on this theme.
Over the 100 years since his death on his return for the South Pole, Robert F. Scott's image has shifted from tragic hero to Victorian bungler. Without excusing Scott's mistakes, this lecture seeks to restore some balance to his image by looking at the role of science in his polar expeditions.
Scott may have been trying to do too much on his expeditions, at least as compared to the single minded quest for the pole that propelled Amundsen's expedition, but they nevertheless left a lasting legacy in Antaractic research and discovery.

I found that Edward gave Amunsden full credit for his achievement of being first at the South Pole, and giving an honest assessment of Scott and Shackleton, two very different men. I bought a copy of Edward Larson's recnt book AN EMPIRE OF ICE which is about Scott, Shackleton and the heroic age of Antarctic science. He kindly wrote an inscription in it. 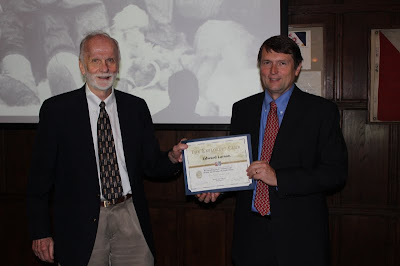 Edward Larson (right) is presented a certificate by one of the Explorer Club committee members for his fine presentation. Photo: Bob McKerrow
So what is the Explorers club all about?
The Explorers Club is an international multidisciplinary professional society dedicated to the advancement of field research and the ideal that it is vital to preserve the instinct to explore. Since its inception in 1904, the Club has served as a meeting point and unifying force for explorers and scientists worldwide. Our headquarters is located at 46 East 70th Street in New York City.

Founded in New York City in 1904, The Explorers Club promotes the scientific exploration of land, sea, air, and space by supporting research and education in the physical, natural and biological sciences. The Club's members have been responsible for an illustrious series of famous firsts: First to the North Pole, first to the South Pole, first to the summit of Mount Everest, first to the deepest point in the ocean, first to the surface of the moon—all accomplished by our members.

I am so grateful to the invitation from Jeff Blumenfeld to visit the Explorers Club in New York on Monday night and hear the stimulating lecture on Scott by Andrew Larson, and to inspect the whole building that the club's treasures and memorabilia are housed.

I thought of how fortunate I have been in having opportunities of driving teams of dogs in the Antarctic and Arctic, a far cry from sledding down a snow-clad hill on a bread board at ten.

We shall not cease from from exploration
And the end of all our exploring
Will be to arrive where we started
And know the place for the first time.

Seems you've had a great trip. The posts inc. this one great and testament to same.

Been uncommonly busy here, but hope to catch up soon on blogging.

I enjoyed the journey immensely and it was a real joy to have Ablai with me.

I look forward to catching up with you.

Kia ora Bob, You've had and have quite an exciting live. The live of an explorer. You must have relived many great memories in that explorer place in New York.

Yes Marja, it has been quite a life, but aren't each of our lives a voyage of discovery?

My favourite bit of your blog recently is definitely the photo of Matt Henson. It reminds me of your blogs about the Maori mountaineers.

We have so few coloured people of any race in our outdoors community. Why is this?

You pose an interesting question.

We have so few coloured people of any race in our outdoors community. Why is this?

Indigenous peoples whether Innuit of nomadic tribes such as Genghis Khan explored as families, tribes or a collection of tribes, to find better lands, and a more sustainable life style. So often starvation stalked them every year.

What we call exploration, indigenous people were moving for survival and sustainability.

Somehow, the European starting with the Vikings, then the Portugese and Spanish, were exploring for the riches to be gained by exploiting nations with weak defences.

A lot of exploration was really economic exploitation. Even when Scott and Shackleton were racing for the North pole, they were doing it for Queen, King and country.

Exploring for fun is a more recent concept, but strangely, a large percentage of people participating are white. The Japanese are the exception having been into polar exploration for more than a century.

From what I see things, it is worth looking at the way the English developed skiing and mountaineering in Europe. The British were the clients or the gentry, and the Swiss guides and porters. St. Moritz is a great example of how the (white) English developed skiing as a sport. I suppose it could be said that the indigenous people were busy doing more important things. my wife who is Asian views mountaineering, skiing, outdoor sports as a frivilous pastime. Maybe she is right.
Yet her tribes, roamed the steppes of central Asia for thousands of years, and sport for them was falconry or horse-based competitions. Maybe we have got it wrong Jamie.