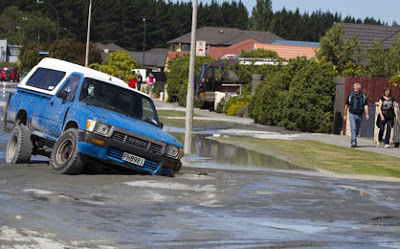 Damage in today's earthquake in Christchurch was quite bad with liquefaction and water spewing through the ground is an ongoing problem.

Mt family and I had just completed 2 levels of high and tight ropes, flying foxes and wobbly suspended steps, and as I was just walking to level 3 of difficulty, when the tree roots I were walking over shook violently  for at least 15 seconds. There was a strong upward thrust and iIlooked up, and there was my son, swinging on a high rope, 20 metres off the ground. EARTHQUAKE was my immediate reaction having been involved in 15 earthquake operations in almost 40 years.

It must  have been a few minutes before 2 pm. NZ time. While we were at Adrenalin forest, we felt two more aftershocks. Then as we moved to some open ground outside Northland mall, all shops were closed down and workers flooded out, many traumatised from so many earthquakes since september 2010.
25,000 people in Easternm Christchurch are without power. In the 2 hours we awaited for some sort of reading or prediction, at least 5 more significant aftershocks accured.

Roger Sutton the CEO of Canterbury Earthquake Recovery Agency said  a few minutes ago he flew over Christchurch  an hour or so agao and said "Liquafaction had affected many areas."

We are on holiday in Christcurch and when we returned to our Motel in Main North road, there were cracks in our room.

I will keep you posted. 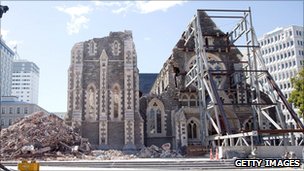 Christchurch was still recovering from an earthquake in Sept 2010 and another more devastating one in February 2011.
Latest from stuff:

A swarm of quakes - including a magnitude 6 and three at or above magnitude 5 - have hit Christchurch, toppling already damaged buildings, injuring residents and disrupting power, phone services and retailers.

The quakes were felt as far south as Queenstown and as far north as Lower Hutt, according to GeoNet. People in Greymouth, Ashburton, Dunedin, Hanmer Springs and Oamaru also felt them.

There were still no reports of widespread damage or injury, but there had been significant rockfall at Redcliffs, police spokesman Stephen Hill said.

A stopbank on New Brighton Road had also collapsed, and there were reports of major holes on Broadhaven Ave and liquefaction in Avonside.

Earlier today, Hill said four people had to be rescued after they were trapped by a rockfall in Boulder Bay.

One person, who was at the Eastgate Mall in Linwood, had been injured and was taken to hospital.

The WINZ building in New Brighton had suffered some damage and staff had to be evacuated.

Many malls were closed and police patrolled streets for damage.

Roads were gridlocked as people tried to rush home, but police warned motorists to slow down and drive with care. Drivers were urged to stay away from the hill suburbs as there was a risk of further rockfalls.

St John Ambulance responded to at least 19 people with various injuries. They included six people who collapsed, two people who had seizures, one person who had a panic attack, and one person who received a knock to their head, St John Regional Operations Manager Chris Haines said.

One person was also treated by St John after having a minor car accident.

The National Crisis Management Centre has been activated in response to the quakes.
Phone services were disrupted and about 26,000 Orion customers were without power in the eastern suburbs, including New Brighton and Dallington.
Posted by Bob McKerrow - Wayfarer at 20:47

It arrived while a good friend from up there and I were doing computer work inc. logging in all over on two Macs to find out more re the earlier ones, then the room started to sway.

Those sort of motions while fascinating once now engender fear in my heart, because they're different to the usual Fiordland based ones and as such the thoughts then flood in saying, if it's this bad here how it must be much much worse in a populated environment, and CHC springs to mind!

The effects on local CHC moral must be debilitating!

I cannot believe what Christchurch is going through. All the years I lived in the Canterbury region I never heard it said that there was serious risk of earthquake there. Same with liquefaction. I just can't believe it.

I currently live in a country where the New Zealand Government travel advisory says only essential travel should be made. But it is a thousand times safer than Christchurch - which is really bizarre.

On a slightly self-interested note, have you seen any sign of the Bill Denz book on your travels? I hear it has been released on a limited basis.