Meeting with President of Sri Lanka 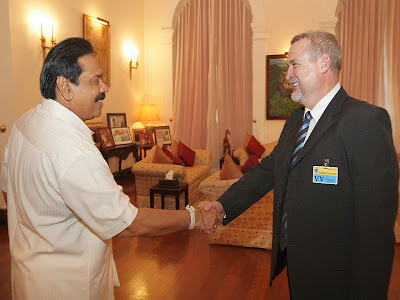 I had the privilege of a two hour breakfast meeting with Mahinda Rajapaksa, President of Sri Lanka this morning. I am grateful to his DG of the media division,  Bandula Jayasekara for making this happen, and who was also at the breakfast.

It was an opportunity to promote the work of Sri Lanka Red Cross, supported by IFRC and PNS. He particularly appreciated the work we have done in terms of providing large water pipelines, latrines and hygiene promotion in schools and communities. He is a staunch supporter of hygiene promotion and spoke of when he visits schools, he asks children what they would like to see improved, and they often say “better toilets and clean water.” We also discussed in detail the work Red Cross has done with the displaced population in the north and east and how livelihoods and economic development is crucial to provide employment.
President Rajapaksa is an inquisitive man who obviously values feedback from people who travel a lot in his country and wanted to know what my thoughts were about the development of Sri Lanka in the post-conflict era. I explained to him in detail about the Sri Lanka Red Cross Society post conflict recovery programme and of the 2000 owner driven houses we have constructed, and of the livelihood and water sanitation grants we provide as well. He expressed a sincere wish that we scale up our work in the north.
Here was I man a felt safe to ask difficult questions and I felt his feelings were mutual. Humanitarian diplomacy is about influencing decision makers and I know he genuinely listened to the challenges we face as a Red Cross Movement in Sri Lanka, and I know we can get more support and cooperation from the Government for our humanitarian work in the north and east. I felt I was also able to get across the viewpoint of the wider humanitarian community in terms of challenes of working in the north of Sri Lanka.. 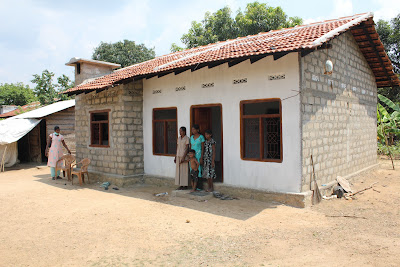 Vimala Rani with some of her children outside her new Red Cross funded house in Vivekanandanagar. She nows earns a living raising chickens and selling eggs. Photo: Bob McKerrow 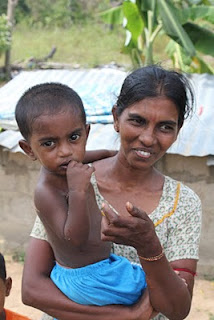 I was able to present the situation of some very vulnerable people such as Vimala Rani the widowed mother of five in Vivekanandanagar, Thavarani  (left) the disabled mother in Krishnapuram with two children, and how the Red Cross programme in the north has given them houses, livelihoods, and they can now live in dignity and safety. I also spoke of Aranchalam the potter and Ramaiyah the icecream man in Kilinnochchi who we made a documentary on 14 months ago and have just produced a documentary showing the improvements in their livelihoods.
With his three sons being talented rugby players we discussed rugby and I presented him a pocket watch which commemorates 100 years of All Black rugby. He told me with a broad smile how his three sons attended the Rugby World Cup in New Zealand and enjoyed it very much.
For me it was a pleasure to meet President Rajapaksa in his own house, over an informal breakfast and to have his son drop in to talk of the work he is doing for reconcilliation by taking musical concerts to Jaffna, and running sporting events and livelihoods in the north. His son is a well known rugby player so we digressed a little onto rugby. 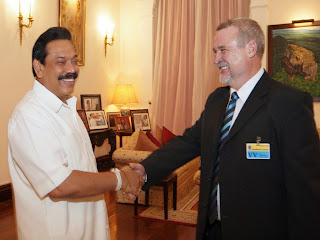 A lighter moment with President Rajapaksa at the beginning of our meeting today.
Posted by Bob McKerrow - Wayfarer at 22:31

Thanks Marja, I think i was talking rugby. Enjoy the weekend.