Who is killing Afghanistan and the Afghans? 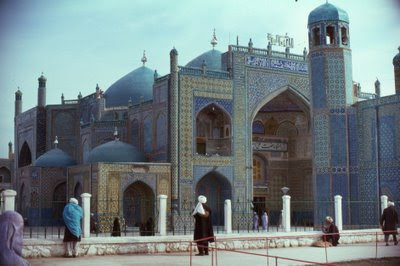 The Blue Mosque in Mazar-I-Sharif which is a Shrine to Ali and revered by the Shia Muslims.  Taken in 1976 when I was working for the Red Cross after a major earthquake in the north. Photo: Bob McKerrow

Bombs kill 58 in Kabul and Mazar-i-Sharif. The BBC's Quentin Sommerville: "It seems this was a co-ordinated attack; it certainly seems to have a sectarian element"

In the deadliest incident, a suspected suicide bomb struck a shrine packed with worshippers in the capital, Kabul, killing at least 54.

Another blast hit the northern city of Mazar-i-Sharif at about the same time, killing four people.

The attacks appear to be of a sectarian nature unprecedented in recent Afghan history, correspondents say.

They coincided with the Shia Muslim festival of Ashura - the most important day in the Shia calendar and marked with a public holiday in Afghanistan.

Ashura is the climax of Muharram, the month of mourning for the martyrdom of the Prophet Muhammad's grandson.

The police have cordoned off all roads to the blast site in the medieval Murad Khani district where many Shias had gathered to commemorate Ashura at the Abu Fazal mosque.

Here, at an emergency surgical centre just 10 minutes from the site, people are gathered crying and wailing. I have heard women shouting: "My son is dead, my son is dead." I have seen people with charred clothing.

Security forces have been ferrying victims to waiting ambulances. There are many wounded too. Those who were there say there are a lot of casualties. People are gathering in front of the hospital and the police are on the streets around here controlling the traffic.

Though tensions exist between Afghanistan's Sunni and minority Shia Muslims, most attacks in Afghanistan in recent years have targeted government officials or international forces, correspondents say. 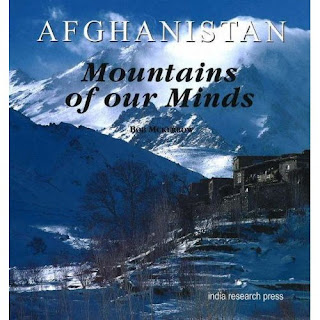 When I lived for three years in Afghanistan (1993-96) I visited the Abu Fazal mosque in Kabul one of the places of today's atrocities, and the Blue Mosque in Mazar-i-Sharif. The book I wrote on Afghanistan provides prose, poetry and photographs of my favourite country and the peaceful nature of the people. Why this today?

The near-simultaneous explosions happened at about midday (07:30 GMT).

In Kabul, the bomb went off near a gathering of hundreds of Shias singing at the Abu Fazal shrine.

Fifty-four people were killed in the blast, said health ministry spokesman Norughli Kargar, while 150 were injured.

"It was very loud. My ears went deaf and I was blown three metres [yards]," Mustafa, who uses only one name, told Associated Press news agency.

"There was smoke and red blood on the floor of the shrine. There were people lying everywhere."

Amid the chaos straight after the blast, a young girl, dressed in a green shalwar kameez (traditional dress) smeared in blood, stood shrieking, surrounded by the crumpled, piled-up bodies of children, AFP reported.

Afghan President Hamid Karzai spoke of the unprecedented nature of the attack, saying it was "the first time that, on such an important religious day in Afghanistan, terrorism of that horrible nature is taking place".

No-one had claimed to have carried out the attacks, said Mohammad Zahir, head of Kabul's criminal investigation department.

A Taliban statement said the group had not been behind either incident.

Police said they foiled another attack elsewhere in the capital.

Thanks to the BBC for permission to run this article.
Posted by Bob McKerrow - Wayfarer at 04:56

How awful to live in such fear in such distress. My thoughts are with these people

What's up, all is going perfectly here and ofcourse every one is sharing facts, that's in fact fine, keep up writing.