Iran is a much mis-represented country.

Iran is a much mis-represented country and was once home to the world’s earliest super power.

In 1979 I bought a copy of CROSSROADS OF CIVILIZATION -3000 years of Persian History by Clive Irvine. I was living in Geneva at the time and the book started a lust for learning about Persia, Central Asia, Afghanistan, northern Pakistan and India, all places that were once part of the Persian Empire. In his book Irving says “ The first Persian Empire under Cyrus the Great transformed the scale on which societies were organizised, and reconciled many people under one rule. Persians struggled to preserve their identity, indeed, each invasion was succeeded by a remarkable cultural flowering of an essentially Persian character, manifested in the poetry of Firdausi, the buildings of the Seljuks, the minature paintings of the Timurids, and the mosques of Isfahan.

In 1976 I spent considerable time in Afghanistan working for the Red Cross, first an earthquake, then a flood relief operation. I got close to the Iranian border many times and I understood that Afghanistan was once part of the Persian Empire for thousands of years. Here I began to understand for the first time. the scale and the culture of the Persians. 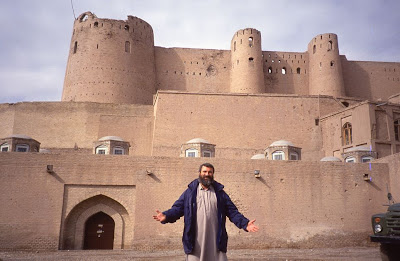 Bob McKerrow in 1994 at one of the forts built by the Persians in Herat, Afghanistan. Photo: Bob McKerrow collection.
So last week, another dream came true when I visited Iran for the first time and what I saw completely exceeded my expectations. It made me wonder as to why the world media is so biased about Iran for I found the people warm, intelligent and hospitable, and walked freely in all parts of the capital and adjacent Elburz mountains. People went out of their was to be helpful.

In these sad and dirty days of demonization and prejudice few books could be more apposite than Jason Elliot's thoughtful portrait of Iran Mirrors of the Unseen: Journeys in Iran

Jason’s book is clearly the best book written on Iran for decades and has received brilliant reviews. Jason Elliot stayed with me in Kabul in 1996 when he was working on his first book, ‘An Unexpected Light – Travels in Afghanistan and he came to our wedding in 1998 in Almaty Kazakhstan. We have remained friends ever since and rather than give my fleeting impressions of Iran, it is best coming from a Farsi speaking traveller who lived for years in Iran, and from one of his reviewers, Sara Wheeler.

Focusing on the tradition and spirit of the Persian people and avoiding contemporary politics, Elliot deploys a guileful blend of traveller's tales, topographical description and history - spiced up with a treatise on the meaning of Islamic art - to guide the reader towards an understanding of what that ancient country is, and, perhaps more importantly, what it is not.

A fluent Farsi-speaker, the author has solid experience of the region: his previous book, An Unexpected Light (2000), illuminated his travels in Afghanistan, Iran's eastern neighbour. In this new work he recounts a sequence of journeys over several years and at different seasons. Eschewing, as far as possible, the dismal wastelands of the urban centres, he shapes his voyages around the ruins and glories of old Persia. They embrace Isfahan, the 17th-century capital; the Mongol Ilkhanid northern capitals Sultaniyya and Tabriz in east Azerbaijan; Kurdistan and the remote and vertiginous Iraqi border, a smugglers' route for alcohol and satellite televisions. He takes in the Seljuk-era Assassins' castles near Qazvin, and, south of Shiraz in the heartland of ancient Fars, the pre-Islamic ruins of the first Sasanian palaces. And finally - of course - he inspects the Achaemenid remains at Persepolis. 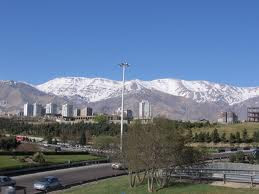 The Elburz mountains with Teheran in the fireground. Photo: Bob McKerrow

Travelling on boneshakers and sleeping in dives, he drops in on the zurkhaneh, a kind of ritualised martial-arts arena, on Tehrani cocktail parties where he spies tattoos under the chadors, and on the world's first Caspian horse-breeding centre. He conjures the warm, cetacean puffs of steam from a samovar, the crackle of hollyoak branches and the shadowy mass of a Golestan bear, the trembling lamp of frosted glass in a dining car. As always, it is when he homes in on the tiny detail that the travelogue works best: supine on a stone slab in a hamman he describes watching individual drops of water detach from the ceiling, "feeling the tension grow in my forehead at each looming descent before the meteor-like impact". Everywhere he finds a people disillusioned with the broken promises of the regime - a bone-deep weariness and resentment. There is no crowing about uranium enrichment among ordinary Iranians. They are more interested in whether Elliot knows someone at the embassy. 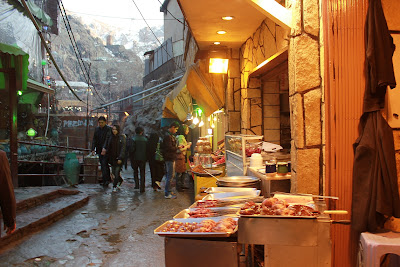 In the early chapters Elliot struggles to find a voice, but as the pages turn he emerges as a sympathetic companion on the dusty road, lying to young women about his age and coping with disappointments with warm good humour (a taxi driver, he says, "robbed me courteously"). In a village near Yadz he spends the evening propped up against a cold stone wall deafened by the shouts of his hosts and the blare of the ubiquitous television. "I had often wondered," he confesses, "what it might be like to shoot a television." Always game for a waterpipe with a Turkman or a coy conversation with a veiled beauty, his puppy-like enthusiasm rarely wanes, yet he also has a sharp eye for the bathetic, missing one major site because he is sitting on the wrong side of the bus. 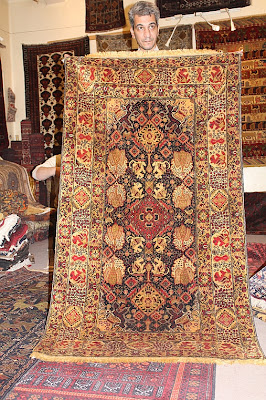 Elliot is not a stylist, but his prose is clear, notwithstanding a tendency to overwrite. "At midday," he explains, "funnelled through octagonal crowning oculi, the light drives downwards like an incandescent whirlpool, into which anyone passing seems to momentarily ignite like a human filament before being extinguished on the far side." Sustaining the narrative drive with lashings of direct speech, he elsewhere fails to win the war against cliché (an enemy wreaks havoc, the shah's days are numbered and every baleful event is heralded as "fateful"). But he quotes judiciously from his predecessors among travellers to Iran, notably, of course, Robert Byron, an author who has become such a Homeric figure in the consciousness of contemporary travel writers. (Byron, Elliot can't stop himself remarking, "spoke hardly a word of Persian".) He also quotes wisely from Hafez and the other great Persian poets, noting what a vital role poetry plays in the national psyche.

Rezi Ghaderi and his family have been selling quality Persian carpets for centuries. Photo Bob McKerrow

He has a firm grasp of history, whether describing the cavalry assault of Hulegu Khan and the ensuing Pax Mongolica, or Parthian fratricide and the volleys of flaming naptha bombs and jars of bloodsucking flies catapulted at Septimius Severus from within the besieged walls of Babylon. (He is less sure-footed off his patch, locating Herodotus 300 years too late in the second century BC.) As dynasties rise and fall he explores the concept of Persian identity. Any writer seeking to explain a culture east of Italy must be alert to the vital spiritual dimension, that mystical aspect of the human condition so conspicuously absent in the rootless west. Elliot is wonderful on this. In one of the best passages in the book he invokes Kipling's never-meeting twain, rightly regretting the debasing of even the words "mystic" and "spiritual" in our own language. Everyone struggling to understand Iran must grasp the fundamental truth of this gulf. To underline its importance, Elliot has taken as his title a reference to the Persian acknowledgement of an unseen world - ghayb - from which the soul receives its most rarefied nourishment. Everything existing in the visible world is the imperfect mirror of this hidden reality. 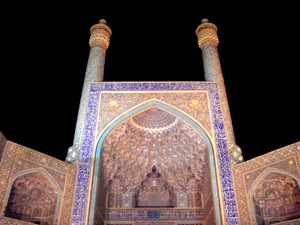 Through all his travel stories and all his historiography, Elliot traces the influence and development of the visual arts, and it is above all architecture that compels him. Many pages of intricate description reveal how viscerally he responds to "reciprocating melodies of light and colour", sensing pressed behind them "a language longing to be heard". He makes discoveries about site geometry, finding underlying principles of numbers and harmony - at one point he sits up till dawn with a map and a pair of spills, measuring the orientation of the Isfahan mosques. Alongside the physical journey the narrative thread follows his internal voyage towards an understanding of Persian architecture, calligraphy and painting. Mirrors of the Unseen is, above all else, an apologia for the unifying underlying meaning of Islamic art. Elliot leads the reader by the hand along his own trajectory of understanding, showing his presuppositions confounded and his "eyes being slowly retrained". Two hundred pages in (still less than half way), he announces: "I felt that, very slowly, I was actually learning something." 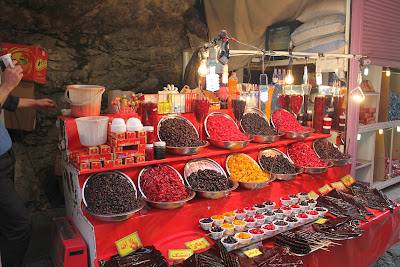 Dates and fruits from all parts of Iran are on sale in almost every street: Photo: Bob McKerrow

His bonnet is buzzing with bees, the noisiest of which concerns the metaphysics of the art he so admires. These have been summarily overlooked by scholars, Elliot reckons. Indeed he claims to have personally discovered layers of meaning ignored by thousands of pages of academic inquiry. "Islamic art as a whole," he states, "is seen by the great majority of art historians as essentially decorative, and lacking in any underlying principles." Only Arthur Upham Pope, author of the magisterial 15-volume Survey of Persian Art and Scholarship, is let off the hook. Otherwise Elliot accuses everyone who has ever thought about an old Persian building of judging that Islamic art cannot possess anything so vague as a "spirit". As the book unfurls he returns obsessively to this theme and becomes increasingly aggressive about it, even suggesting that "nearly all" contemporary studies of Islamic art converge on the verdict that it is "wholly lacking in ontological significance". Perhaps. It is a measure of Elliot's self-absorption that he thinks he is the first to think about meaning. But he does have some fresh ideas, and it is bold of him to make the rubbishing of generations of scholarship the central plank of his book. 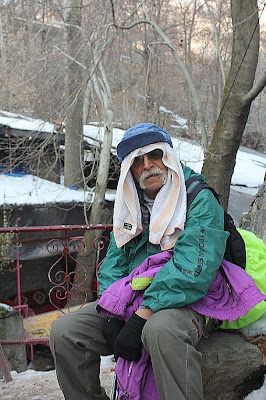 Like Byron, Elliot displays a daring approach to form, even including a handful of sorties into fictional recreation of historical scenes. Striving to deliver history with a light touch, at one point he interpolates a footnote about a University Challenge contest between rationalists (Aristotle to Freud) and Mystics (Pythagoras to Gurdjieff), with King Solomon in the Paxman seat. He brings it off triumphantly, overall, though almost every chapter would have benefited from distillation. At 520 pages, few readers will wish this book longer (to be fair, before the longest essay on the origins and history of Islamic art he inserts a caveat lector advising uninterested readers to skip to the next chapter). Mirrors of the Unseen is not without problems. But it is indubitably important. It is a work of profound thought, imagination, passion and ambition. It should be widely read. And not, I hope, as the bombs are falling.

A 75 year old man I met walking up a track in the Elburz mountains. He'd lived all his life in the mountains. Photo: Bob McKerrow
Posted by Bob McKerrow - Wayfarer at 20:17

I'm glad you finally got to visit Iran, it must be a fascinating place...so central to so much of human history.

The persian poetry is one of the most beautiful in the world. I love the architecture. The people are beautiful.. I would never go to Iran though for the simple reason that I am a woman.

Take a look at my webѕite - earn money uploading videos