In 1979-80 I was the Regional Commissioner for the Ministry of Civil Defence based in Palmerston North covering the very earthquake-prone Wellington province and all of the central and lower North Island. Having worked 8 years in major disasters overseas, and knowing how disaster-prone the region was,  I was very concerned about the search and rescue capabilities of professional and volunteers teams. I expressed my concern to General Holloway the Director of CD, and we held a number of meetings and workshops to look at how we could strengthen urban search and rescue.
Therefore, I was delighted to read today of New Zealand's Urban Search and Rescue team gaining a United Nations classification.

The decision was made on Wednesday after a 71-member team was put through a gruelling 36-hour exercise simulating the aftermath of a 8.3 magnitude earthquake in the Fijian city of Suva at a former freezing works in Palmerston North 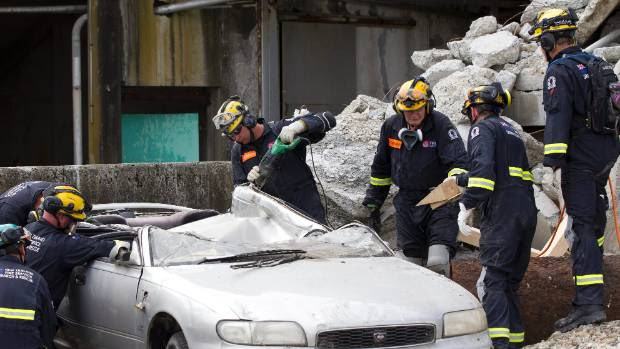 .A panel of eight UN classifiers said the team had "demonstrated strong competency" across all aspects of urban search and rescue – from logistical and management expertise through to reconnaissance, use of search dogs, technical rescue skills and medical treatment of victims.
Classifiers graded the team in 136 categories, giving a green – the highest rating – in all but seven areas. The second category, yellow, signifies some room for improvement. A single "red" or fail, would have disqualified them.
Classification team leader, Arjan Stam, of the Netherlands, said they were "extremely pleased" with the New Zealand team's performance.
"In fact, if there had been a gold rating, they would have received some of them instead," he said.
New Zealand is the 41st USAR team in the world to have either a medium or heavy-capacity classification.
As a heavy-capacity team, it meets the requirement to carry out incident management, search, rescue, medical and logistics activities at two disaster sites simultaneously for up to 10 days.
It also satisfies the requirement to be able to identify hazardous substances, to have a dog search capability and a technical rescue capability, and to be self-sufficient for all power, water, supplies and equipment needs.
Paul Baxter, Chief Executive & National Commander of the New Zealand Fire Service, which led the exercise, said the UN decision was a vindication of many years of hard work to raise the country's USAR capability to world-class standards.
As a member of the UN's International Search and Rescue Advisory Group, New Zealand would now increase its commitment to training and mentoring work with other countries in the Asia-Pacific region, he said.
USAR has more than 200 search and rescue personnel at bases in Auckland, Palmerston North and Christchurch.

Thanks to the Manawatu Standard for permission to run this article.
Posted by Bob McKerrow - Wayfarer at 23:18