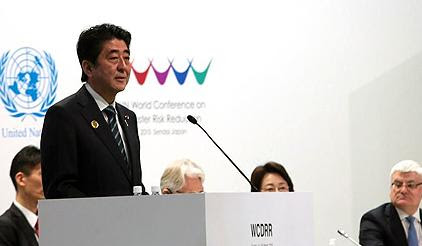 14 March 2015, SENDAI – The Japanese Prime Minister, Mr. Shinzo Abe, today pledged $US 4 billion to support implementation of the “Sendai Cooperation Initiative for Disaster Risk Reduction” over the next four years.

Speaking at the opening of the Third UN World Conference on Disaster Risk Reduction, Mr. Abe said: “Disaster risk reduction is the most important challenge for both developed and developing countries. For developing countries in particular, where 90% of disaster victims are concentrated.”

The package will focus on the development of disaster-proof infrastructure, the promotion of global and regional cooperation and the training of 40,000 government officials and local leaders to play a leading role in national efforts for disaster risk reduction. Japan will make its expertise and knowledge available.

The French Foreign Minister, Laurent Fabius, made an appeal at the Conference opening for the creation of a worldwide early warning system for Climate Disasters - “Climate Disaster Warning” - as he stated that 70% of disasters are now linked to climate change, double the number of twenty years ago.

He said the objective was to provide the most vulnerable countries, including small island developing states, with access to real-time weather and climate updates, information and communications technology and to support a SMS-based alert system.

Mr. Fabius is incoming President of COP21, the 21st session of the Conference of the Parties on Climate Change which will take place December in Paris. He said that disaster risk reduction and the struggle against climate change are totally linked. He said: “It is necessary to tackle these problems together and not separately.”

The Conference attended by 186 governments will adopt a new post-2015 framework for disaster risk reduction on March 18 in place of the current Hyogo Framework for Action adopted ten years ago at the last World Conference on Disaster Risk Reduction held in Kobe, Japan. For more information
Posted by Bob McKerrow - Wayfarer at 07:04