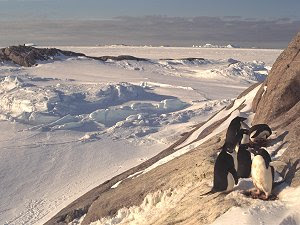 I sit on my bed in Jakarta on the 19th floor and watch clouds building up. Jakarta sprawls beneath me. I have been sick the last three days but last night was so weak, that I have taken a day off work. I usually feel guilty doing that but today I don’t. I am reading Jon Krakauer’s book, Into the Wild.

It was given to me on Sunday by Bernard, who works as a forester with GTZ. Ann, his pretty Vietnamese wife bubbles with enthusiasm. They are a delightful couple, so natural. Bernard is close to nature. His books exude an intensity of trees, plants, insects and ecosystems, as well as raunchy adventure stories that feed our sense of being the gladiator or the spectator at the Coliseum.

It seems I was destined to be sick as I needed to read this book. Having been to the South and North poles, scaled the heights of the Andes, Tienshans and the Himalayas, I have been living in a comfort zone. It is three years since I spent quality time alone in the wilderness. Between 19 and 22, I spent virtually all my time in the wilderness including 13 months with 3 other people alone in a remote part of Antarctica. One week in every four I would be on fire watch alone from 9 pm to 7a.m. This was the best time in my life. For after ten months, I found a friend. First I had to get to know my biggest enemy, myself, and then befriend and appreciate him. I also realised that a man without a woman, is a man without vanity. I read Thoreau. Walt Whitman, William McGonagal and books of the great polar explorers.

I remember doing winter and spring journeys in -50 oC with Gary Lewis and shudder at the risks we took in Antarctica.. Twenty one and not a care in the world. I planned an expedition to Greenland that winter and charted my life ahead of me. I can identify with Chris McCandless who gives his savings to charity, abandons his car and hitchhikes to Alaska and walks into the wilderness to be alone and figure out the meaning of existence. Four months later his decomposed body is found by a hunter……

On July 2, 1992 McCandlas finished reading Tolstoy’s “Family Happiness,” having marked several passages that moved him.
"I have lived through much and now I think I have found what is needed for happiness. A quiet, secluded life in the country with the possibility of being useful to people..." to who it is easy to do good, and who are not accustomed to have it done to them; and then work which one hopes may be of some use; then rest, nature, books, music, love for one’s neighbour – such is my idea of happiness.. And then, on top of all that, you for a mate, and children, perhaps - what more can the heart of a man desire ?
Posted by Bob McKerrow - Wayfarer at 20:43