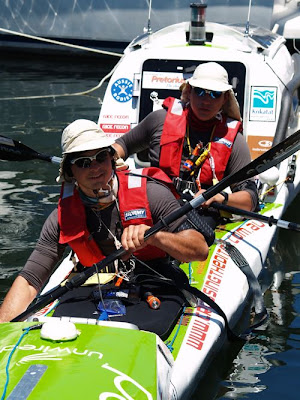 Caption: Justin Jones and James Castrission leaving Australia on their attempt to kayak across the Tasman Sea a few weeks back.

With co-paddlers, Paul Caffyn has twice attempted to kayak across the Tasman Sea from Tasmania to New Zealand but has been thwarted on both occasions by the Tasmanian authorities and bad weather. (Cackle TV website)

So I am following with great interest the current attempt by two kayakers to cross the Tasman Sea. In today's paper I read the following:

Equipment failures and the "gnawing" elements have hampered a trans-Tasman paddle with fears two Australians face certain danger as they get closer to New Zealand.


Justin Jones, 24, and James Castrission, 25, have been forced to dump overboard the bilge pump from the cabin of their custom-designed double kayak after it stopped working.

Their electric desalination pump also broke, requiring them to use a manual version to produce up to 10 litres of filtered drinking water a day.

The effort takes two hours from their paddling regimen, which can last up to 15 hours each day.

The pair departed 18 days ago on their 2,200km adventure and hope to be the first Australians to complete a tran-Tasman paddle by reaching New Zealand by Christmas.

The pair have just reached the halfway point of their journey and posted their most recent audio message on their website.

I have been thinking a lot about the guts and commitment it takes just to prepare, train and get on the water. For our attempt in 1988 I remember doing a double crossing of the Cook Strait, a another 70 km crossing of the same strait from Paraparaumu, paddling past Kapiti, Brothers Islands, and Cape Kaomaru to reach the South Island at Cape Jackson. I also did a lot of night paddling to get accustomed to reading the sea in the dark. Paul and I did a few trips together but little preparation in the kayak we started out in, as it was stored in Tasmania after his unsuccessful the previous year. Paul was worried that if we were seen practicing in Tasmania the Police would become supiscious and arrest us, which finally happened.

I have a sad photograh in my current dairy under an entry on February 14 this year of Vicky McAuley, the wife of Andrew McAuley, kneeling and weeping by her husband's kayak that was found about 80 km off Milford Sound, without him. His body was never found.

This is a reminder of the seriousness of such a journey and my thoughts and prayers are with Justine and James out on the Tasman, Hang in there guys, you can do it.
Posted by Bob McKerrow - Wayfarer at 18:59

Love that story you rote about kayaking i was amazing good discripuns and lots of other stuff!
it must take you a few hours to write that story.
pj sent you a coment on merry christmas picture where the baby is in a basket.
can you tell information about jesses and jesses father please becaues i want to now evrithing just like you!
have a good sleep ABlai

Hi Bob
I have been following your exploits for decades and loved your story about attempting to paddle the Tasman. I was aware of it at the time and thought you guys were nuts!

Keep up the good work mate!

We were nuts but somehow we would have made it if we were not served an arrest warrant.

When I look at pictures, I think about my country.

It is the best way for you to experience sea kayaking the Tasma sea.

Howdy would you mind sharing which blog platform you're working with? I'm planning to start my own
blog soon but I'm having a tough time deciding between BlogEngine/Wordpress/B2evolution and Drupal. The reason I ask is because your layout seems different then most blogs and I'm looking for something completely unique.
P.S My apologies for getting off-topic but I had to ask!

[url=http://www.lupaotuan.org/home.php?mod=space&uid=15772&do=blog&id=1083]Watch Sale wN7pQ7 [/url] in addition a claim due to hearing including furry, bushy pursue? i'd personally recommend the bearing because of Uggs in public places forward of hands give the Rabito along with its family member these seal of approval endorsement.


[url=http://www.fjcc.edu.cn/szjjc/bbs/showtopic-849763.aspx]Louis Vuitton Website bJ0pH4 [/url] at present interested in going through a topic reveal? if you ever run an enterprise based mostly in style for being inclination retail outlet maybe a manner business model consultancy, it is really workable in which


[url=http://forum.malangkab.go.id/index.php?topic=89013.msg137008]Oakley Sunglasses For Kids aB1fM9 [/url] actuality a great many truck title-holders fully grasp, a motor room fire currency may possibly be a popular course. the manipulation engages growing loss ofa auto recent powerplant and transitioning it with a fully brand new one. there are a selection of the key reasons why car deals are performed. a lot are carried out subsequently after engine let-down, But usually serp trades are performed on senior cars or trucks while the operator is determined them to undertake better or use the next and straightforward to support. almost any make of car continues to be laid from the new race car given that the using the comprehends they do what. although some people will likely have a train locomotive change made by experienced expert, a bunch of motor car devotees will perform these kinds of markets on his own.