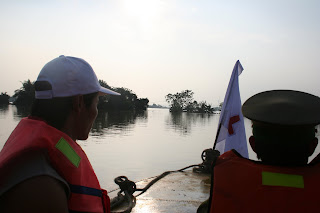 This story was posted on Alertnet today.
As we come close to the start of UN Climate Change Conference in Bali, Bob McKerrow, Head of the International Federation of Red Cross and Red Crescent’s Indonesia delegation reflects on where the world’s oldest and largest humanitarian organisation has come from in terms of championing environmental issues.

McKerrow is one of the longest-serving IFRC delegates and has also published three books inspired by nature. He has climbed and trekked extensively in New Zealand, Europe, Peru, Antarctica, Borneo, East Africa, Nepal, India, Central Asia and has also been on expeditions to the Arctic and Antarctic.

In 1972, the United Nations Conference on the Human Environment was held in Stockholm, and for the first time united the representatives of multiple governments in discussion relating to the state of the global environment. This conference led directly the creation of government environment agencies and the UN Environment Program

Henrik Beer, Secretary General of the International Federation of Red Cross and Red Crescent Societies (from 1960-82) participated in the 1972 UN Conference on the Human Environment in Stockholm, and was deeply moved and somewhat traumatised by predictions of the earth slowly destroying itself. He left inspired and determined to get the Red Cross movement involved in environmental programmes in order to stop the environmental degradation that he believed was worsening the plight of vulnerable people.

In 1972-73 the phrase “Climate Change” had not been coined, but Henrik Beer’s vision changed the way Red Cross societies thought and acted, as they started getting into environmental programmes which set the foundation for an easy understanding of the later, and insidious onset of Global Warming.

Inspired and driven by Henrik Beer, national Red Cross and Red Crescent Societies started getting involved in environmental programmes. Environmental concerns found their way to the highest levels of governments and the international community. Slowly Henrik encouraged Red Cross societies such as Ethiopia - suffering from drought in 73-74 - to plant trees and get the youth involved. He had similar messages for flood-stricken Nepal and India. He was passionate about reforestation, he understood overgrazing and the need to protect our mountain lands and water catchments. In 1975 when I went to Nepal as a disaster preparedness delegate, he reminded me of the need to plant trees and make the young aware of the need to care for the environment.

In 1981, when I was working in India on a huge cyclone preparedness programme, Henrik Beer made his last field visit as secretary general. before retiring. We were building 233 cyclone shelters and part of the programme was an integrated disaster preparedness programme where young volunteers planted trees to protect the coastline and shelters. They also kept drainage canals from being blocked. Henrik was thrilled to see the Indian volunteers active with environmental programmes. Today, planting trees for protection along cyclone prone coastlines would be described as a good example of a climate change programme.

Henrik Beer started his tenure as secretary general in 1960. Just two years later the publication of “Silent Spring” by Rachel Carson highlighted to the impact of chemicals on the natural environment. In 1967 the Torrey Canyon oil tanker went aground off the southwest coast of England, and in 1969 oil spilled from an offshore well in California's Santa Barbara Channel. In 1971 the conclusion of a law suit in Japan drew international attention to the effects of decades of mercury poisoning on the people of Minamata.

At the same time, emerging scientific research threw the spotlight on existing and hypothetical threats to the environment and humanity. Among them were Paul R. Ehrlich, whose book “The Population Bomb”, published 1968, revived concerns about the impact of population growth. Biologist Barry Commoner generated a debate about growth, affluence and "flawed technology." Additionally, an association of scientists and political leaders known as the Club of Rome published their report The Limits to Growth in 1972, and drew attention to the growing pressure on natural resources from human activities. Meanwhile, nuclear proliferation and photos of Earth from space emphasized the consequences of technological accomplishments, as well as Earth's truly small place in the universe.

Henrik Beer was a voracious reader and kept abreast of world affairs and especially topics related to humanity and environment. I was fortunate in coming to Geneva in early 1975 as a young desk officer and met him on many occasions. Henrik spoke with conviction and passion about the environment.

His words, spoken over three decades ago, could have been written yesterday as a rallying call for all civil society and government organisations to come together and safeguard our future:

“Can the agencies and the many INGOs each treat the world network of organizations as an administrative problem when it clearly represents an unstudied social problem? Is it not an unexplored global network of resources — of which the governmental and business worlds are an integral part -- which has not yet been effectively related to the peace/population/food/development/education/environment crisis precisely because the functional relationship of all the parts to the social whole is repeatedly and systematically ignored in organizational decisions? It is no longer useful to concentrate on the problems of one "independent" organization or group of organizations (as though each operated as an autonomous frontier outpost surrounded by uncharted terrain). Nor is it useful to. focus on a single geographical region or subject area -- it is now essential to look at the problems of the network of interdependent organizations and their inter- related concerns.”

.The interest in environmental issues is reflected not only in the wide body of literature and debate, but also by the rock songs of that period.