Road Map of the Roman Empire - the Silk Road 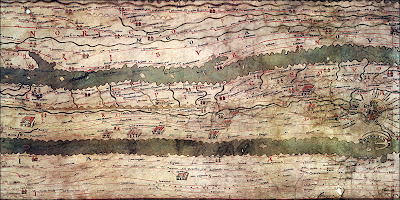 The Tabula Peutingeriana is one of the Austrian National Library's greatest treasures.

Some months ago I wrote some articles with maps and photos on my travels along the Silk Road in Central Asia. Recently I discovered a magnificent story on the BBC website with a photo of a parchment scroll with a road map of the Roman Empire.

The parchment scroll, made in the Middle Ages, is the only surviving copy of a road map from the late Roman Empire.

The document, which is almost seven metres long, shows the network of main Roman roads from Spain to India.

It is normally never shown to the public. The parchment is extremely fragile, and reacts badly to daylight.

But it has been on display for one day to celebrate its inclusion in Unesco's Memory of the World Register.


At first sight, it looks very unlike a modern map.


Both the landmass and the seas have been stretched and flattened. The Mediterranean has been reduced to a thin strip of water, more like a river than a sea.


Instead of being oriented from north to south, the map, which is only 34 centimetres wide, works from west to east.


But despite its unfamiliar appearance, the director of the Department of Manuscripts, Autographs and Closed Collections at the Austrian National Library, Andreas Fingernagel, says it is an intensely practical document, more like a plan of the London Underground than a map.

"The red lines are the main roads. Every so often there is a little hook along the red lines which represents a rest stop - and the distance between hooks was one day's travel."

"Every so often there is a pictogram of a building to show you that there was a hotel or a spa where you could stay," he said.

"It was meant for the civil servants of the late Roman Empire, for couriers and travellers," he added.


Some of the buildings have large courtyards - a sign of more luxurious accommodation.

At the centre of the Tabula Peutingeriana is Rome. The city, represented by a crowned figure on a throne, has numerous roads leading to and from the metropolis. Some, such as the Via Appia and the Via Aurelia, still exist today.


The Tabula Peutingeriana scroll dates from the late 12th or the early 13th century and was made in Southern Germany or Austria.

But Mr Fingernagel says it is very different from other medieval maps and is clearly a copy of a much earlier document, dating back to the 5th century.

"The interests of map makers in the Middle Ages were quite different. They don't show roads or rest stations, instead they show the holy places of Christianity."


And the map contains other details which indicate the original probably dates back to the 5th century, including the city of Aquileia, which was destroyed in 452 by the Huns.


The scroll was named after one of its earlier owners, the Renaissance German humanist Konrad Peutinger.

Later it was obtained by the Imperial Library in Vienna - now the Austrian National Library.

"It's unique," said Mr Fingernagel. "It's the only map of the ancient world - although it's a copy - that gives us an impression of how things used to be."


The Tabula Peutingeriana was included in the Unesco Memory of the World Register this year, and was on limited view in Vienna on 26 November 2007.
Posted by Bob McKerrow - Wayfarer at 22:01

Well... round about every blog posts online don't have much originality as I found on yours.. Just keep updating much useful information so that reader like me would come back over and over again.