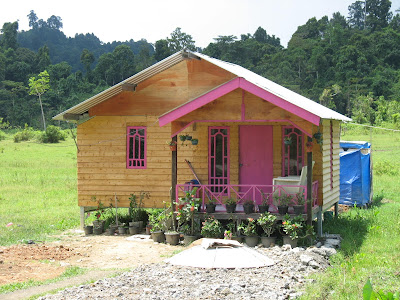 Photo captions: Above: One of our 6300 shelters on Simeulue island.
Below: Map of Simeulue Island near the star.

Last week I visited the remote Indonesian island of Simeulue, situated off the west coast of Aceh province.

The International Federation of Red Cross and Red Crescent Societies have supported the Indonesian Red Cross to build 6300 transitional shelters on the island which has a population of 80,000 people. This has been a huge undertaking using ships, barges, landing crafts and trucks, where there are roads. I went there on an inspection visit, and to attend the opening of the new airport at Bandara Lasikin, and for the opening of a Japanese Red Cross (JRC) sponsored hospital in the capital Sinabang, the opening of a JRC primary health care centre and housing project completion ceremony at Kampung Aie. This ceremony which was held in a JRC community centre and attended by a huge number of village people, marked the completion of 1062 houses and three community centres in Simeulue and Meulaboh. A Red Cross festival was running for a week in the Kampung to provide the beneficiary communities with the opportunity to learn more about the Red Cross Red Crescent Movement.


Now a little about this fascinating island. Simeulue was close to the epicenter of the 2004 Indian Ocean earthquake, but loss of life was surprisingly low, mainly as the people are familiar with earthquakes and tsunamis in this seismically active region and so knew to leave the coast after the earthquake. Local folklore has it that a huge earthquake and tsunami hit Simeulue in 1907, killing many of its inhabitants. Many died when people rushed to the beach when they saw the water recede, exposing the coral and fish. They went to collect the fish not realising that the water would come back with a vengeance. Those who survived told the story of the 1907 semong, the local word for tsunami, to their children. It is largely because of this oral history that many in Simeulue say that they instinctively knew what to do when the December 26th 2004 earthquake and tsunami struck. Simeulue rose at least 6 feet on the eastern coast, during the March 28th 2005 earthquake, leaving the flat top of its coral reefs above high tide level and dry and dead. On the west coast, the land was submerged, seawater flooding fields and settlements.

I will write more about Simeulue when I find time.
Posted by Bob McKerrow - Wayfarer at 21:48

Well, I'm a bit surprise and amaze actually .. My Head of Delegation has a wonderful blog and pretty much cool also.

I'm one of your staff in Simeulue Sir and proud to have you as our Head of Delegation !!

Well, I'm a bit surprise and amaze actually .. My Head of Delegation has a wonderful blog and pretty much cool also.

I'm one of your staff in Simeulue Sir and proud to have you as our Head of Delegation !!

Hello....
Thanks a lot fro your attention to my
island....
i hope, ypu won't to forget me here in simeulue island..

Who will ever forget the wonderful people on Simeulue Island ? I enjoyed my time there so much and the Red Cross is still doing a lot of work there. Thanks

thanks verymuch. we all love simeulue. i hope, we can built/ develop simeulue together...

Hey! I know this is kinda off topic but I was wondering if you knew where
I could locate a captcha plugin for my comment form?
I'm using the same blog platform as yours and I'm having problems finding one?

Heya i am for the primary time here. I came across this board and I in finding
It really helpful & it helped me out much. I hope to give one thing back and help others like you helped me.