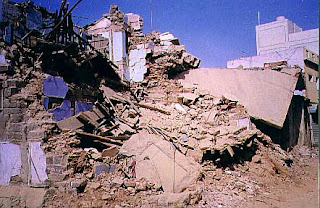 The last 35 days have been the toughest of my life. More difficult than the North Pole expedition of 1986, tougher than any mountain I've climbed. The first 5 days I had no sleep and since then for the last 30 days I've survived with a handful of hours every night. God knows how I've kept it up. Finally I am having this weekend off after having spent the last 14 days in Bhuj and Bachau. The dust, the dirt and stench of decomposing bodies permeates every pore of your body. People speak of a death toll of over 100,000 now which I can readily believe.

Running and coordinating a team of over 150 foreign delegates, supervising a 350 bed hospital plus two other field hospitals, getting vital relief goods out to over a million of the worst affected people, organising pycho-social counselling teams, orthopaedics centres for those 2000 or more children who lost limbs has been a momentous challenge. We now have a team of highly trained professionals from 21 countries working together with the Indian Red Cross.

Phil Goff, our Minister of Foreign Affairs arrived last night and is travelling today with the NZ High Commissioner and a top level mission from NZ, from Delhi to Bhuj on our plane (which we have chartered for the first 3 months) to see our operation. As I desperately need some time to myself I have sent my deputy, Alan Bradbury, another NZ'er with them to show them round. I'll have dinner with them when they get back

I reflect on some of those harrowing days.
In a narrow street behind a school in Bhuj town, a crowd of people wait anxiously for the arrival of an Indian Red Cross truck. It might not sound much but this truck will bring enough tents to provide shelter for a minimum of 2,300 people.

This distribution of tents is the second one of the day by the Indian Red Cross in Bhuj and the supply cannot meet the demand. Wherever one looks in the town, there is rubble. Bhuj has suffered terribly from the earthquake that hit western India two weeks ago. A town with a population of more than 150,000 people, it had one of the highest official death tolls with a minimum of 6,000 people killed while the number of injured was put at more than 60,000.

Among those waiting slightly apart is a woman holding a baby in a bundle. Hina Chanchal's husband is among the crowd of men surrounding Indian Red Cross officials to see if they are on the list of people who will be given tents.

Like all the others there, Hina lost her home in the earthquake. Although none of her family was killed, she saw the teenage daughter of a neighbour die after being trapped under the debris for several hours. She too had a narrow escape after having to run back inside the house to get her baby.

"It is almost as if God had put a protective corridor around me," she says. "Everyone in front of me and behind me had debris falling on them. I and my baby seemed to have a clear escape route."

Now she and her family of 8 that includes her mother and sister, live by the side of a street. The nights are cold in Gujarat at this time of the year and with each passing day spent living in the open, their desperation at their plight increases.

The sad tragedy is that there are so many people just like Hina. The crowd at the distribution point are vociferous and jostle each other but a small contingent of policemen keep them in check. The earthquake has left hundreds of thousands of people homeless. And all of them have their own desperate story.

One man, a welder who had his own business, no longer has a home or a business. After making sure his family won't have to sleep under the stars in a tent sent by the French Red Cross, he will leave them to search for work in a town 40 kilometres away.

The loss of everything that one has worked so hard for is difficult to take. But amidst the despair, there is a happy smile.

"The Red Cross is doing a fantastic job, keep up the good work," says Vijay Kantilal Mandalia as he leaves the area, carrying a tent in his arms.

He too has lost his building supplies business as well as his home.

"We were happy before, we had achieved something. Now we have nothing and are living on a road. Whatever possessions survived the earthquake, didn't survive the looters. The clothes I am wearing, I have borrowed, even the shoes," he says. "What shall we do? I just don't know."

Nevertheless he is relieved he has a tent. "I knew before the earthquake of the work of the Red Cross. I knew I could go to them for help," he says. "We don't need food, just shelter. Nobody else has given us shelter - until now."

The Indian Red Cross has so far distributed more than 67,300 blankets, 4,200 tents and 6,100 tarpaulins sent from donor Red Cross and Red Crescent societies. With the International Federation targeting 300,000 in its appeal for Gujarat's earthquake victims, the emergency relief operation is set to continue for a few months still.
Posted by Bob McKerrow - Wayfarer at 13:48