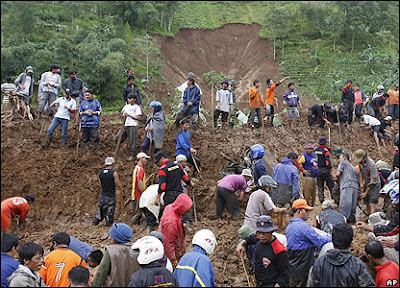 While many of us were celebrating Christmas here in Indonesia, heavy rains on Christmas day were starting to trigger landslides in several areas; Tawangmangu areas of Central Java, in Karanganyar district, and further south in Wonogin. Initial reports indicate approximately 88 people killed.

We are working closely with the Indonesian Red Cross (PMI)who have been out in the affected areas since word got out of the tragic disaster. Here is a report which I received at 2 am this morning.

Floods affected 5 districts on Central Java province during the rain with medium and high intensity that continuously happened in these three days. At the same time on 25th of December some areas were flooded. From the north of Java Islands; Grobogan districts; down to Surakarta; Sukoharjo and Wonogiri. Also in the middle of Central Java flooded Purwokerto district.

Based on the report from PMI Grobogan district branch, areas that flooded are :Getas Mayakan sub-district, Kalangan sub-district, city of Purwodadi district and Penawangan sub-district. The flood happened on 25th of December at 23.00 pm local time. Rain poured down continuously and caused severe flooding. Based on the report at noon, there were 3 houses damaged (rapid assessment still on going). Some peoples were force to move in to a sport centre and schools because of the high level water.

In Surakarta city, the flood occurred on 25th of December at 01.00 am local time. The areas that affected are at river sides of Bengawan Solo and Sewu village. High continuously rain on a day caused overwhelm of the river. The highest water level reached to 3 meters that inundated houses. Activity was focused on evacuated peoples to safer places and assessment.

Sukoharjo district flooded on 25th December at 01.00 am local time. Continuously rain on a day caused the flood. There are 6 sub districts affected: Nguter, Sukoharjo, Selokarto, Grogol, Mojolaban and Sukoharjo. Numbers of casualties is 2 dead.

In Wonogiri the flood happened at 01.00 am local time on 25th of December. One day of heavy rain caused the flood. Landslides occurred and 13 people reported dead. (further assessment still on going).

Flood have caused disruption to all community activities because their houses were flooded and access roads were inundated.

Meteorological and Geophysics Agency (BMG) send alert on 25 – 27th December, high intensity rain will be a hazard in all parts in Indonesia. And for strong winds forecast on 28th – 31st December will hit in South of Sumatera, West part of West Java, Central part of Central Java, some parts of East Java, South Kalimantan in East parts, South of Sulawesi, Bali and East Nusa Tenggara. Speed of the winds predict reached until 30 knot.
Posted by Bob McKerrow - Wayfarer at 16:29

Email ThisBlogThis!Share to TwitterShare to FacebookShare to Pinterest
Labels: Indonesian floods and landslides