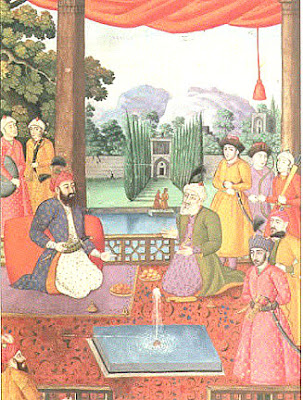 O garden you inspire me too
Here I read Khalilli through
And see the Afghan Persian interface
In a city that has forbidden the juice of the grape.

I saw my first Persian influenced garden at the Taj Majal in 1975 and a few years later, journeyed to Kashmir where I saw the wondrous Shalimar gardens. Between 1993-96 I worked in Afghanistan and especially in Herat, saw magnificent Persian gardens. The poem above. was written in one of those gardens.

For more than three thousand years, the Persian garden has been a focus of Iran's national imagination, influencing its art, literature, and even religion. The Persian garden's inspirational role has, however, extended far beyond the land of its origin; its precepts have exerted a profound influence on garden design around the world. The Persian garden starts from the magnificent sanctuaries and hunting parks of fifth-century b.c. Persepolis to the magical nightingale gardens of nineteenth-century Tehran. All were seen as a kind of earthly paradise (the English word paradise has its roots in the old Persian word pairi-daeza meaning a walled space).
Posted by Bob McKerrow - Wayfarer at 22:24