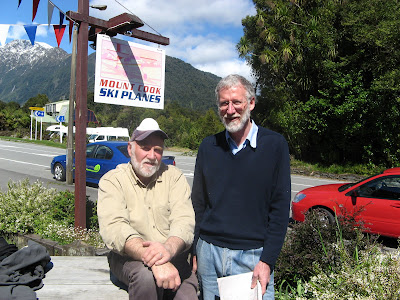 caption : Alex Millar left and Bruce Watson right, outside their combined premises at Franz Josef where Alec has his ski plane business and Bruce a great bookshop

In the coming months I want to reflect on some of the important people in my life that have influenced me, helped me and are close driends.

Alec Millar and Bruce Watson are legends on the West Coast of New Zealand's South Island. I first met Alec in 1967 as a young mountaineer at Mt. Cook and then in 1971 as a daring ski plane pilot, he played a key role on a mountain rescue when I was working as a mountain guide for the Mt Cook National Park. He was one of those magnidicent men in their flying machines with the dash, daring and handle bar moustache. In the early 1990's Alex, Bruce and I worked for the Department of Conservation, Alex and I at Franz Josef Glacier and Bruce our boss in Hokitika. Bruce and Alec were then at the cutting edge of conservation and interpreting the landscape and their processes. Bruce pioneered new visitor centres at Reefton and Haast while Alec was the best living interpretor of the West Coast glaciers and their processes. We all left the Department of Conservation in the 1990's, Alec became an owner of the Mt. Cook ski plane operation, Bruce bought bookshops in Hokitika nad Franz Josef, and I went back to work for the Red Cross in Afghanistan.

In 2006, Alex and Bruce got back together at Franz Josef Glaceir township, and Bruce has a boutique nookshop in Alex's ski plane booking office.
Posted by Bob McKerrow - Wayfarer at 15:17

Email ThisBlogThis!Share to TwitterShare to FacebookShare to Pinterest
Labels: Legends of the West Coast of New Zealand

Very good story about these men, I think the rescue in the mountain is so amazing and so stronge to do.

Interesting storu and so brave maan, but I hate heights, so I prefer read storyes and see photos he he

I think that it is great that they have a business like that. I really like skii and I want to do it in my next vacation.

Your article is very good and very different. Your post will be very useful for me because I like these articles very much, I am thankful that I found this post.

Hello friends, its impressive article regarding educationand entirely defined, keep it up all the time. 메이저사이트

This design is incredible! You definitely know how to keep a reader amused. I was almost moved to start my own blog 토토사이트

Fantastic job. I really enjoyed
what you had to say, and more than that, how you presented it.
Too cool! 바카라

I am actually grateful to the holder of this site who has shared
this enormous article at here. 토토