Competing with Yoko Ono and John Carey at Bali 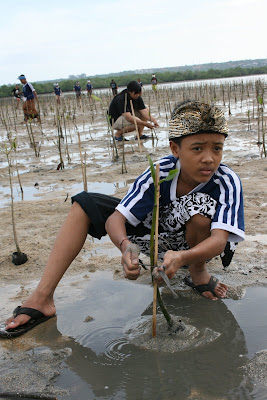 Yesterday afternoon I was invited to be on a panel for the Tsunami in Indonesia and joined Mar’ie Mohammed, Chairman PMI and Kuntoro, head of BRR in the Indonesian Pavilion. The turnout was poor, around 20 journalists. We discovered that at the same time, Yoko Ono and former President hopeful, John Carey were billed together at the same time at a nearby venue.They drew a capacity crowd.

In the main conference, progress is slow, painfully slow. The next few days will reveal more clearly where the negotiations are heading.

Today, the start of the second week of negotiations at the Climate Change Conference in Bali, the various contact groups were intensifying efforts to maximize progress before the arrival of Ministers for the High-Level segment beginning on Wednesday.

Talks on a future agreement continued today, and among the topics under debate was the need for quantified national emission objectives for industrialized countries - guided by the range of 25-40% reductions by 2020 – and the need for emissions to peak in the next 10-15 years. Parties also acknowledged the need to strengthen existing commitments and enhance their implementation, especially with regard to developing countries.

According to estimates by the International Energy Agency (IEA), fossil fuels will remain dominant in decades to come, accounting for between 72% and 81% of global primary energy in 2030. Mr. de Boer stressed, however, that “we cannot afford to let the industralized countries’ climate-unfriendly growth become the global norm.” With investments and the wide deployment of appropriate technologies such as carbon capture and storage, he said, “the fight against climate change need not be a fight against oil, but rather a fight against emissions.”

He went on to explain that significant emission reductions can be achieved with existing technologies or those that are closing to becoming commercially available, but that more incentives were needed “to push technologies out of the laboratories and into the market." He added that the carbon market was a key tool in achieving this.

Since the private sector will account for 86% of projected investments in 2030, businesses, he said, were “the key to a low-carbon future,” underlining that appropriate government policies were neeeded to create the right conditions for private investors. These could include binding targets, tax incentives and policies to promote the shift to less carbon-intensive energy sources.

According to the Stern Review Report on the Economics of Climate Change, markets for low-carbon energy products are likely to be worth at least 500 billion USD per year by 2050. Mr. de Boer pointed out that the transition to a low-carbon economy could become a platform to new economic growth, new jobs, new manufacturing and service industries and new markets. Responding to climate change, he said, was creating windows of opportunity, and that “instead of closing the shutters, the opportunity must be seized.”
Posted by Bob McKerrow - Wayfarer at 01:09