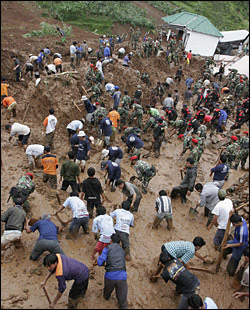 Caption: Reports from the affected region suggest that landslides have so far claimed at least 80 lives. A local official has claimed that these landslides are the worst to hit the region in 25 years. (Reuters/Stringer)

It was a busy day yesterday as the news of the landslides and flooding in Java reached us here in Jakarta. We have been in touch with the rescuers and my colleague Ahmad Husein wrote the following article for our website in Geneva. The Indonesian Red Cross continue to do an amazing rescue, relief and ongoing assessment in the large affected area. The International Federation in coordination with PMI's national headquarters in Jakarata quickly responded to the disaster, releasing 1,500 hygiene kits from Surabaya and Yogyakarta warehouses to PMI's Central Java Chapter.

It was supposed to be a quiet holiday for Marsito, who, like many Indonesians, was enjoying a one-week, end of year vacation with his family. But that all quickly changed early on the morning of 26 December, when news came through of deadly landslides in at least nine areas of the neighbouring central Java district of Karanganyar.

Within hours, Marsito along with nine fellow Indonesia Red Cross (Palang Merah Indonesia – PMI) volunteers and three local health office staff were on their way to the worst-affected sub district of Tawangmangu, where more than a day of heavy rain had caused catastrophic land slips, claiming at least 37 lives." I know today is a holiday. But to help peoples in disasters like in Karanganyar is more important than a holiday," Marsito says.

Marsito and his team brought with them five ambulances to support the rescue work already being coordinated by local authorities. However, roads to the disaster site hade been cut by landslides, and it took them about three hours to reach Tawangmangu. Marsito described the situation when he arrived: "Dozens of houses were buried under three metres of mud. No excavators had arrived yet, so we started to dig using any equipment to find the bodies."

The unstable and steep land made their work more difficult. But despite these challenges, the team worked hand in hand with rescue teams, police, the army, other volunteers and people from the community at seven landslide sites to rescue victims as quickly as possible. PMI volunteers also provided help for those who had been injured during the landslide or the evacuation.

Marsito is just one of thousands of PMI volunteers who are regularly and willingly mobilized whenever disaster strikes in this tragically disaster-prone country. He is a member of a group known as the KSR (Korps Sukarelwan or volunteer corps). The group is open to all Indonesian and foreign citizens above 20 years of age with a certain minimum educational background. Membership is organized by PMI at the district level and members receive regular disaster management training from PMI and the International Federation of Red Cross and Red Crescent Societies.

Reports from the affected region suggest that the landslides in Karanganyar have so far claimed 65 lives, with a further 35 people missing. A local official has claimed that these landslides are the worst to hit the region in 25 years.

The International Federation in coordination with PMI's national headquarters in Jakarata quickly responded to the disaster, releasing 1,500 hygiene kits from Surabaya and Yogyakarta to PMI's Central Java Chapter.

The International Federation has also cautioned that landslides, floods and other potential disasters in Indonesia will need to be carefully monitored as the rainy season continues across the next two months. "In this case, disaster preparedness is a critical issue for everybody includes both government and community," said Bob McKerrow, the International Federation's head of delegation in Indonesia.
Posted by Bob McKerrow - Wayfarer at 16:37

Email ThisBlogThis!Share to TwitterShare to FacebookShare to Pinterest
Labels: Landslides and floods in Indonesia

It's amazing to pay a visit this web site and reading the views of all friends about this article, while I am also eager of getting experience.
Here is my web blog - 80th birthday party themes