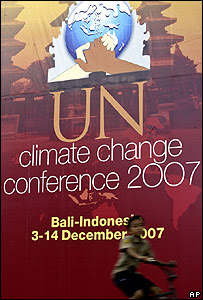 The news coming late Tuesday from the UN Climate Change Conference in Bali is not so good. The latest update from the New Zealand website: Stuff.co.nz

The European Union has taken a veiled swipe at the United States at climate talks in Bali over Washington's efforts to remove tough 2020 emissions guidelines for rich nations from a draft text.

The UN-led talks have become dominated by disputes over whether a final text, or Bali roadmap, should omit any reference that rich nations should axe greenhouse gas emissions by 25 to 40 per cent below 1990 levels by 2020.

Any watering down or outright removal of this non-binding range would anger developing nations, who are demanding rich nations do more to cut their own greenhouse gas emissions.

The row overshadowed the 10th anniversary celebrations of the Kyoto Protocol, which delegates at the Bali talks are seeking to replace or expand from 2013.

"In order to gather an effective fight against climate change we need this range of reductions for developed countries by 2020," he said.

The Bali talks aim to bind all nations to greenhouse gas curbs from 2013 but poor nations want rich countries to do more before they agree. Negotiators are working hard on a formula to draw in the developing world, particularly India and China.

The annual two-week talks are expected to wrap up by late Friday and negotiations usually go right up to the last minute.

"Good progress has been made but it's not a done deal yet," the head of the UN's Climate Change Secretariat, Yvo de Boer, told a separate meeting of finance ministers.

"It's probably going to take a couple of sleepless nights to bring all countries, rich and poor, on board."

Environment groups are concerned US-led efforts at the Bali talks could lead to the removal of any reference to 2020 guidelines. The United States says including the guidelines would prejudge the outcome of negotiations.

"We need to put a guard rail around the negotiations for the next two years," said Hans Verolme of the WWF environmental group. He said the 25-40 per cent range was needed
Posted by Bob McKerrow - Wayfarer at 11:45

What's up mates, how is everything, and what you desire to say regarding this paragraph, in my view its actually amazing designed for me.